The main campaign has 40 levels with four sub-levels. Said sub levels are stars, so when you complete one star you can move on to the next one and so on. The final star is where the “elite boss levels” are, and they are very tough! Fortunately, you can level up your weapons with the gems you earn in the game, and you can also change your weapons around to take advantage of their bonuses. Practice really does make perfect in Letter Quest: Grimm’s Journey Remastered. The game may sound short, but I promise you that with the increasing difficulty of each level, you’ll be spending several hours mastering this release. So far I’ve played for over 10 hours, and I’m having a lot of fun! 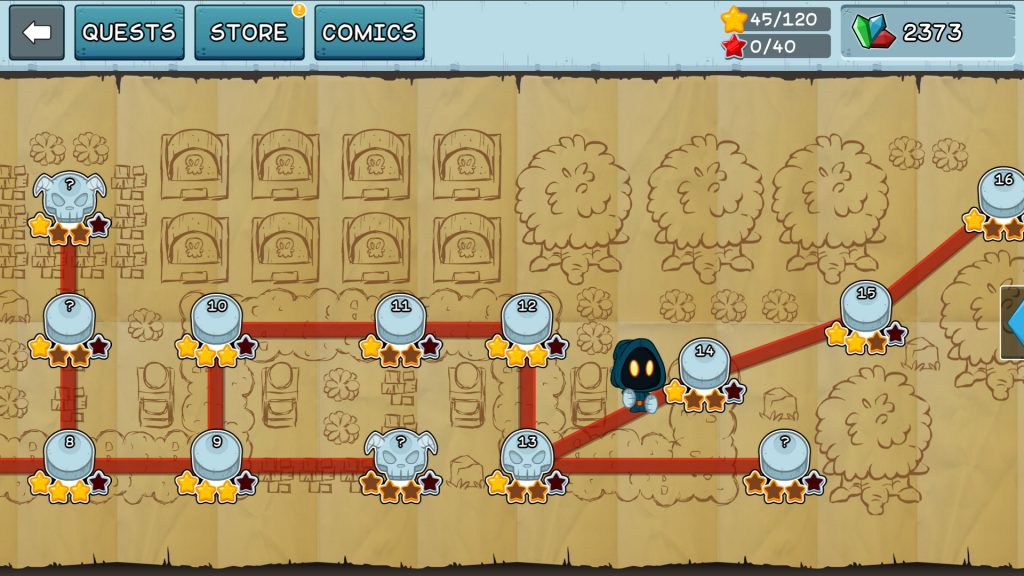 As for the gameplay, you are presented with a grid of words with tiles that closely resembles something like, say, Scrabble. You attack your opponent by forming words, and the longer the word, the bigger your attack – not to mention that longer words give you more points. Some letters have a higher value, as is the case of X and Z, which have three gold dots, while letters such as K and B have two silver dots. Common letters like vowels (A, E, I, O, U) only have one bronze dot. You must make the most of the letters available to you to deal massive damage and score big so that you can make the most of your time with the game. 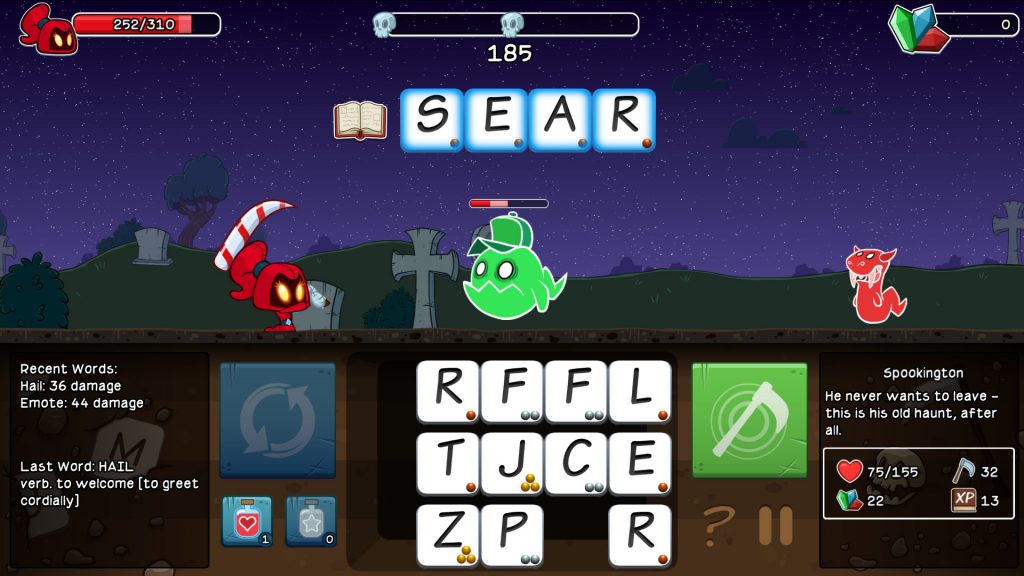 The enemies are cute and fun to play against. You will encounter bunnies with a feather duster, green sharks with a cap on, or a devil worm with huge sharp fangs – they are awesome and comical. Some enemies can use special attacks to, say, poison your tiles for a set number of turns, or turn some tiles to stone so you can’t use them. This makes it harder for you to string together a word, so be careful! 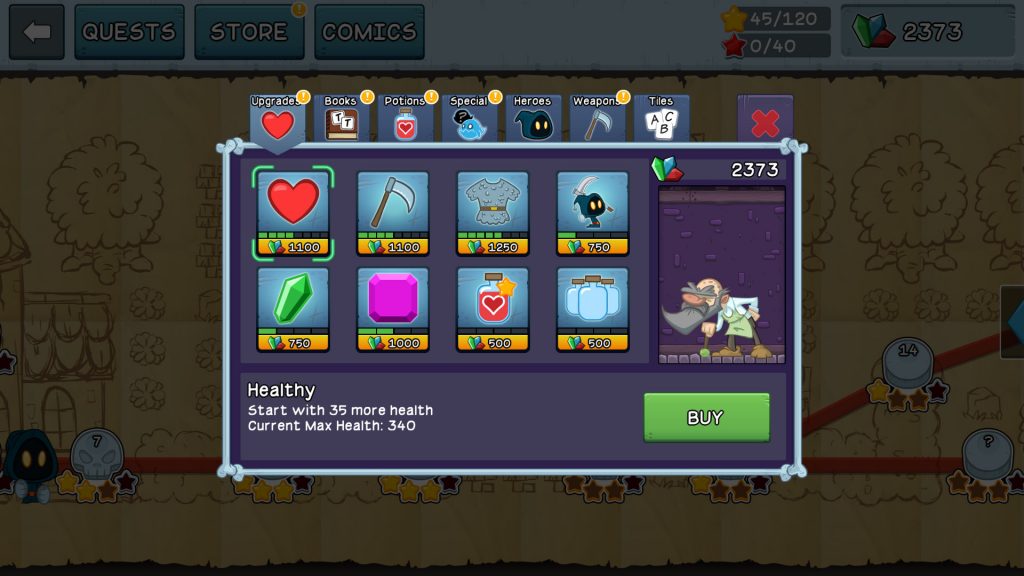 Some enemies, the bosses, in particular, can only be hurt in a certain way – for example, you might only be able to damage them by using four or five letter words or when using letters from the top and so on. Defeating enemies earns you coins and gems. LetterQuest has RPG elements so that you can upgrade your skills and weapons, buy potions and even secure new weapons and more. You can also earn EXP to unlock books which will help you with gameplay. You could, for instance, equip the Easier Guessing book that allows you to remove two letter choices from the treasure chest mini-game. 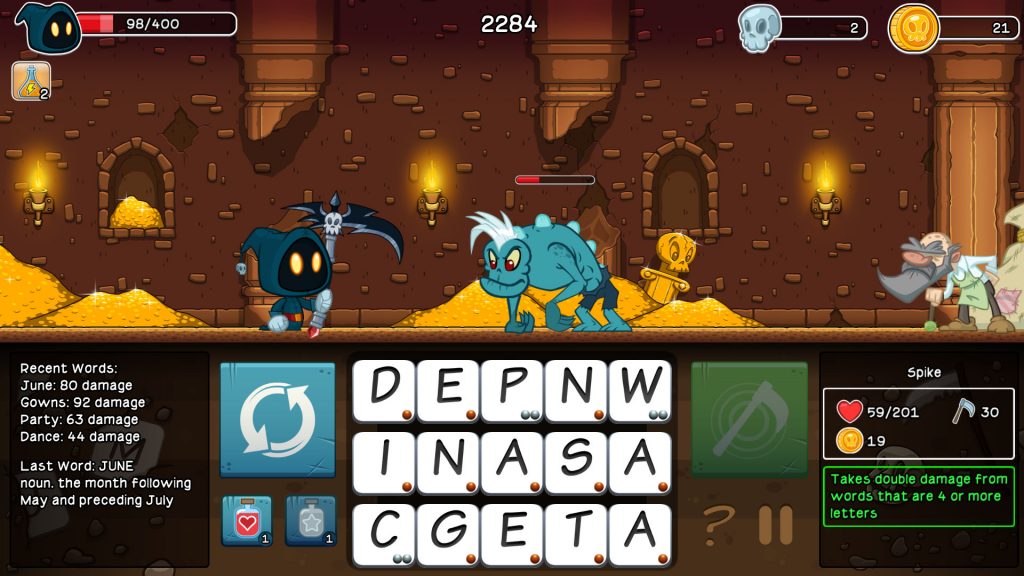 Along with the main Campaign Mode, there is also Endless Mode, which is incredibly fun to play. Its gameplay is identical to the main campaign, but you test yourself to see how long you can survive against an endless supply of enemies which get tougher as you progress. After hitting a milestone, you’ll be able to replenish your health meter so that you can try and keep going. 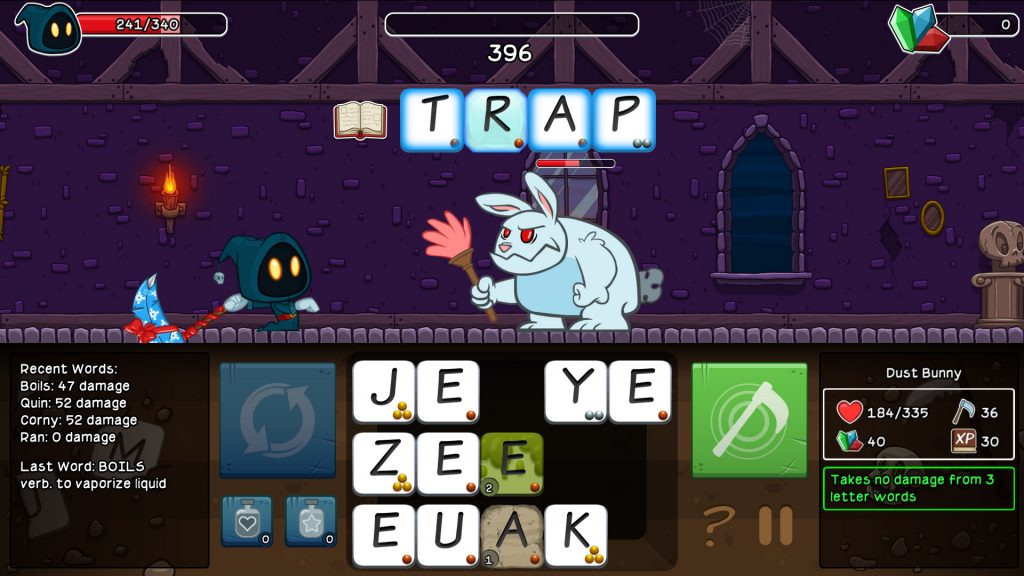 Indie release Letter Quest: Grimm’s Journey Remastered has a lot to offer, and it is a game you can play for hours and hours non-stop. I have been playing almost daily since I got started with my Letter Quest: Grimm’s Journey Remastered review, and I can confirm that it’s a highly addictive game! While it does not have a platinum trophy, there is not a single missable trophy in the list!

Disclaimer
This review is based on a EU PS4 copy of Letter Quest: Grimm’s Journey Remastered provided by Digerati. 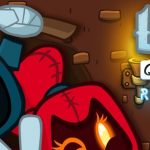 THE KING OF FIGHTERS XIV Demo Out Tomorrow!

Soul Hackers 2 Out Next Week