The characters from the Guilty Gear universe are back and once again ready to showdown to fight for the safety/destruction of their world. Where do you stand? Come read our review for Guilty Gear Xrd -REVELATOR-!


PLUG IN AND ROCK ON!
Guilty Gear Xrd -REVELATOR- rips along at a blistering 60 frames per second and features cross-platform PS4™ system/PS3™ system compatible battles. Choose from over 20+ insane fighters as you battle for glory in the post-apocalypse. New fighters, modes, and polished mechanics provide infinite ways to annihilate your rivals! Incite combo carnage at the push of a button with Stylish Type. Noobs and pros alike are now able to unleash devastating combos with extreme ease! 2D styled animation coupled with next gen cell shading techniques blur the boundaries between gameplay and interactive anime! Intense brawls, polished graphics and massive amounts of content ensure the fight is never over!

The masters of the fighting genre are back with their best game series, Guilty Gear! I’ve had a chance over the years to play quite a few games from Arc Systems Works, and they never disappoint. That being said, this is my first shot at Guilty Gear for review, so I couldn’t wait to dive into the game.

The first thing I thought when I loaded the game up was “Holy Crap!” This game is packing content to the brim – it features a Story Mode, Arcade Mode, Online Mode, Training Mode and much more. A stark contrast from SFV, which, while a good game, felt empty upon arrival. At one point it’s actually hard to figure out where to begin, but I recommend you go for the episodic story mode, giving you a story for each character. 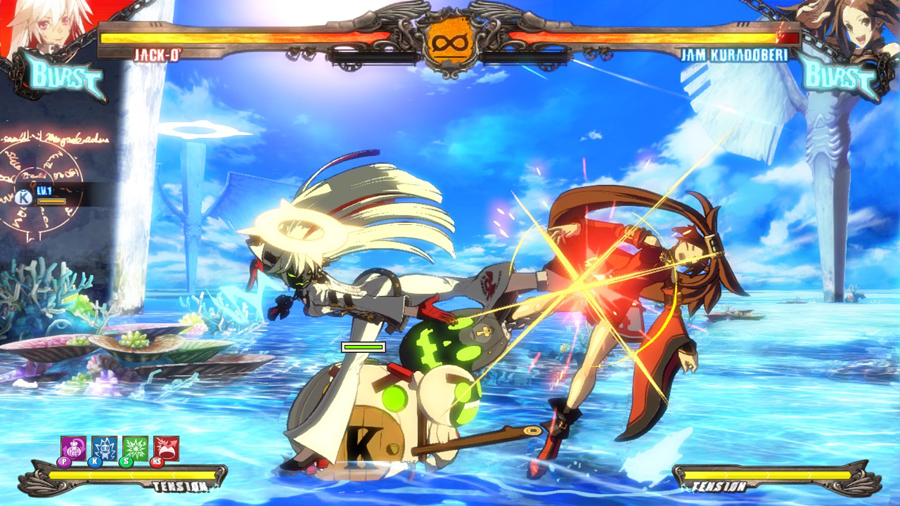 Immediately when starting a match, I noticed the excellent entrances of characters. It looks like they have solid 3D models, but with cell shading. This gives the game that incredible high polish you are used to seeing in GG games, but now allow certain moves to have 3D visuals, giving them more impact overall. All of the entrances for the characters were equally gorgeous with them often doing really cool things.

Characters are often one of Guilty Gear’s unique offerings in the industry and Revelator does not disappoint. You have your regular characters making reappearances such as Ky Kiske, Sol Badguy, and Chipp Zanuff, but also some new characters in Johnny returning from the XX series and Jack-O, who is a newcomer.


Overall it’s a really good cast, each with very different looks and play styles. Some of the standouts for me were Bedman, who seems to be comatose in his bed, but then his bed transforms into a fighting machine, which he seems to be able to control through his mind! Jack-0 is also really cool as she lays ghost boxes which summon ghosts on the battlefield and attack your opponent. The ghost actually level up throughout the match, and you can pick up the boxes too! This is a very interesting element I have never seen in a fighting game before. 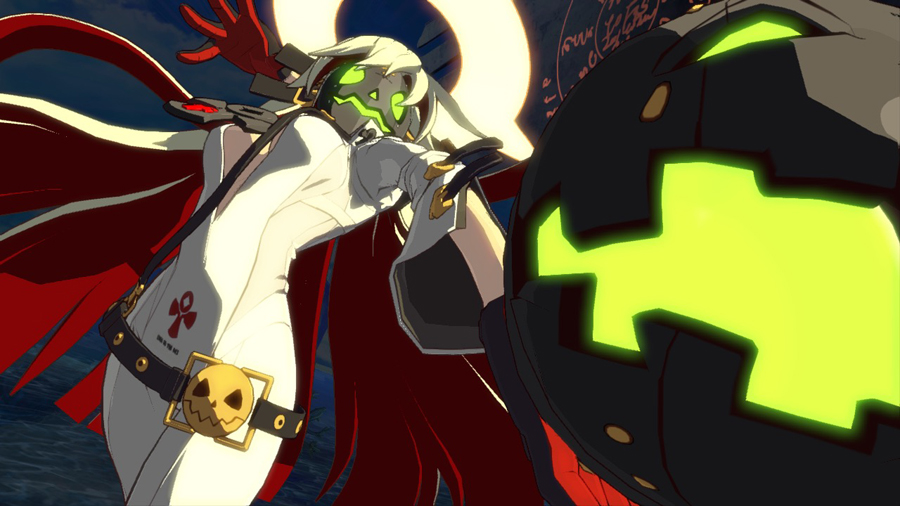 A lot of the other characters returning from the series keep their flair too. I started playing with Ki Kiske and got the hang of the fighting system. If you have played an Arc Systems Works games, you’ll feel right at home. You have a Punch, Kick, Slash, and Heavy Slash, and combining them with the left stick motions will allow you to pull special moves. If you’re not familiar with a character you can pull up a list of moves by pausing the game. Overall it’s very fluid and keeps the action going.

The game has a great tutorial mode that will walk you through all of the special moves including Bursts, Burst Overdrives, Blitz’s, Roman Cancels, and more. It will even get you comboing like a pro. This mode should be played by new players to the Guilty Gear series to get a hang of all of the mechanics. 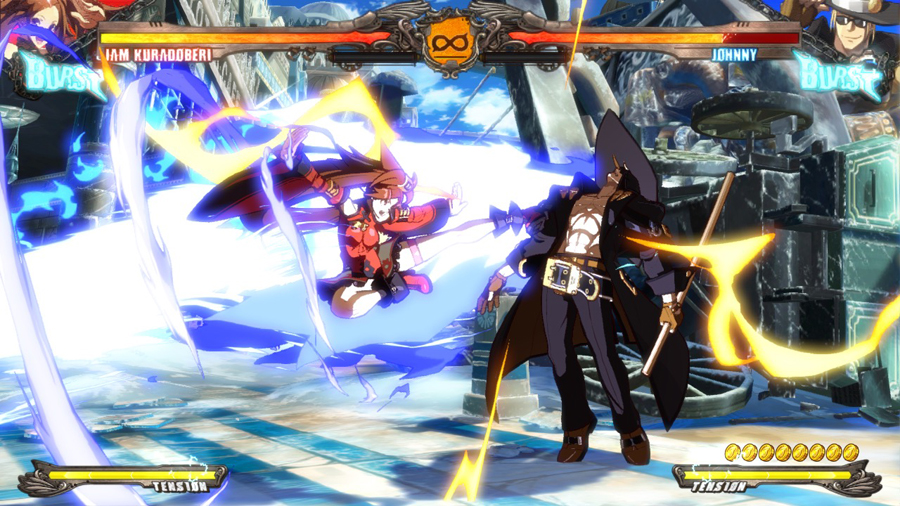 One big thing I liked about the game was the ability to instantly kill opponents. You could set your tension meter to be a timer and it gives a chance to do a move where if hit will instantly beat your opponent. There is a risk-reward system here, because if you miss the move or run out of time your tension meter disappears. This means no big moves or any other moves that need tension – it leaves you pretty defenseless the rest of the match.

The game’s online mode is really cool, actually dropping you off in a lobby full of Arcade machines. You can dress your avatar up and go and sit at a machine, and people can play against you. As I was playing a pre-release copy, there were not many people playing and the people who were playing kicked my butt, but overall it was a good experience – very fluid with no signs of lag.

The game has 43 trophies in total including 3 Gold, 13 Silver, and 26 Bronze trophies. Like most fighting games the Platinum is very skilled dependant but the larger bulk of trophies are attained for just playing through the different modes and spending a good amount of time playing online. 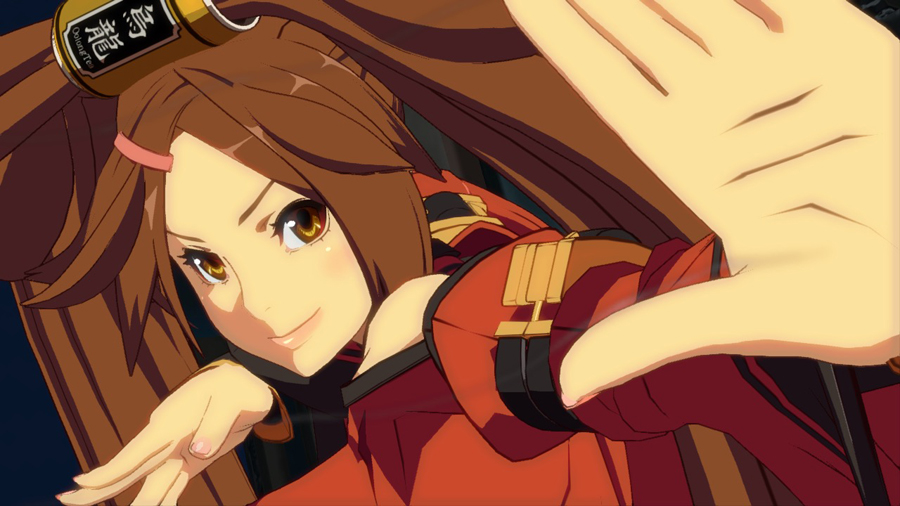 Guilty Gear Xrd -Revelator- is a great addition to the PS4’s library of fighting games. The game is gorgeous and due to the choices made in the art style it will continue to be gorgeous for years to come. The fighting system is fluid and fast, but gives you options and lets you think about how to attack your opponents. The character roster is great with new standouts like Johnny and Jack-0′, and the returning characters look better than ever. If you enjoy the fighting genre, then you should play this game right now! 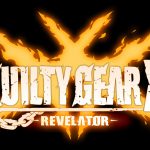