Anima: Gate of Memories is a third person action RPG that went to Kickstarter and did two separate campaigns that successfully funded to raise over $140,000 between the two. After a lot of hard work the game is now available for the PlayStation 4. Is this a game worthy of your time and money? Come read our Anima: Gate of Memories review to find out!


Anima: Gate Of Memories tells the story of The Bearer and Ergo who are members of the ancient society called Nathaniel. The Nathaniel order wants them to try and attempt to retrieve a powerful artifact known as the Byblos, which is a series of prophecies.

A fight with a powerful enemy fails miserably, the pair finds themselves in some kind of tower or castle. The Bearer, who is the main protagonist in the game, is 20 years old, and she works for the Nathaniel order as a hunter of nightmares. Many years ago she accidently woke up a demon called Ergo Mundus and made a pact with him while he was locked away in a book – this allowed her to use some of his powers. The Bearer lost her name as part of a pact with Ergo, which is why she is known as The Bearer. Ergo is a talking book , and when you switch to him, he turns into a demon brute. 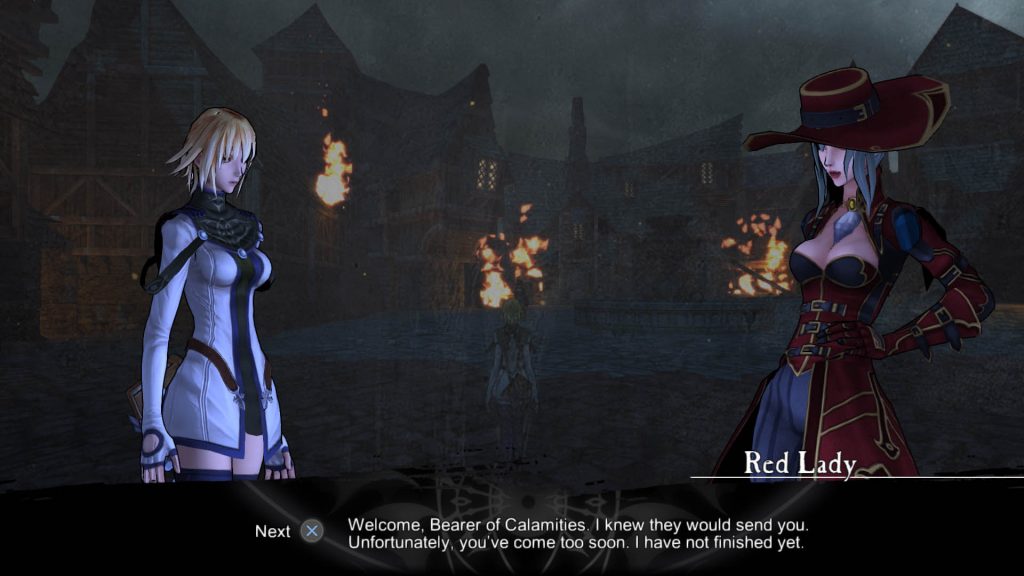 The castle The Bearer and Ergo find themselves trapped in is a massive maze-like building with lots of locations. Within certain locations are powerful bosses that are known as Messengers – you need to find and defeat all five of them, and they are incredibly tough to beat! I played then game on normal difficulty, and since you can’t switch difficulties when the going get’s tough, if you can’t defeat a Messenger you have to go back to another area and do some level grinding and search for better weapons, or you can buy them from merchants when you come across one. 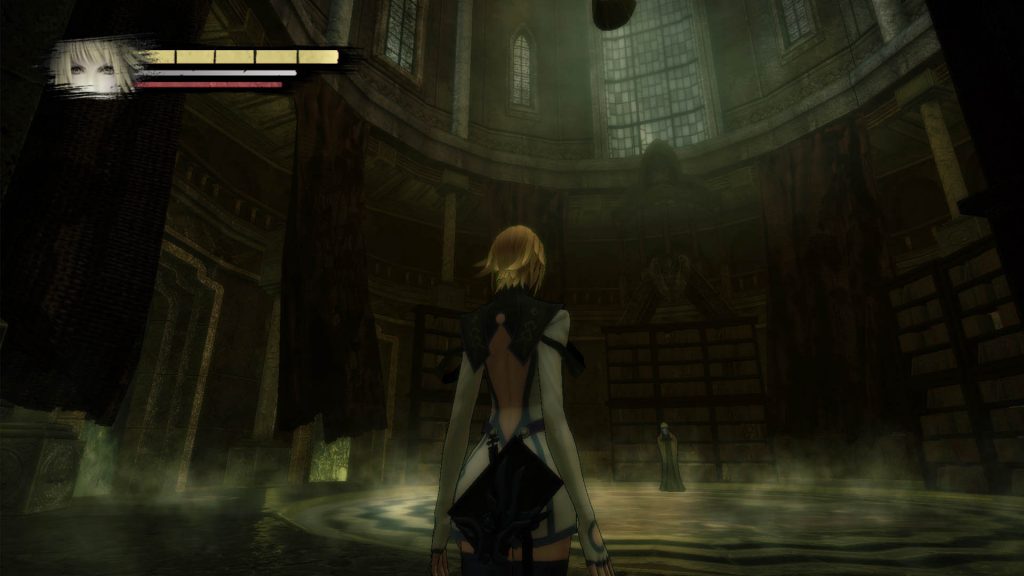 You have a range of magical and melee attacks which you can unlock via the skill trees, and both characters share the same XP but have separate skill trees. You have normal melee attacks with swords and such, and then you also have magical attacks like Launcher, which launches enemies into the air, Breaker which breaks the enemy’s defenses, and Circular Claws which can cause damage to multiple enemies, to name a few. The skill trees for Ergo and The Bearer are quite big! 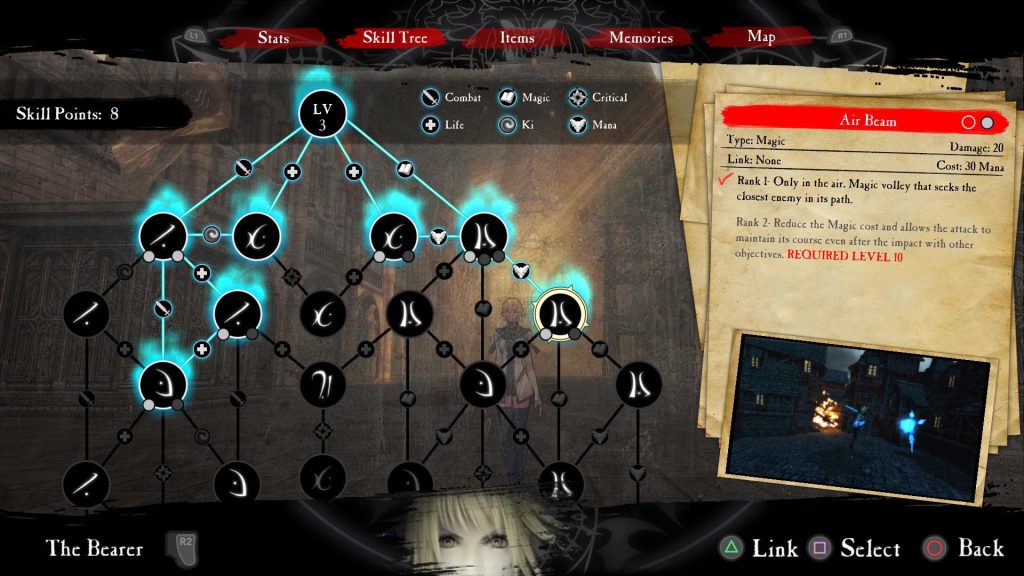 You are free to switch between The Bearer and Ergo at any time using the R1 button, which is nice since it happens instantly. Combat is real time so you must always be on the move and ready to strike at the right moment. You have to give it your all every step of the way, and don’t worry if you’re damaged in the process because once you defeat the enemies you can absorb their life energy and replenishes your health bar. 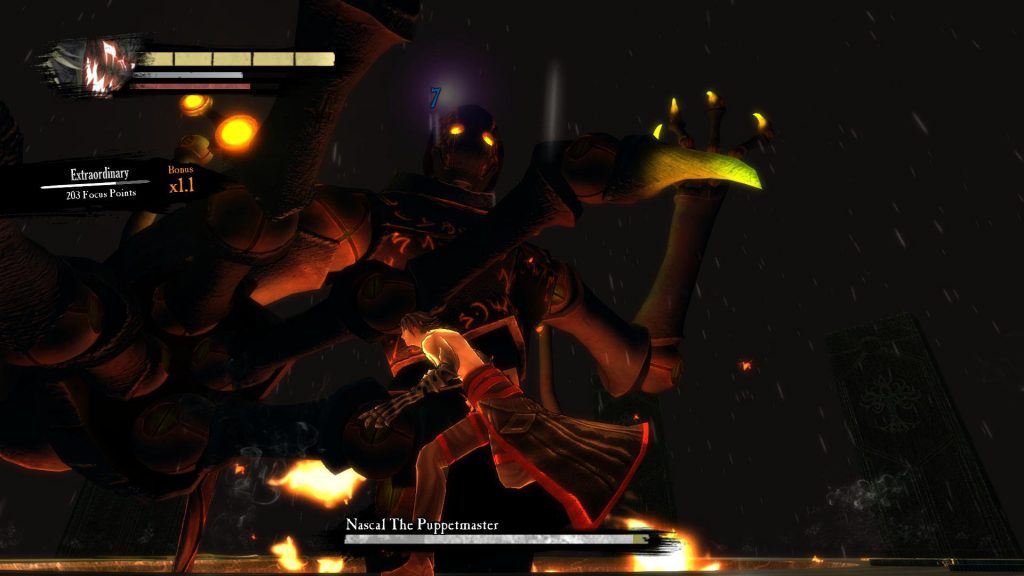 The game is a massive open world you can explore, and while I had a lot of fun with it, some of the locations are extremely hard, as is the case for the mansion section where there are rows of spikes that you have to get past. You don’t have much time to do this, so you’ll be doing a bit of trial and error here until you get it down right.

The game has multiple endings, so if you want to Platinum Anima: Gate of Memories you will have to play the game around at least twice and make good use of your save files. There is also a plethora of collectibles to find in the form of memories, items and weapons, and there is a trophy tied to finding everything. The game has dialogue choices which will affect the outcome of the game, so make a note of the choices you make, and in your next playthrough make different choices. Also, when you rest, you can talk to Ergo and discover a lot of information as you interact with him. 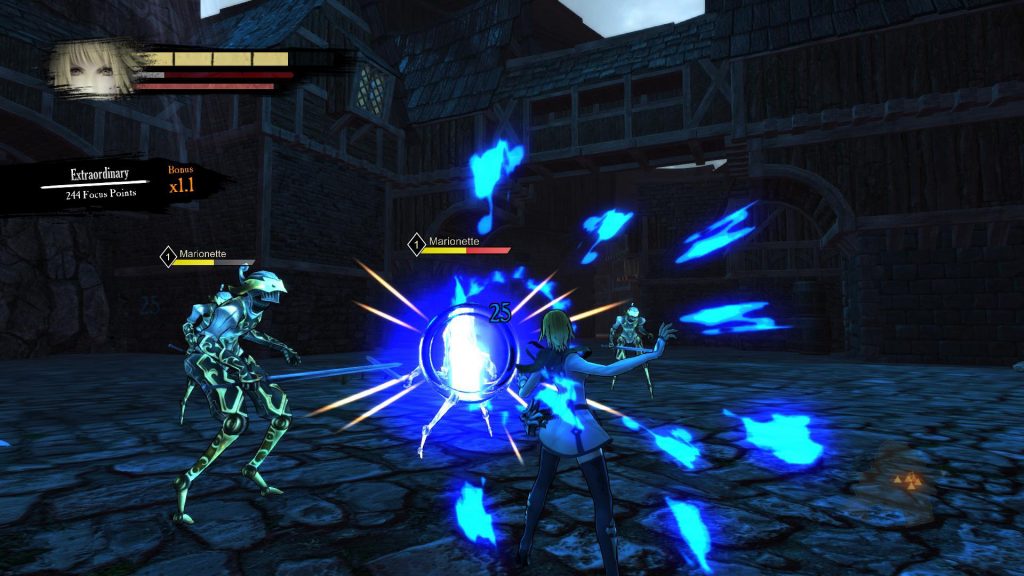 Overall, I liked Anima: Gate Of Memories and what it had to offer. Sure, it’s not an AAA release, but as a game created by a small team of three it definitely shines on Sony’s console. Other than a couple of frustrating spots, it’s more than worthy of your time and money.

Disclaimer
This review is based on a PS4 copy of Anima: Gate of Memories provided by Badland Games.