CD PROJEKT RED got in touch with us to announce they’re working on GWENT: The Witcher Card Game, a spin-off from The Witcher III: Wild Hunt. This will be a free-to-play release, and it is making its way to the PlayStation 4. Come check out the game’s trailer!


Pick your side — command 5 different factions: the mighty Nilfgaardian Empire, proud Skellige, brutal Monsters, cunning Northern Realms or shadowy Scoia’tael.
Build your deck — collect new cards and deploy armies full of versatile units, unique heroes and rule-flipping cards that summon fog to blind your opponent’s archers or call down dragon fire to destroy their strongest units.
Craft new cards — break down unwanted cards and craft new ones to build an ever-evolving deck.
Force their hand — with limited cards per game, lure your opponent into draining their resources!
Lose the battle, win the war — win the entire game by learning how to cleverly lose a round.
Hold the line — play your cards across three rows, infantry, ranged and siege, and build a formation to counter your opponent’s strategy.
Story Campaign — lead mighty armies during prominent events straight from The Witcher universe.
Friendly Matches — test your deck, try out new strategies, or just show off your collection of rare, animated cards.
Ranked Matches — rise through player-driven divisions and advance to the Pro League.

You can register for the game’s Beta by clicking right here. 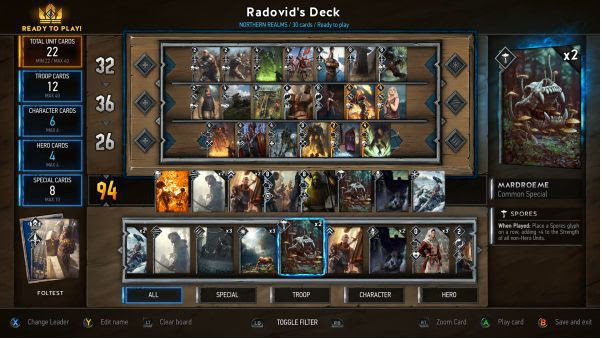 Reminder: Join us in the Chatroom for the E3 2016 Sony Conference THIS evening!