Aqua Kitty from Tikipod ltd. is a very fun arcade-style release available on PlayStation 4 and PlayStation Vita. There is a shortage of milk around the world, thus forcing cats to search for new sources from where to get their fix. Lead a team of milk mining kittens and overcome your fear of water to drill the ocean seabed as you search for a source of the vital liquid!

I had no idea that the ocean seabed featured natural locations where fill-fat milk formed on its own, but considering this is a game where cats control a submarine and other vehicles in style, I guess “milk at the bottom of the ocean” isn’t really as crazy a premise as you’d imagine. 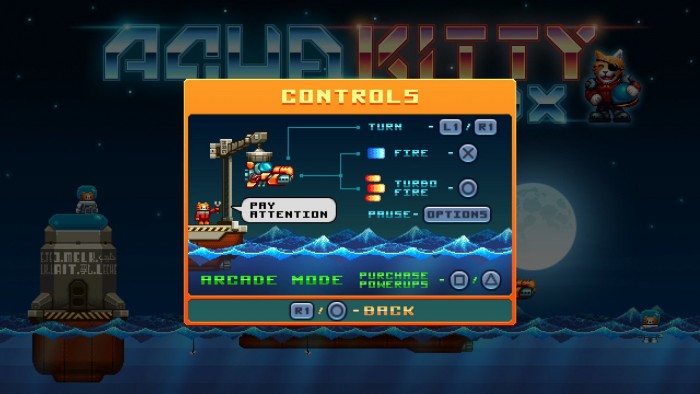 Levels in Aqua Kitty are short and to the point, always keeping you busy as you try to defeat each wave of enemies while also protecting the many miners in each level so that the aliens don’t end up abducting them! Enemies tend to spawn VERY close to milk miners, so be sure to always check your minimap to make sure you’re not too far away from them! This is even more important if you’re a trophy hunter because, as expected, there is a trophy tied to saving all miners in the game, so you better get to it right from the start!

As you fight your way through each set of levels, you’ll be collecting resources and learning the movement and attack patters of each enemy type so that you can apply everything you’ve learned once you reach a boss fight. You’ll have to defeat a very hard wave of enemies as well as a huge and nasty boss, and yes, miners can still be abducted during these fights so you better be in high alert at all times!


You can read the original review for Aqua Kitty right here.