Homefront: The Revolution is a guerilla warfare first-person shooter, set in 2029 Philadelphia.You play as Ethan Brady, a new member of the resistance. This time, the occupying force is the North Koreans, referred in the game as the Norks. Upon booting up the game, a cutscene shows the rise of North Korea’s wealth and climb up the technology ladder from the 1950’s leading up to the revolution. North Korea became the world leader in technology and the world’s wealthiest country.

A cutscene shortly follows that shows you are captured by the KPA (Korean People’s Army). After you make your way to a resistance safe house, you are tortured as a suspected Nork spy. Once they are satisfied they, want you to prove your worth so they let you join their ranks as a recruit. The whole cutscene lasts roughly about 15 minutes, and it is pretty disturbing… but I knew from that moment that HomeFront: The Revolution was going to offer a good meaty story campaign, so despite the disturbing opening scene, I was instantly hooked. 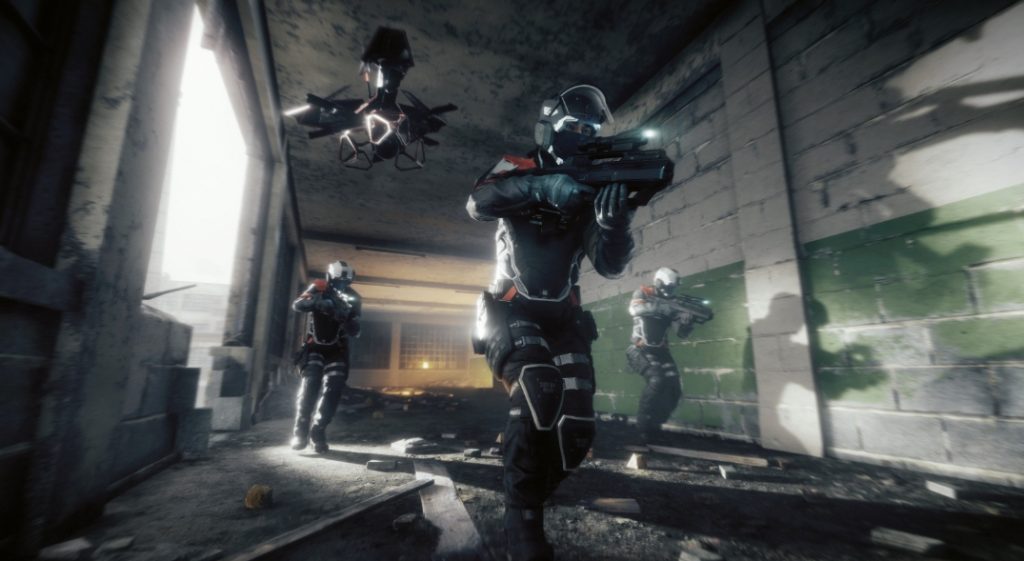 HomeFront: The Revolution is a tough shooter with a lot of weapons to play with ranging from simple pistols to Molotov cocktails and everything in between. The weapons are fully customizable, and you can add a wide range of attachments to them – the freedom with weapons is remarkable. Some weapons can be bought with in-game currency, while some can be unlocked using strike points tokens, which I’ll will explain shortly. The game shares some similarities with another game that I played in recent years. The mapping system is really simple and minimalist which is great, and it is also split into zones, which bears similarities to the original InFamous game. The more territories you take back, the easier the gamplay will be since the number of enemies will be lower. You take over territories by infiltrating and taking over strongholds. As you retake territories, the collectibles will start appearing, another similarity to InFamous. That is about as far as the similarities to INFamous go. The gameplay is very different which is what I am going to discuss next. 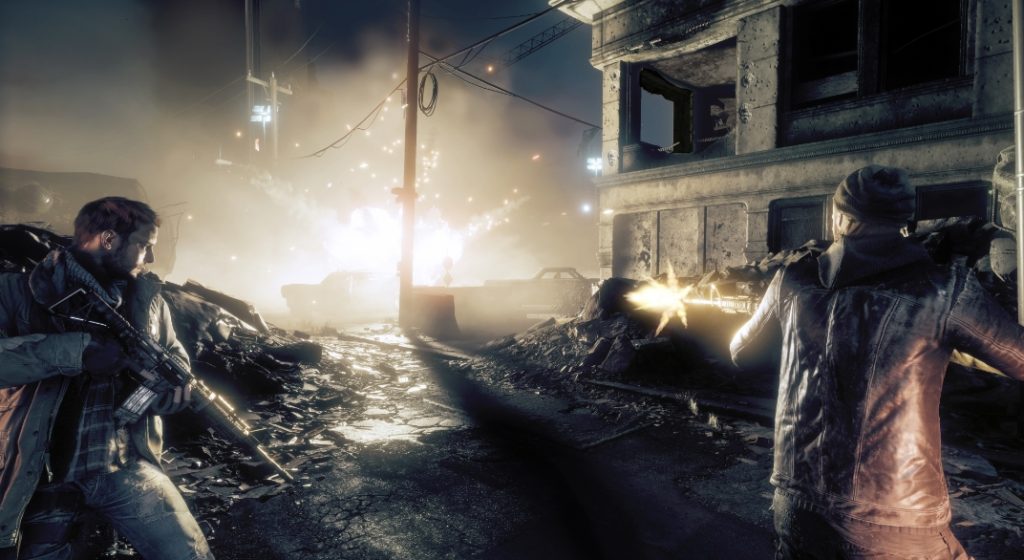 While plowing through the game’s main campaign, I found it wasn’t totally wise to stick to only playing the story segments for this review. Why? Because the game is very hard and even though there are three difficulty settings, no matter which difficulty you choose you will not get to your story destinations alive unless you complete some strike points – these are the aforementioned strongholds you need to infiltrate and take. Once you take a stronghold your map will turn blue, and the number of enemies will dwindle, which reminded me of Far Cry, with missions to rally up support or boost morale.


The KPA are a very powerful enemy, and they have much better weapons and tech than you, they basically have what you don’t, which is why gameplay can be quite tough, so you need to think before storming the enemy. Save some dollars and get better weapons and gear early on, because if you die, you will lose all your loot – but at least you get to keep your dollars, and you will respawn at the nearest safe house. 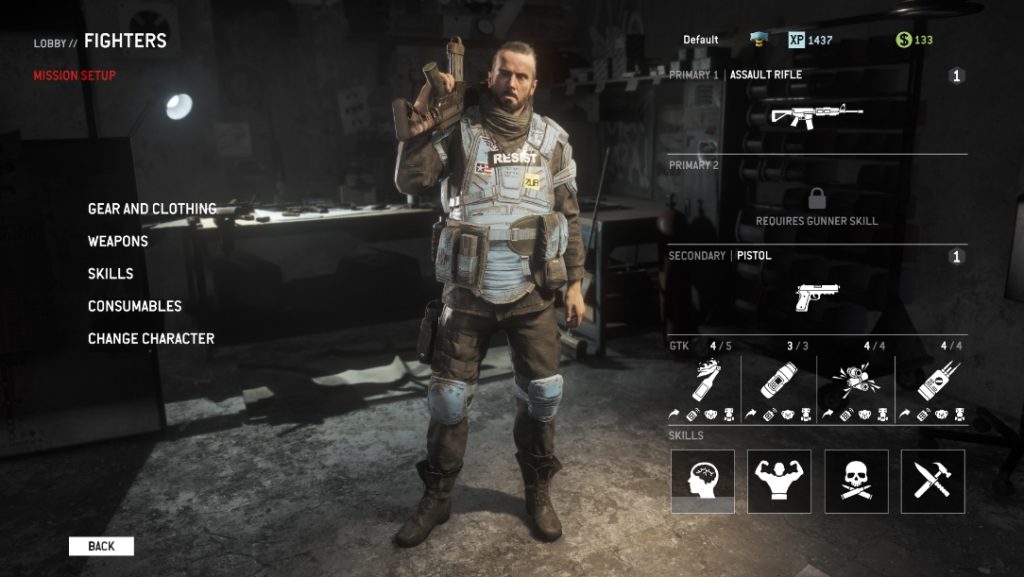 Your mission as Ethan Brady is to liberate Philadelphia and rid all eight districts of KPA rule. You have to secure the hearts and minds of each zone and capture all enemy strongholds to 100% the game, and this includes all story missions, strike points and jobs (side quests), You will be out manned and outgunned every step of the way, but you can recruit up to four other members of the resistance to fight alongside you to even things out. I would recommend having at least one rocket launcher in your team, as they can help you with cover while you sneak to your chosen destination. 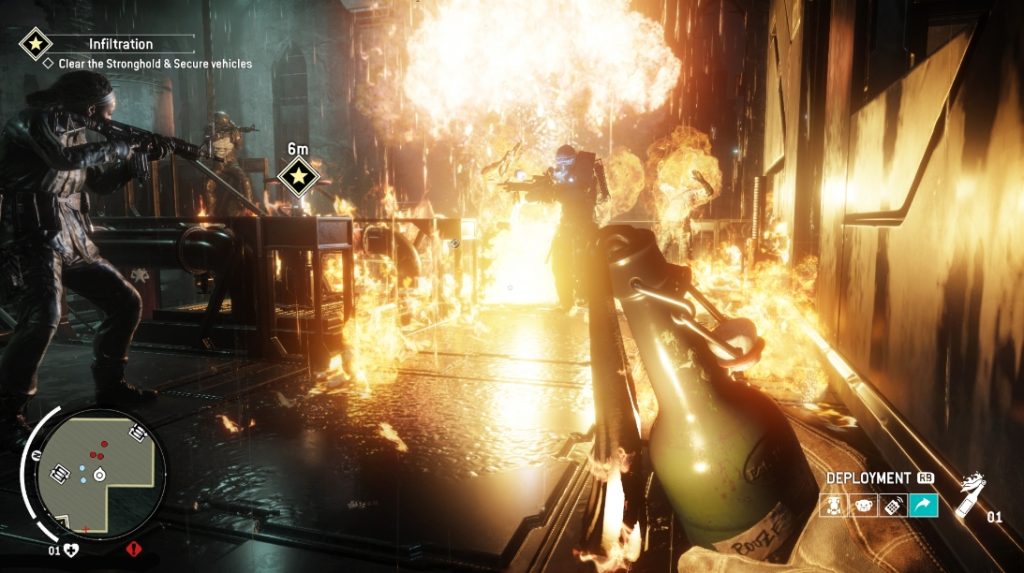 As I mentioned before, the weapons are fully customisable and convertible – you can convert a pistol to a Submachine Gun and that converts to a light SMG or turn a crossbow into a flamethrower… the list goes on! You can also buy gear like a bigger backpack or kneepads, hoodies and much more. You can also spend your strike points tokens – which are little circular red tokens – to buy weapons, upgrades and more. 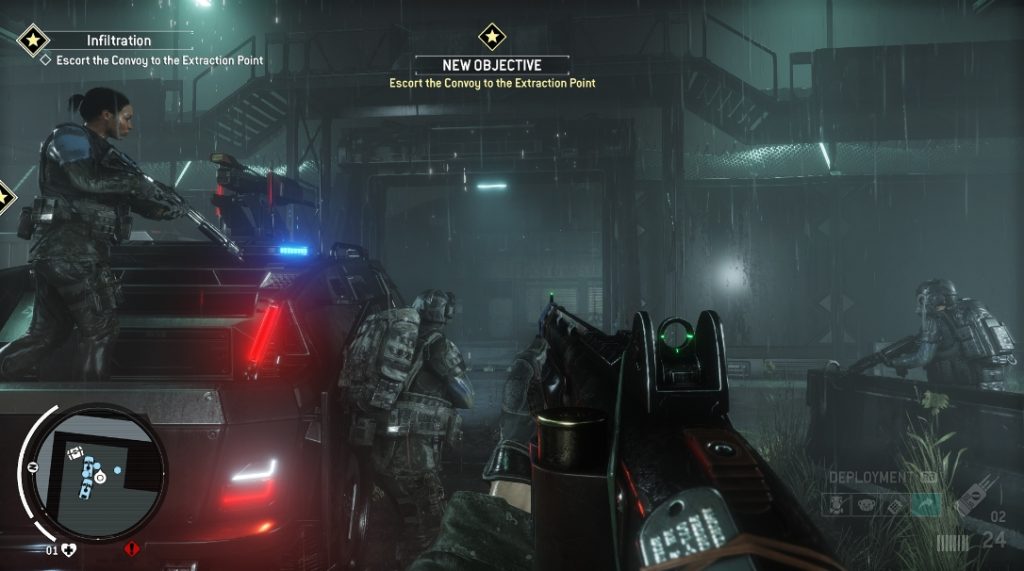 HomeFront: The Revolution is packed with different types of enemies out to end your life. You have seeker drones, tanks, rocket launchers, and choppers with lasers! Your weapons are useless against this kind of manpower, so stealth is absolutely important. If it’s big and looks though, slowly try to avoid any confrontation, or you’ll be killed in a handful of seconds!

The game has a simple crafting wheel where you can create bombs, Molotov cocktails and more, and crafting recipes are unlocked naturally through the story mode, so all you need to find are propellants, igniters batteries, and other simple items. You can only carry a limited number of times so as soon as you have the required ingredients hit your crafting wheel and start crafting away! I really liked the ease of use of the crafting wheel: just pick what you want to craft and hit R2 to craft it. 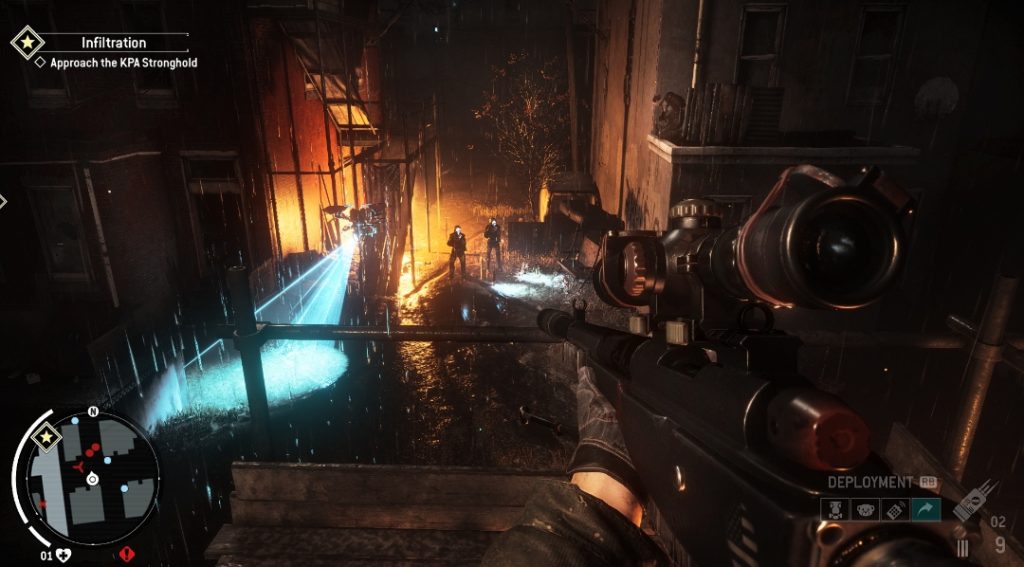 One of the main mechanics in the game is scavenging, and there is a ton of stuff to loot! You can loot dead bodies as well and sell what you have for some extra dollars to buy better weapons and gear! You will definitely need a tactical vest since it will reduce the amount of damage you take and that will set you back about $5,000, so collect everything you find.


There are also plenty of collectibles to find such as resistance stashes, motorbike sheds, radios, and journals. You have a smartphone so you can easily track everything you need to do, and you even have a camera to take photos for propaganda missions. You can also view your map and the location you are at with a push of a button on your smartphone. Cool, right? 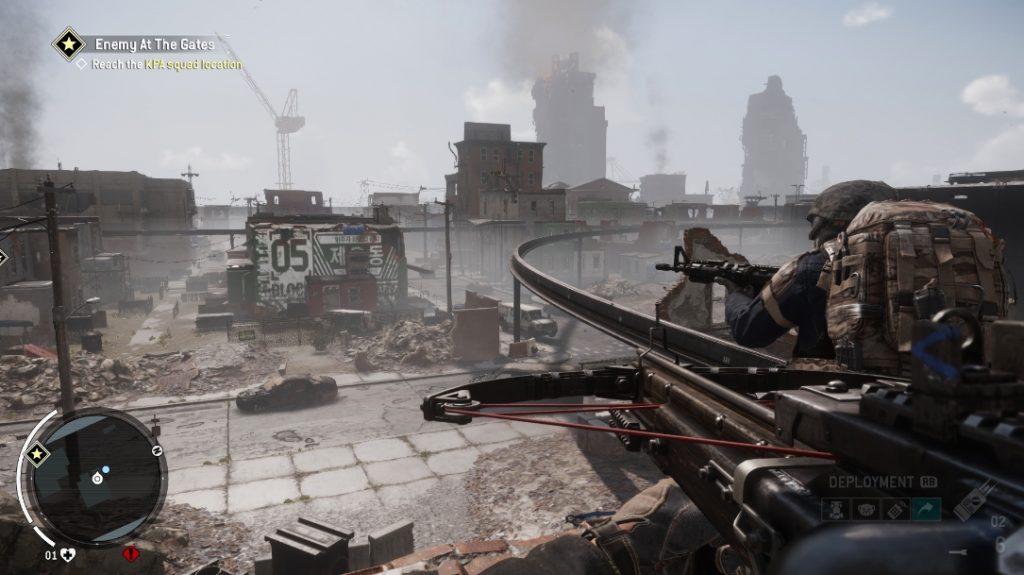 Homefront: The Revolution also offers an online mode called Resistance mode, in which you can play with up to three other players. There are six missions you can tackle with more to come in future updates or as DLC. These missions involve freeing prisoners or sabotaging important resources, to name a few. To be honest, I liked the main campaign more than I liked the online stuff, since it was beefier compared to the online, but to each to their own.

Overall I have had a brilliant week playing nothing but HomeFront: The Revolution! I would be all over a third installment of the franchise, so hopefully it sells enough copies for that. Other than some issues with the game’s framerate, which seem to occur when there are too many enemies on screen, and a bit of an issue with the aiming in crowded scenarios, the game is ver fun. The campaign is of a good length, with lots of variety in content and plenty of collectibles and side missions, you will never get bored. Dambuster Studios and Deep Silver deserve a lot of credit for what they tried to achieve and I have enjoyed their game immensely. The graphics are really good, and the story is excellent and will keep pushing you until the end. I highly recommend the game! 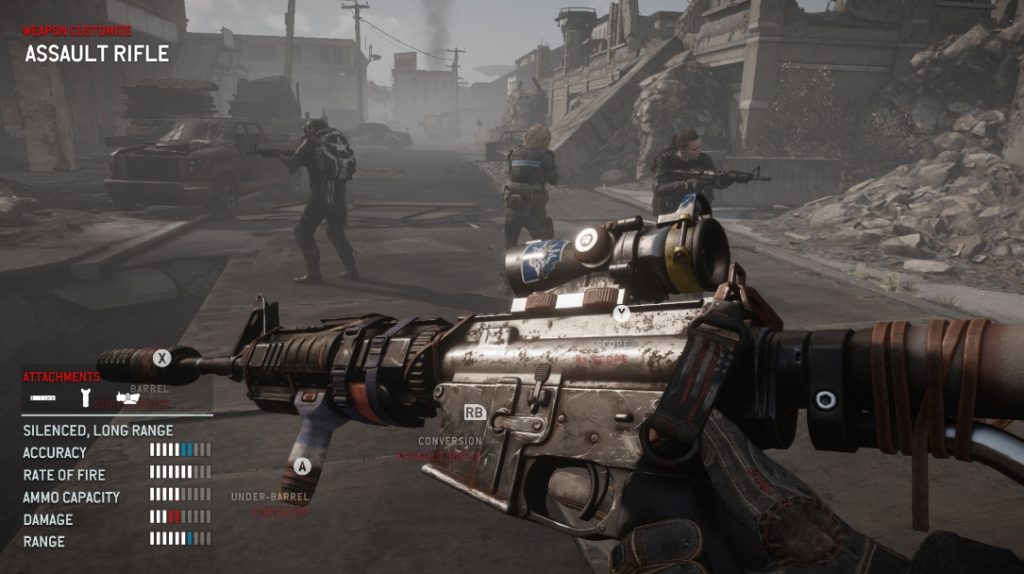 Disclaimer
This review is based on a PlayStation 4copy of Homefront: The Revolution provided by Deep Silver.

Are You Ready To Save In The Extended Play Sale?