Blast ‘Em Bunnies from indie team Nnooo (that’s two “n”, and three “o”) is a cross-buy and cross-save PlayStation 4 and Vita release currently available for $4.99/€ 4.99 as a digital game. This one can best be summed up as an arena-style “circular shooter” type of game where you take control of one bunny on a rotating turret who must survive the onslaught of enemy bunnies trying to take him out.


The game opens up with a short tutorial showing you the controls and some of the types of bunnies you’ll face in the game, as well as teaching you that after defeating a bunny you should definitely shoot the coin it leaves behind so that it can be added to your total. On top of this, sometimes power-up boxes will show up, and you must quickly open them to collect their contents because each one might grant you a fast-firing weapon, or perhaps one that has homing (carrots) shots that can quickly change the way a round is going… you might even get a healing item to recover some of the hearts you’ve lost! 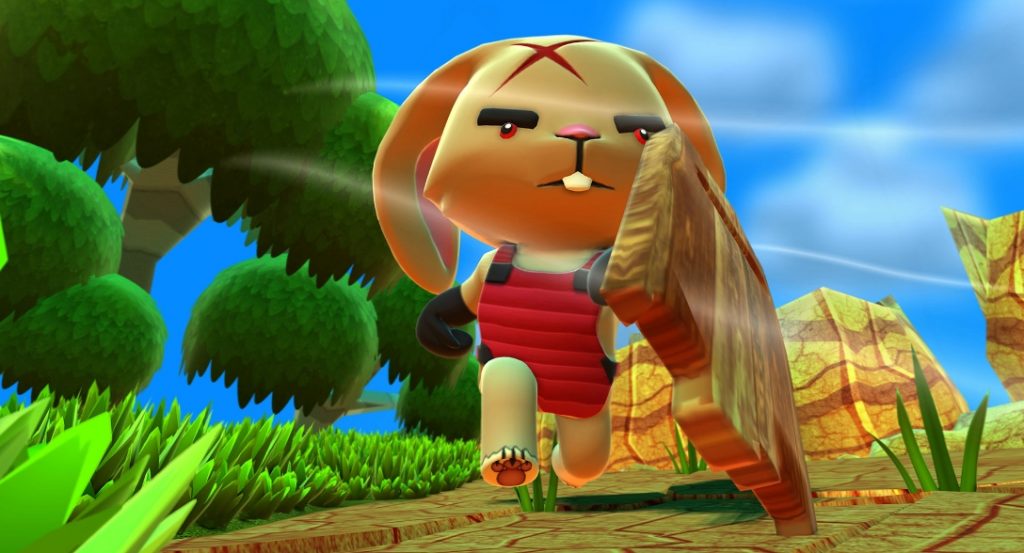 After the tutorial is done the game allows you to take on its many missions it offers, missions that help to keep you even more busy during your hectic gaming sessions. Said missions can either be a one-time thing (say, for example, defeating 20 Burrowers or 15 Blockers) or they can be daily missions (one in particular asks that you collect 10,000 coins), and completing them will reward you with some extra coins to keep your pockets full. 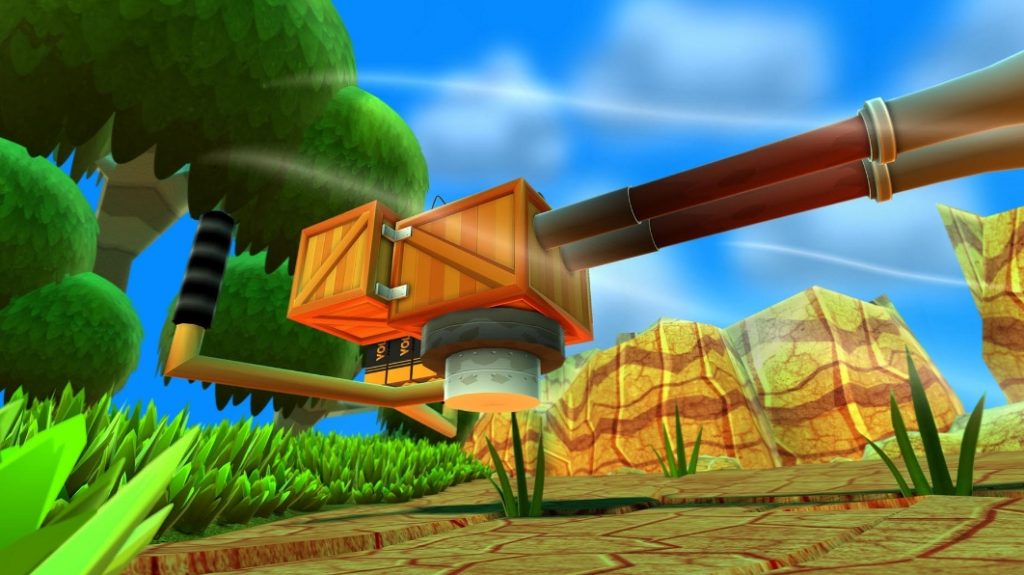 By the way, before you start with the game proper, be sure to download the currently free DLC option available on the store since it grants you a x2 multiplier for the coins you collect! Oh, and speaking of DLC, Blast ‘Em Bunnies has plenty of it! You can purchase other multipliers (which stack) to greatly increase the number of coins you collect which will in turn speed up the process of purchasing some weapons and permanent health power-ups for your bunny. On top of this, the game also offers skins for the bunnies (zombies, for example) and new arenas that change the level in which you play. If you like the game after your first couple of runs with it, then you definitely need to consider purchasing the Mega Bundle that unlocks the Clown, Luchador, Ninja, Urban Army and Zombie skins and arenas for the game as well as the 5x and x10 multipliers. To make things better, buying the DLC on one platforms instantly grants you access to it on the other for free! 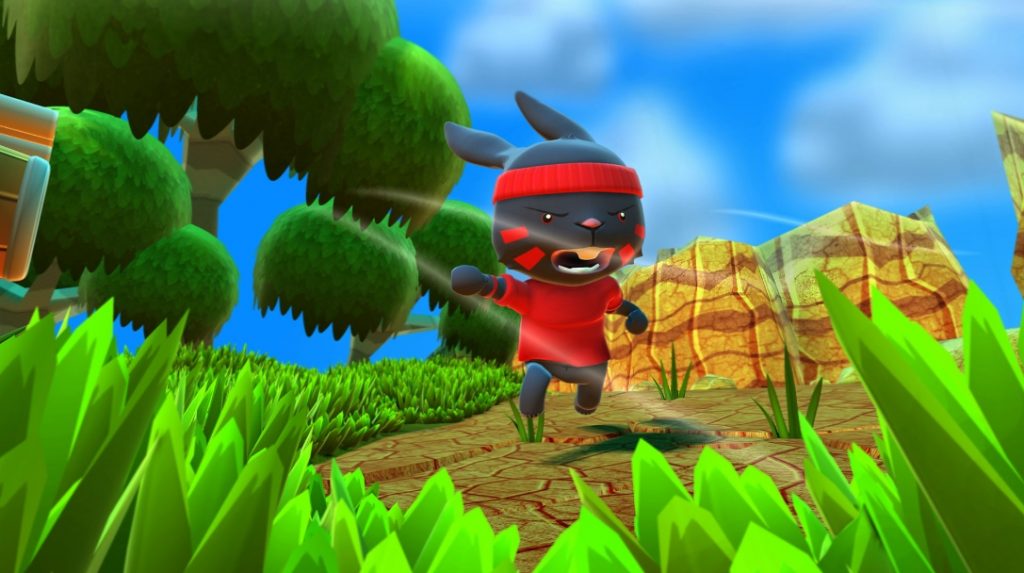 Blast ‘Em Bunnies also includes a Medal system that rewards you for completing specific milestones, such as defeating your first bunny, shooting a coin, defeating many bunnies within a short window of opportunity, surviving for a full day (which in the game lasts six minutes), or even for dying! There’s plenty more medals to aim for (some of which are tied to the game’s trophies), so you’ll never be bored as you play the game. 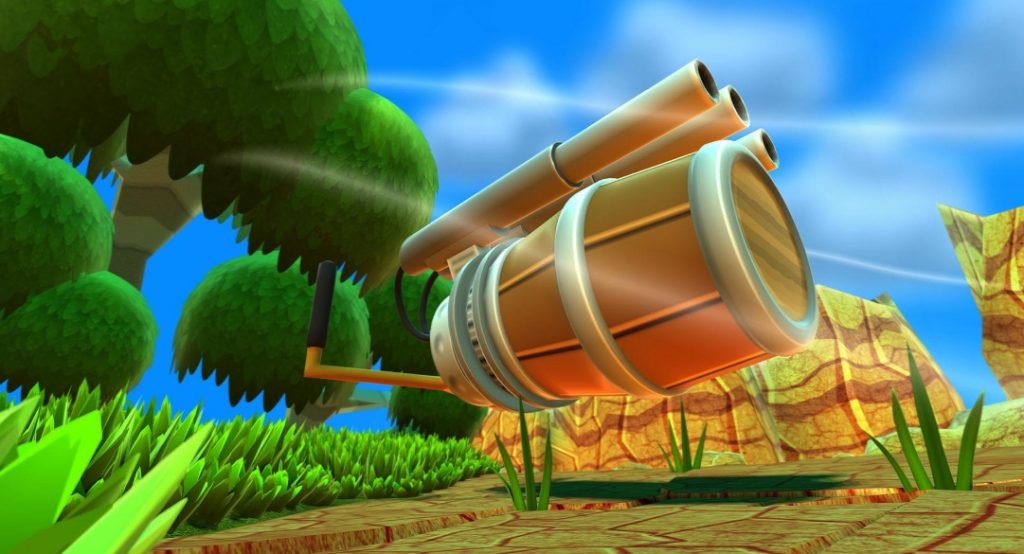 As you gain coins, you will level up, and leveling up will open up new missions for you to play, so the better you do, the more things you’ll have to do! And if you really want to extend your runs with the game then you should upgrade your weapon (and unlock new weapons) to include more barrels (the more barrels a weapon has, the more ammo it sends toward your enemy for each shot), different ammo types (heat-seeking ammo makes a huge difference!) or so that it can fire faster (the faster it can fire, the more enemies you can take out, but be sure to keep an eye on your weapon gauge so that it doesn’t overheat! Just because you can shoot more doesn’t mean you should not be careful). 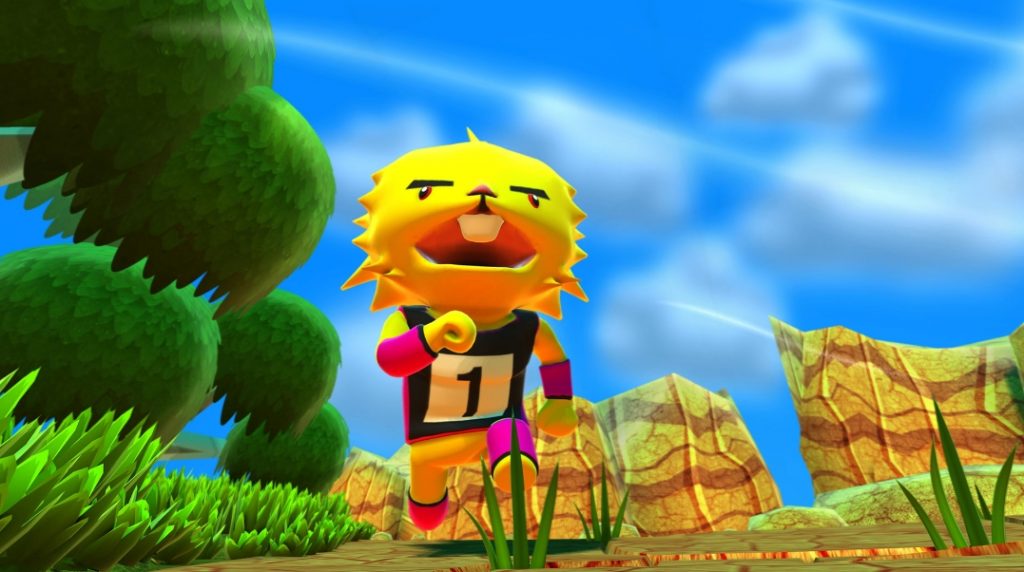 The enemies in the game are very varied as well, so you should definitely get to know them better so that you can have a chance against them:

Walkers: Slow and bulky. Watch out tho’ they pack a mean punch!
Runners: Fast bunnies who zig-zag towards you. They will leap up and attack if they get close!
Blockers: Slow moving with a shield. When you aim at them, they will take cover. Destroying the Shield will make them run at you and throw a pumpkin bomb. Kill them before they smash you with their shield or detonate a pumpkin bomb in your face!
Burrowers: Spend their time underground only popping up to take a look around, before diving back in again. Try to pick them off when they pop up for air! Watch out if they get close they will do a spinning headbutt!
Grenadiers: They like to sit back and throw Turnip grenades at you from a distance. Shoot the grenades before they get to you and then pick the Grenadiers off before they can chuck another!
Golden Bunnies: Every so often a Golden Bunny will leap out and start running round the arena. If you can shoot it in time, you will activate Frenzy mode! Frenzy lasts for a short period but during that time your weapon is maxed out, and you are invincible. Be careful tho as there are a lot more bunnies to contend with!
Throat Slitters: These evil sods have captured your babies. They will pop up from time to time holding one. Try to pick it off before it dispatches its captive and you’ll get a neat bonus. Try to save all 32 for a medal/achievement (can be completed across multiple plays).
Bosses: These huge brutes will jump into the arena from time to time. Shoot their plaster to weaken them fast and knock it down. Once on the ground its belly button will pop out. Shoot it enough and it will get back up and stomp, summoning more bunnies to deal with. If you can do that enough times, the Boss will be toast! 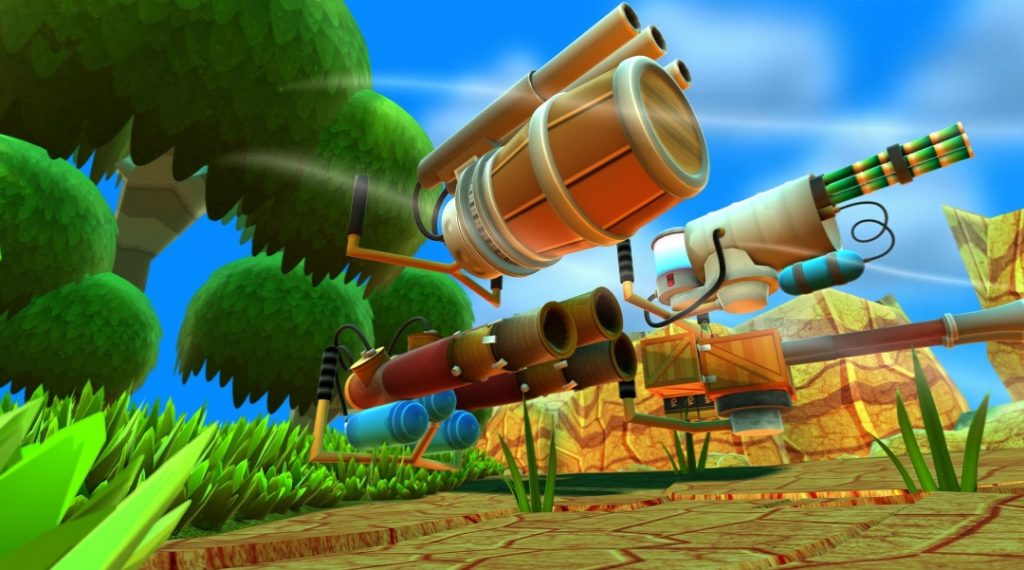 Blast ‘Em Bunnies is a fun arena-style release. It’s available at a budget price, so that anyone can take a crack at it. If you like your time with the game, then you should definitely consider purchasing some of the game’s DLC (or the Mega Bundle) to support the indie team at Nnooo for giving us this polished and entertaining arcade release. As a side note, this is a very colorful and animated release (as you’ve seen from the game’s trailer and the screens shared in this review), and my kids loved seeing me play the game… and my daughter even took over for a couple of rounds to help me get some extra coins I was missing for the next weapon upgraded we needed! So if you have kids, this is definitely a safe option to play with them. 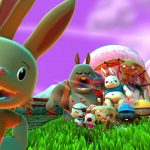 A Pair OF Resident Evil Games Now… On PlayStation Now!