Revisiting Ogden And His Friends in Dragon Fantasy: The Black Tome of Ice On PS4

Fortunately, since I had already played Book II, the PS4 version appeared on the PSN Store with the Free Purchase mention. Neat! If you didn’t purchase Book II previously, then Dragon Fantasy: The Black Tome of Ice will cost you $9.99.


So, how do Ogden and his friends look on the PS4? Well, it’s still the same game (it’s a port, not an HD Remaster) but I noticed a few minor enhancements that caught my eye: the text boxes seemed more fluid, and there are definitively a few new visual effects. Nothing major, but the game sure looked better!

The Dragon Fantasy franchise doesn’t take itself too seriously and is still very refreshing to play out. Almost every action an enemy does is silly, and the whole setting of the game is very fun! One of the other really neat feature of this game is ‘Smaaaash!!’, which allow you to bypass an enemy fight if you are over-leveled (pretty much like Earthbound did back in the day). I liked Dragon Fantasy Book II two years ago, and this new enhanced and glitch-free version is even better!

Not sold yet? There are a lot of other pretty nice features in The Black Tome of Ice. As I mentioned, its Cross-Buy with the previous release, but it is also Cross-Save. Just for the fun, I loaded my Cross-Saved game from 2 years ago, and I spawned right in front of the last boss! At that exact moment, I recalled that Dragon Fantasy also had a Save-Anywhere feature which was really great for play on-the-go. It also shares the trophy list with the previous release, so in my case, Platinum Trophy was already achieved (I reeeaallly wanted to brag about my Plat!). 🙂 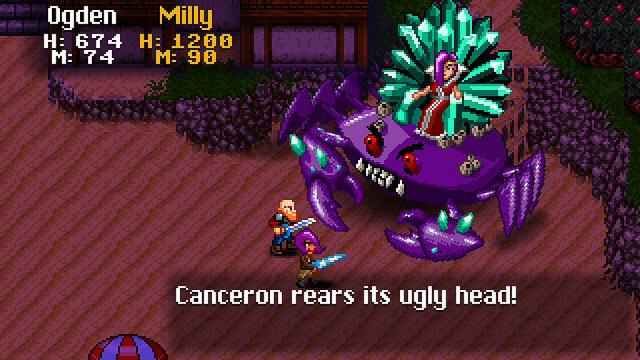 Two years later, Dragon Fantasy Book II (now called The Black Tome of Ice) is still a great game, and I still recommend it to gamers looking for a good RPG, or trophy hunters looking for a fun 15-18 hour experience. The battle system is good, and the dialog is fun to read. What’s not to like?