The world’s Tetrobots are broken, and you need to help repair them. Are you up to the task and ready to take control of the tiny Psychobot in order to help restore each one to its former glory?


Tetrobot is the world’s most popular and reliable robot, but he’s not perfect. That’s why I, Maya, have built him a microscopic little brother, Psychobot. Help me guide Psy through Tetrobot’s cogs and circuits: by swallowing blocks of matter and spitting them out, we can repair anything. Learn how pipes, lasers, fans and other electronic devices work, learn how to alter the chemical properties of slime, and collect all the memory blocks that you find on the way. The owners of damaged Tetrobots all around the world rely on us because we are the only people who can repair their precious robots.

Tetrobot & Co. is an interesting puzzler from Neko Entertainment. The basic premise is that you are controlling a tiny robot called Psycobot, and you enter each Tetrobot to repair it. The goal is to navigate the Tetrobots and find and restore their memory blocks.

The game itself uses the analog stick as a pointer, and you can guide the Pyhcobot with it around the maps. The maps generally consist of pipes connecting sections, matter blocks, lasers, different types of switches and slimes. As you navigate around you will find out that your Psychobot can pick up loose matter blocks and pipes to help you to get further. It starts off deceptively simple in the early parts, but as the game progresses, you are introduced to many different types of blocks including sand, wood, ice, steam, glass, metal and a few more. Each have their own properties: for instance, if you shoot the sand block through a laser it becomes a glass block, and shooting an ice block through a laser makes it become a steam block. You really think about how you use each one! 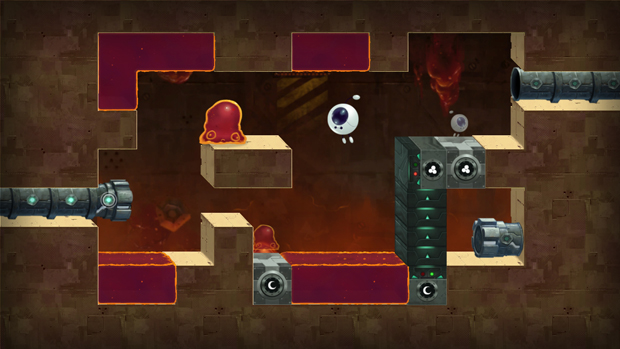 As you progress through the game, it throws different things that start to blend into all the levels such as water walls, gel walls, cannons, manual switches, and even portals. You really have to master and learn from your environment to figure out everything. The one thing that the game does well though is actually teaching you how to play it by using the introductory parts to show you to use the block and experiment with it. I actually found that I couldn’t figure out how to operate some switches to get the memory blocks, but after beating later levels and going back, it was really simple. Really great game design overall!

Psycobot can store up to 6 matter blocks in his memory, so you have to make a choice on how you want to proceed forward as often you need certain types to open switches or certain amounts to get through. This makes every decision crucial. This is a puzzle game and making one wrong move might mess up your game. Luckily you can step back and make corrections on wrong moves. Didn’t send the right block out? No problem, step back, and it never happened. 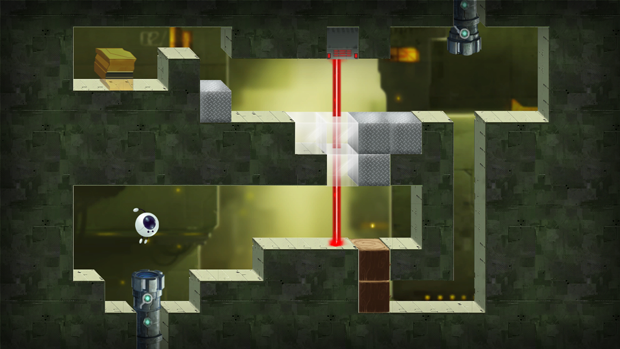 As you navigate the levels, there are 3 hidden memory blocks which you should collect to help restore the Tetrobot’s memories. They are often not easy to get and in the later half of the game, block management becomes a huge part of the equation. When you collect all 15, the Tetrobot is restored. Each Tetrobot has 5 levels with 3 memory blocks each and one key level, which are used to unlock the boss encounters.

The boss encounters were actually a nice surprise, especially for a puzzle game. You enter the room with a big slime, and you need to navigate the rooms finding ways to the slime three times with matter or yourself. They do a great job of using the fundamentals of each environment blending everything you have learned from the game and applying it together.

The game also has a great sense of humor about thing – it never takes itself too seriously. For instance, each different type of matter block has a Faceblok page you can unlock. Also, the levels have some really great names such as Twisted Transistor, and the first portal level was named Test Chamber. You also get a write up on each of the cute Tetrobots when you restore them completely. 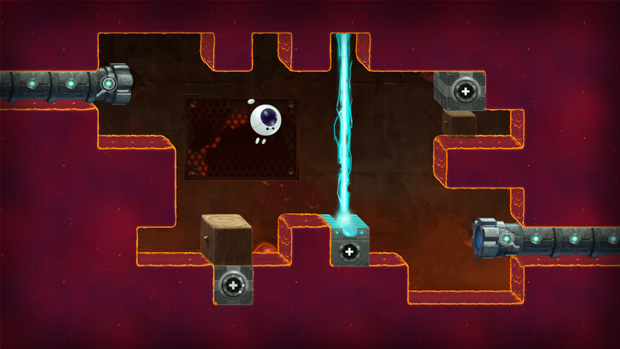 The game has 15 trophies with one Gold and Silver while the rest are Bronze. If you 100% the game you should be able to unlock all of the trophies as they are all completion-based. I did have trouble with the trophy for beating the final boss popping, but other than that it is a good trophy list. I would have liked to see a few more challenge-based ones for some extra difficulty, but overall this is good.

I really liked Tetrobot & Co. as it presented me with the challenge that like about a good puzzle game – it started off simple, but quickly ramped up difficulty giving you that “What do I do moment?” we’ve experienced many times. Its puzzles are smart and well thought out and can take some time to figure out, so I appreciate there is no time limit or timer in general, letting you take your time to think about each scenario. If you enjoy puzzle games, this is a fun one that should give you plenty of hours of enjoyment.


This review is based on a copy of Tetrobot & Co. provided by Neko Entertainment.