Get sucked into the world of some of your favorite movie genres and fix the tapes so you can return them to the rental store. Isn’t that an epic story for a video game? Then come right in to read about REPLAY: VHS is not dead!


REPLAY: VHS IS NOT DEAD is a platform game in which you control time in a brand new way. Control up to 5 different characters and synchronize their actions to complete each level.
Take on the role of film director and travel through several humorous movies in REPLAY: VHS IS NOT DEAD!
Each level is full of surprises and will have you racking your brains. Are you ready? Then… Silence on the set… Camera… Action!
Accessible gameplay:
In REPLAY: VHS IS NOT DEAD, you cannot lose. Don’t like a scene? Cut! Take two!
Game duration:
Over 70 levels in 4 different film universes, medals, costumes, hidden keys…
Retro look:
80s-style artwork and a soundtrack worthy of the great Hollywood classics.

REPLAY: VHS is not dead is an interesting new puzzle/platformer from Neko Entertainment. The story of the game is very simple: you rent a bunch of VHS movies and, on the way home to view them, you are struck by lighting. When you get home, you find out the videos have been erased and that you can jump into the films to help fix them. It actually kind of reminds me of the older film “Be Kind Rewind”, without the jumping into the TV part.

Replay – VHS is not dead (Trailer)

At its heart, the game is a puzzle game. Upon jumping into the game, you find yourself at a Hub World based on the theme of the level. You start the level with multiple characters on the screen, and you have to get them to their finish spots, which are clearly marked on each level.

This is where the game’s challenge comes into play. You control each character independently and have to separately guide them to where they need to be. Once you move one character, you then rewind and control the other character. However, there is a catch: you will almost always need to cooperatively control the multiple characters to navigate through the level. It means you need to rewind multiple times as you need to work both characters through the level, and each time you rewind and pick the character you have to restart everything you already did again and repeat it to then moev that extra step. You will have many obstacles to navigate including lasers, switches, spikes, pits, and more, not to mention the game’s bosses. Remember when I said this could get hard to manage? 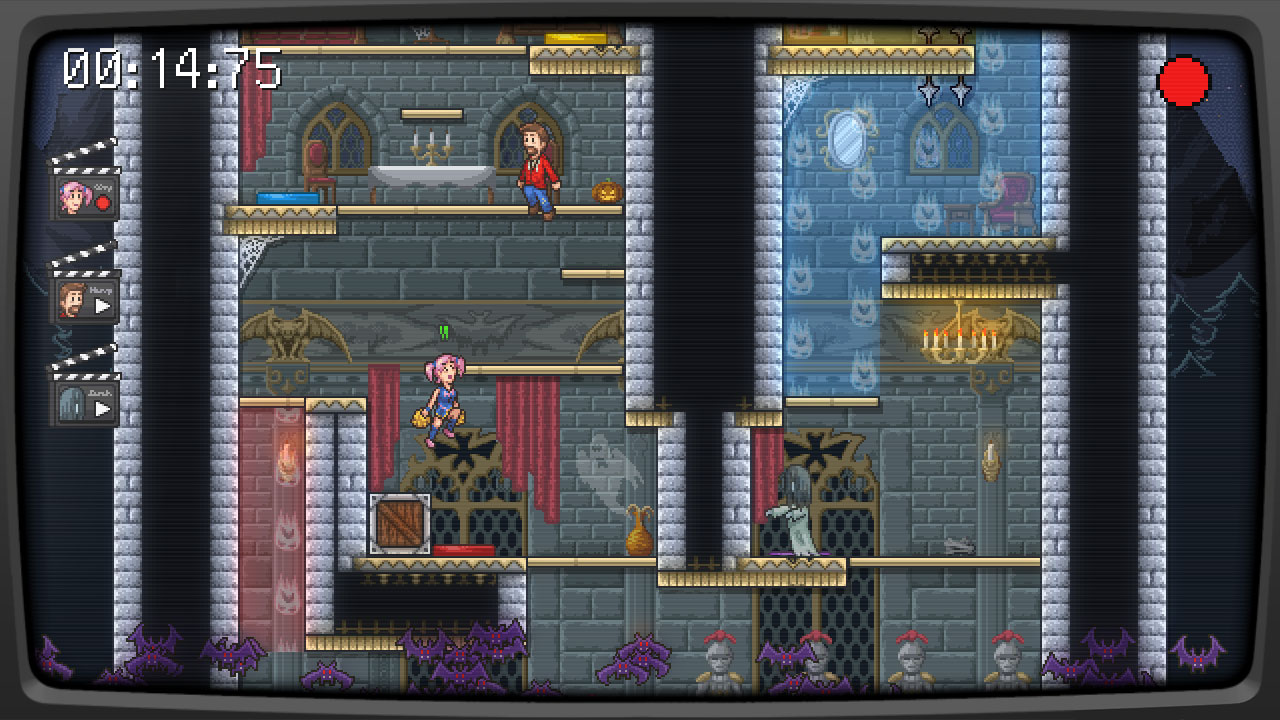 Well, it’s very tough, especially once you start navigating more than two character. Unfortunately, there is no way to just start at the last point you left the character so every time you jump back and forth you have to remember the exact pattern and timing you took before or it won’t sync with the other characters on the screen and could keep them from hitting their targets. It’s a unique idea, and once you start to get the hang of things it works pretty well, but there are times where you lose track of what the other characters path should be or the exact timing required and you have to start from scratch again.

Once you complete the level, you are awarded a gold, silver, or bronze medal depending on your time to complete it, and each level has a key that you can find to unlock some secrets in the hub world. I actually found that even on the early levels getting that gold medal was very difficult, so you should have a good challenge with this game if you aim to get 100. 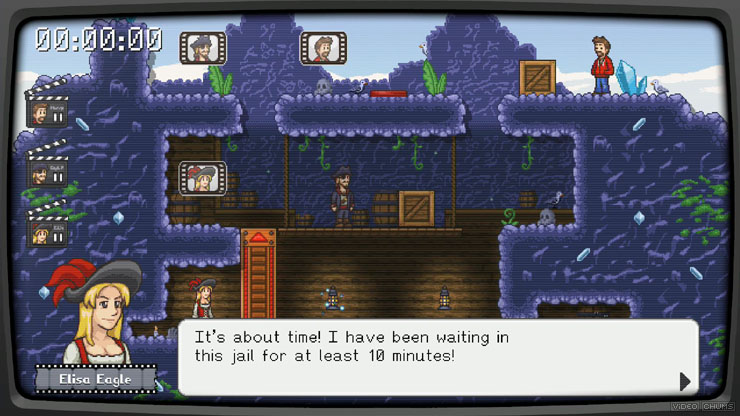 The look of the game is very unique giving it an older 90’s theme, especially with the chosen movie franchises. Overall they are very fun as the game has pirate, space, horror and adventure themed levels. The characters you meet are fun and the dialog they have has been funnily written. I really like everything about how the game looks and plays. Heck even when you pause the game it looks like a VHS tape with the old tracking lines and terrible fonts – great presentation overall. The one area I would change are the hub worlds as you have to navigate around to get to the level you want to play – it would have been nice to include a quick list of levels to make it easy to jump into different levels and saved a little time.

The game has 14 trophies: 1 Gold, 2 Silver and the rest are Bronze. You will get most for playing your way through the game, but some are for collecting all of the keys and getting Gold Medals on all levels which will be quite a challenge. Good Luck with that!

I really wanted to like this game a lot due to its awesome presentation and cool mechanics, but I found myself getting frustrated here and there due to how the rewind mechanic works – making one small wrong move with a character and needing to start from scratch again. I still had fun with the game and would definitely recommend you give it a try due to its uniqueness. If you like games that offer a challenge, then you’re going to love this one.


This review is based on a copy of REPLAY: VHS is not dead provided by Neko Entertainment. 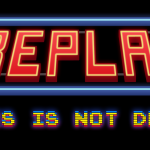 REPLAY: VHS is not dead Review

Do You Want to Become a Writer For PS4Blog.net / PS3Blog.net?