Are you the type of guy who can perfectly pretend to be human, even when you’re not? Then come join us on Valentine’s Day for a look back at a very fun PlayStation 4 game that you should definitely check out!


Octodad: Dadliest Catch in premise sounds totally weird. It’s a game where you play as an Octopus pretending to be a human dad with a wife and kids. The silliest part is that almost no one realizes this except for a Chef with a vendetta on the Octopus. It’s an insane universe where everyone kind of doesn’t get it.

In this game, the focus is on just being human and doing normal human things, so you are not found out to be a fraud. You will do chores around the house, go to the supermarket, even do family visit at the Aquarium. Sounds really easy, right? I mean you, the player, are a human, so how hard can it be? Well, it can get quite difficult at times due to the way the Octopus controls. Read the whole review for the controls, but let’s just say that it’s a very weird (but fun) way to control your character.

After launch, they actually supported the game with two free episodes of content giving even more for players to accomplish. It’s nice to see indie studios continuing support for their titles after launch. Doesn’t hurt the new episodes were fun and challenging. 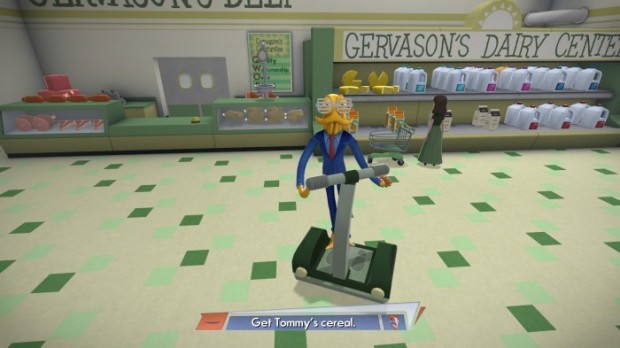 I always felt this was one of those games everyone with a PS4 should try. I still don’t think it’s everyone’s cup of tea, but it’s unique and special enough to make for a cool showcase for the system and the special type of games it can deliver. Play this game and do your at pretending to be human!