Did you play the fantastic Rainbow Moon on the PS3? How about the PS Vita version? Do you love it enough to play it again on your PS4 in a new release that makes this the definitive version of Rainbow Moon? Well, if you answered yes, then you’ll be happy to hear that those who own the previous versions can get Rainbow Moon on PS4 at a 50% discount. Read our review to see why this is the best version of this awesome RPG!


Rainbow Moon is an isometric fantasy RPG where you take control of Baldren, a traveller that was warped to a place called Rainbow Moon by Namoris, his nemesis. When he warped, he brought with him a horde of enemies that basically turned Rainbow Moon into a chaotic hell. At the start Baldren’s goal was simple: find a way to return home. However as you play and progress in this rich and deep fantasy RPG, you will quickly find that getting home is not quite as easy as it seems.

The battle system in Rainbow Moon starts off pretty simple but once you hit level 4 you unlock your first sub turn, and that’s when combat starts to become more challenging and open as you grind for levels and unlock more sub turns, making each battle more strategic. You will also find magic scrolls you can use to learn new skills to mix up your range between magic and melee attacks. Said scrolls will be located by exploring the game world, found inside treasure chests, or you can buy them in shops or even obtain them as quest rewards. The skills you learn also level up as you do, so the more you use a skill, the more powerful it will become! There are a lot of skills to find and learn, and that is part of what makes Rainbow Moon very fun. 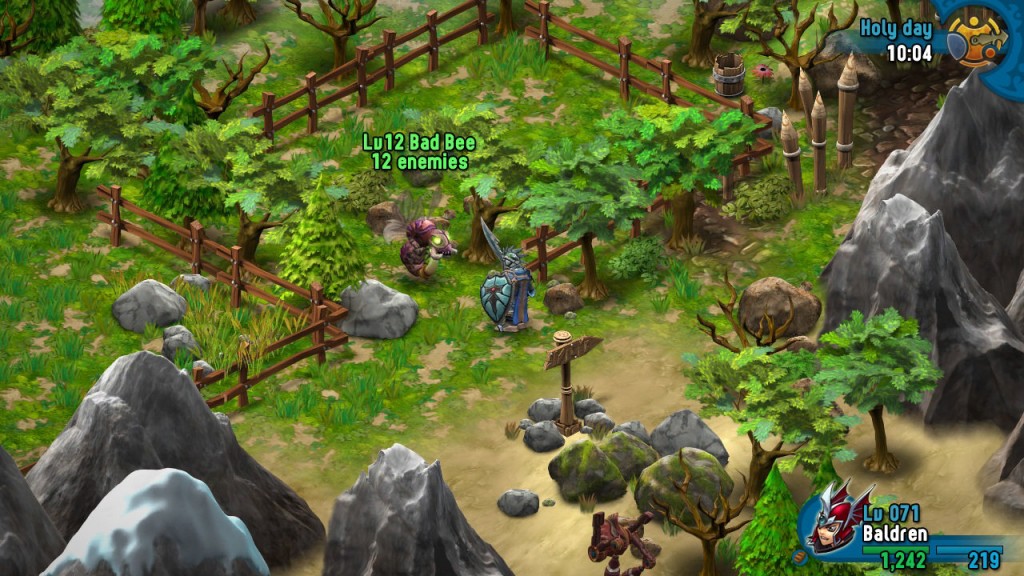 Baldren will start out pretty empty depending on which difficulty you choose. On easy, you will be well supplied and have a decent start out kit. On normal difficulty, you get just basic stuff. And on hard difficulty, you get absolutely nothing. Right from the start, your main focus should be to obtain some decent items and secure a lot of gold because you’ll need to invest in new gear as you go or else monsters and enemies will get the best of you in battle.


Baldren will find some companions during his journey home. None of them are missable and you will have the option to make them party members. You will meet Trisha who is an excellent archer – she will acquire brilliant abilities that will make her a valued part of the group. Shortly after meeting Trisha you will find Dozeru, a great tank once he levels up a bit and gains a few decent skills – you may not like him at first, but give him a chance, and he’s great in boss battles. Next you will meet Gorodo. He has pretty rubbish defense but he more than makes up for it with high HP and powerful attacks. He can be pretty great once you level him up a bit and invest in his defense stats. Then you meet Serena, who is mainly a magic user – she will learn some brilliant skills that will help you greatly. 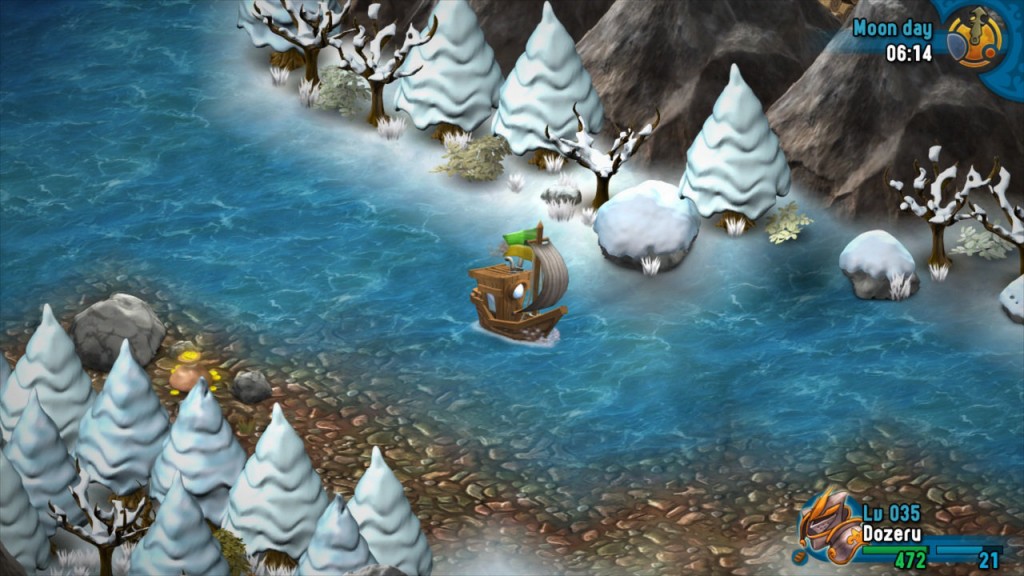 Since Rainbow Moon is a traditional turn-based release, for each move or turn you take the enemy makes theirs, and you can see the turn order on the top left of the screen. The game can be slow to start. and you will need to plow in at least 10-15 hours for the story to start fleshing out and your party to beef up decently.

Another element to consider is that you’ll need to keep an eye on your party members hunger level, so there will be times you will need to stop by campfires to feed your crew and get a good night’s sleep, It is an interesting mechanic to have, but worry not because you can find plenty of food out in the open and during battles and in shops, so stocking up is not an issue. 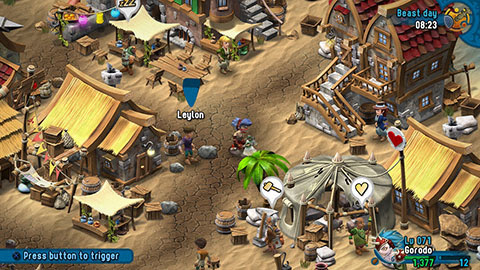 Rainbow Moon has plenty of optional stuff to sink your teeth in, and one of the more fun things is the lottery, known as the Wheel of Luck. You will unlock the first one at Tafer, and there are five levels of the lottery – you must be at least level 35 to unlock the first one, and you need to be of certain levels to unlock the next four levels. Word of warning, though: they are highly random, and you will probably spend a lot to get the particular items you want. The Lottery is arranged into alphabetical categories with C being the weakest and S being the best. On top of the lottery, you have 100 Rainbow Moon medals to find thanks to an optional sidequest that I’ve had a lot of fun with. If you give the quest giver a set number of medals he will reward you with something good, so search everywhere!

The game has a good crafting system, and I recommended that you never sell anything in your inventory unless the description says it can be sold at a high price. Bear in mind some of the items you find during your journey can also be used as part of a quest, so if you run out of inventory space look at your side quest log and see if you can get rid of some items, and make use of the crafting. Crafting can be a good source of income. 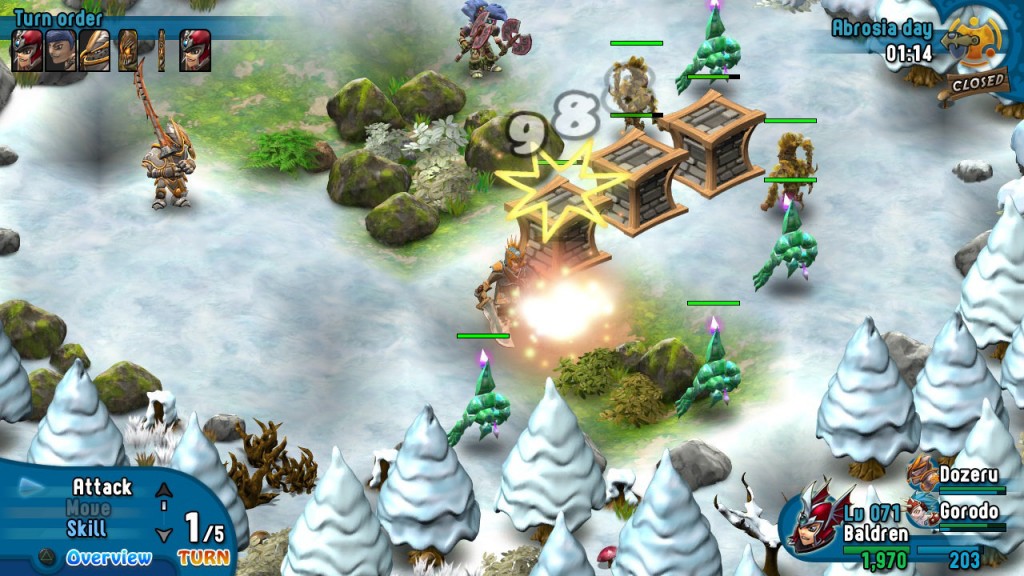 Rainbow Moon will get many hours of your life with its huge amount of content. Just to get that shiny Platinum trophy you must level up to 500 and that is no easy task! It’s a good thing the main story quest line is jam packed with fun activities, not to mention how the optional stuff will keep you hooked in the long run as well. The jump to PlayStation 4 has made this one shine, and the graphics look great and everything is very detailed and colorful. It’s an overall smoother experience on PS4, with 60 fps, 1080p and almost no loading! If you started Rainbow Moon on PS3 or Vita and wanted to continue playing on PS4, you can import your save file and continue right where you left, and that is an awesome feature! 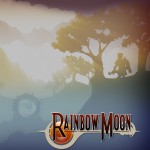