NITROPLUS BLASTERZ –HEROINES INFINITE DUEL is a new release from Examu, who have previously worked on the long-running Arcana Heart fighting series as well as on Aquapazza. As you can probably imagine, this is a fighting game that we’re getting a chance to play thanks to the efforts of Marvelous USA and XSEED Games, and it features a crossover of several heroines from visual novels and game releases from Nitroplus (hence the name of the game), as well as from manga and anime where members of Nitroplus have had a hand.


Before we go any furter, I did want to mention that this fast-paced fighing fighter is also available on PlayStation 3 (a version that The Nmac has already reviewed over at PS3blog.net), in case you favor Sony’s previous console over the PlayStation 4. 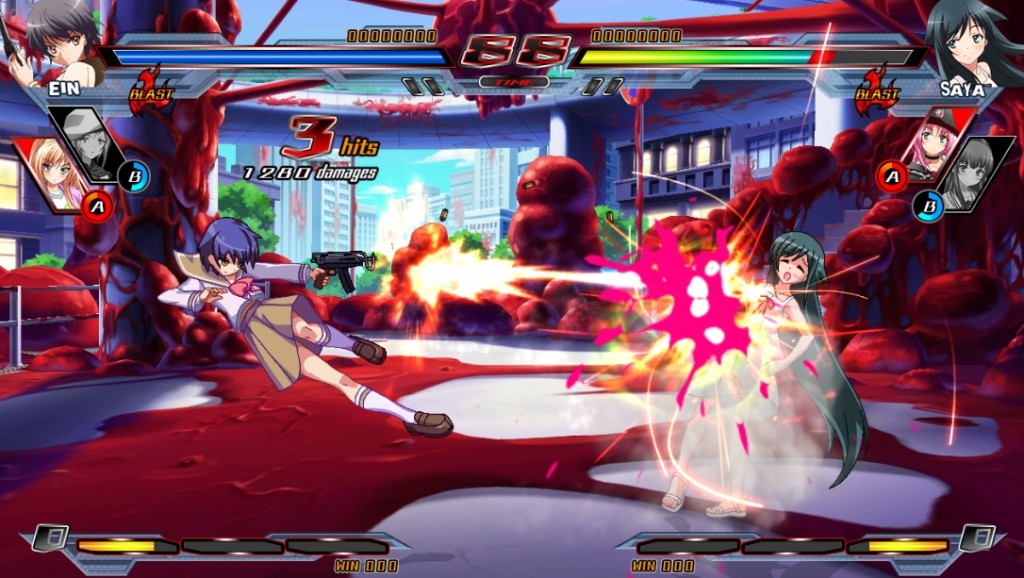 NITROPLUS BLASTERZ –HEROINES INFINITE DUEL features several modes for your entertainment, providing something for every type of fighting fan. Story Mode is where you’ll be fighting against the game’s AI as you enjoy the story for each character. Another Story Mode is sort of a sequel for Story Mode and it features additional events and story sections that follow what happened after the end of Story Mode, but it leans into visual novel territory heavily, which is a good thing for me since I love visual novels! If you’re a bit confused thinking “a visual novel in a fighting game?” just remember that Persona 4 Arena (and its sequel) are real. You also have the mandatory Versus mode where you can fight against the AI or another human being, a Score Attack mode where you aim at obtaining the highest score possible, a Training Mode to practice with each character’s attacks and special skills, and a Network Mode where you can connect online to battle against other players around the world (I want to remind you that in order to participate in online matches you’ll need to have an active PlayStation Plus subscription). 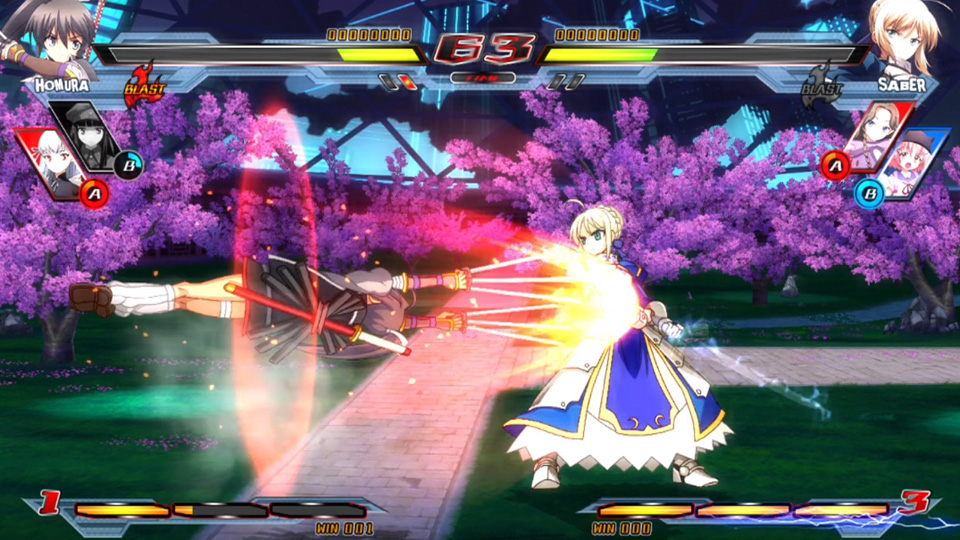 This being a fighter, you have access to the usual actions you’d expect in a 21st century fighting release such as being able to dash, do a high jump, perform air attacks, throws, recover after a hit, perform a counter, activate special skills and super moves, and even evade attacks in the ground or in the air by activating a special guard skill. On top of this, you also have access to two partners during a match (selected as Partner A and Partner B), each one with her own partner gauge you can deplete by activating a Partner Blitz – that is, allowing a partner to help and attack during a match. Each partner’s gauge fills up separately, and you must be aware that the gauge for each of the many available partners fills up differently, so you better prepare and be aware of how long this takes so that you’re not caught off guard by thinking you’ll soon have access to a partner when in fact her gauge might not be full until the next round.


As for the playable character’s in NITROPLUS BLASTERZ –HEROINES INFINITE DUEL, they include Ein (from Phantom of Inferno), Mora (from Vampirdzhija Vjedogonia), Ruili (from Kikokugai The Cyber Slayer), Al Azif (from Demonbane), Saya (from Saya no Uta), Ignis (from Jingai Makyō), Anna (from GEkkō no Carnevale), Muramasa the third (from Full Metal Daemon: Muramasa), Ethica Kibanohara (from Tokyo NECRO), Saber( from Fate/Zero), Ouka (from OKSTYLE) and Super Sonico (from Super Sonico). Along with them you have Homura (from Senran Kagura) and Aino Heart (from Arcana Heart) who are available as DLC. 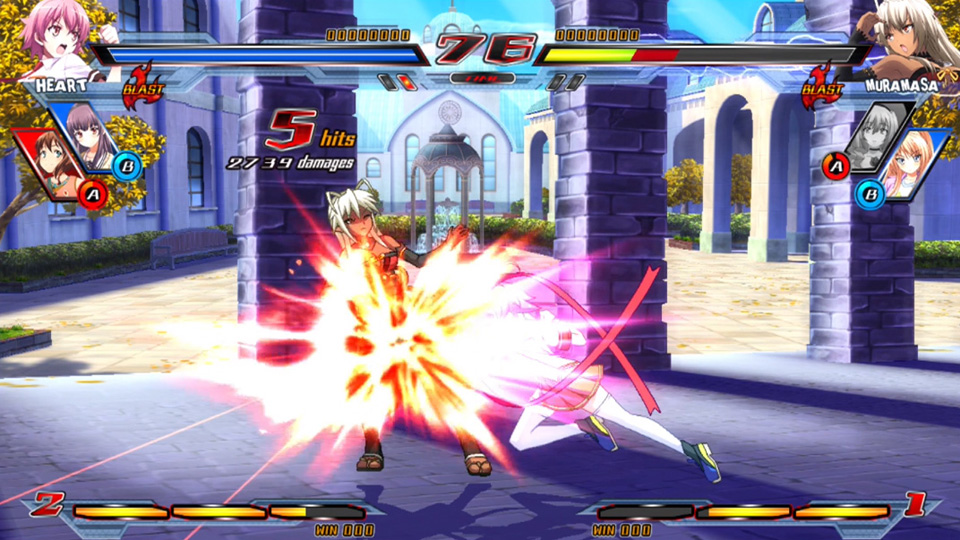 Along with the fighters above, there’s several characters to select from as your partners: Akane Tsunemori (from Psycho-Pass), Alushia (from Hakubō no Dendōshi), Amy (from Gargantia on the Verdurous Planet), Angela Balzac (from Expelled from Paradise), Another Blood (from Kishin Hishō Demonbane), Anri (from Tenshi no Nichō Kenjū -Angelos Armas-), Aoi Mukō (from Kimi to Kanojo to Kanojo no Koi), Carol (from Guilty Crown: Lost Christmas), Dragon (from Dra†KoI), Ishima Kaigen (from Hanachirasu), Kuro no Franco/Franco il Nero (fromZoku Satsuriku no Jango -Jikogu no Shōkin Kubi-), Miyuki Sone (from Kimi to Kanojo to Kanojo no Koi), Mugen Yoguruma (from D.Y.N. Freaks), Natsumi Aibara (from Hello, world), Sakura (from Axanael), Spica (from Sumaga), Super Sonico (yes, she’s also available as a partner!), Yoishi Mitsurugi (from Phenomeno) and Yuki Takeya (from School-Live!). That’s a lot of potential partners to aid you on your journey! 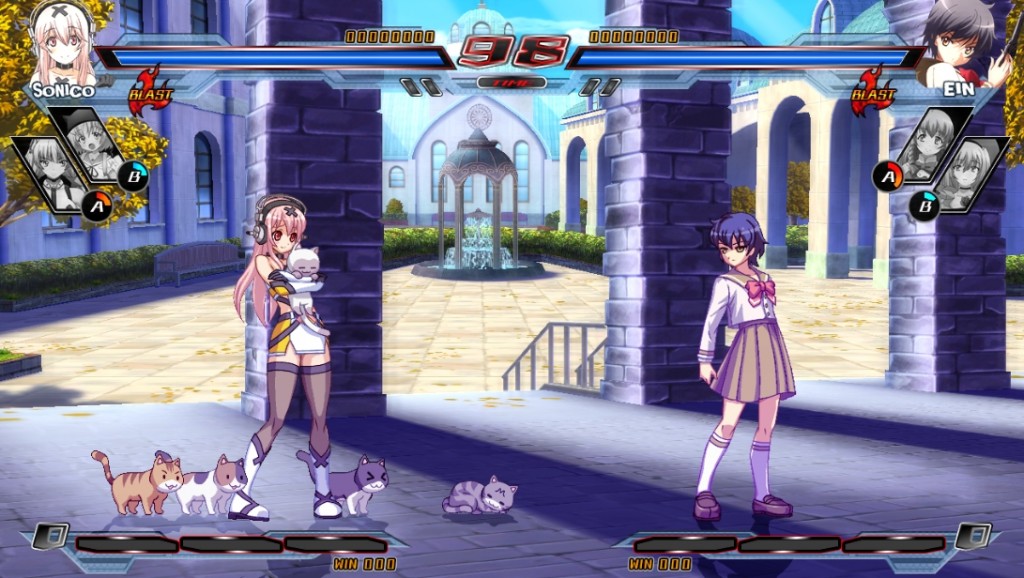 During each fight you can Blast by pressing the three attack buttons at the same time, and this will power-up your character and her attacks. Partners can be activated by pressing two buttons (the combination depends on if you want to activate Partner A or if you want to activate Partner B), and luckily these button combos are mapped to the L1 and L2 triggers on the DualShock 4 to make it easier for everyone to trigger a Partner attack right in the middle of a combo. Speaking of combos, some characters are more combo-happy than others, being able to chain weaker-but-faster-paced attacks one after the other, while some characters are a bit more of the tank variety, being a bit slower with their attacks and special skills, but packing a stronger punch with every hit they land. 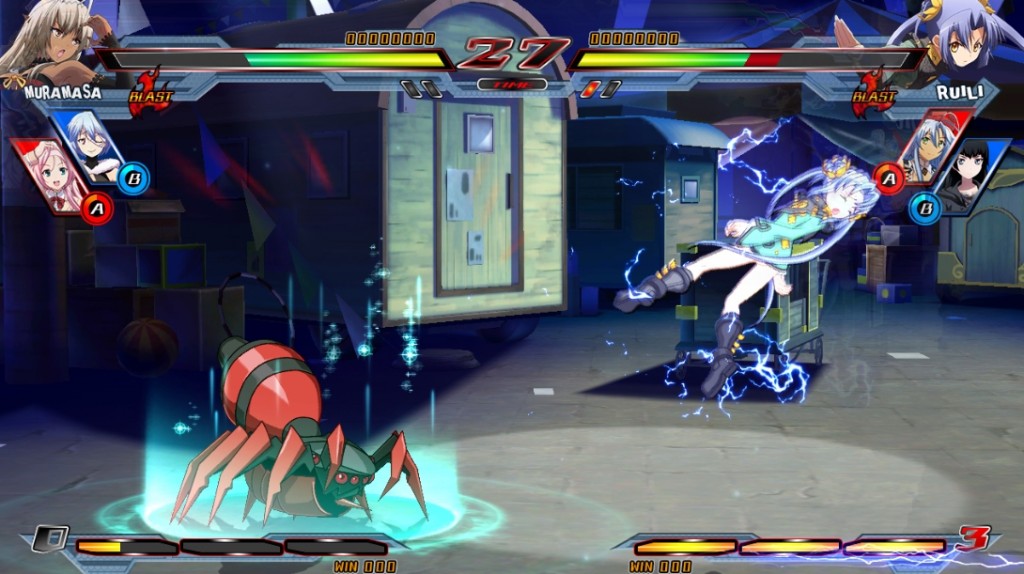 Trophy hunters will be happy to read that most of the trophies in Nitroplus Blasterz: Heroines Infinite Duel are unlocked naturally as you play the game. This is a diverse list that includes trophies for completing story mode (as well as for completing specific stage levels as you progress to that overall goal), hitting an enemy while on she’s on the ground, using your Blast to offset an attack, defeating enemies with a heroine’s Lethal Blaze skill, activating a Partner Blitz, countering, and more. Overall, it is a very balanced trophy list where the Platinum is achievable AND fun to get, and that is always a plus in my book. 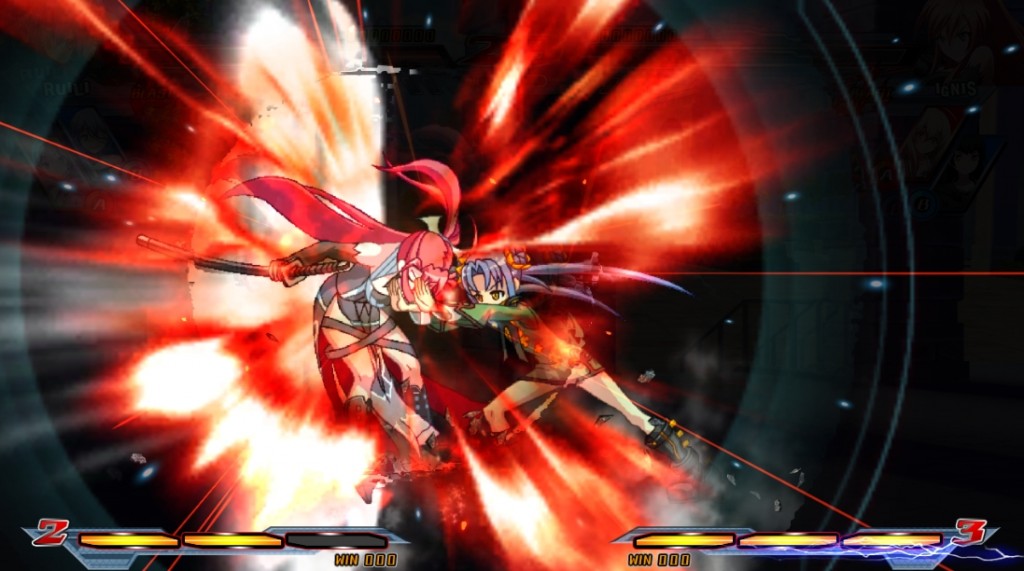 I love fighting games, and I definitely had a lot of fun with NITROPLUS BLASTERZ –HEROINES INFINITE DUEL. The fights are very fast and you’re always on the move, making this a very dynamic fighter. The visual novel side of the package was also great (greatly reminding me of Persona 4 Arena’s take on this) so I can definitely recommend this one to you. 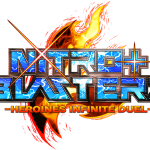