Ready for a deep dig (pun inteded) into the PS4 library? Then get your shovel ready and make sure you have enough water to power your steam-powered engine throughout this review revisited.


Steamworld Dig came out early in the PS4’s life cycle, when new PS4 games were slower to come by. It had already been on several platforms – including 3DS and Wii U – where it had garnered some critical acclaim. I was definitely looking forward to getting my hands on it.

You star as Rusty and because your uncle died you inherit his mine. You then get to work on digging up the mine. What’s really cool with the game is the risk and reward payoffs – will you dig a bit deeper for the change of securing some extra resources. You need water to power your characters steam engine so that you can keep going deeper into the mine, but you can only carry so much treasure and water at once, so at some point you need to make a trip back to the top to drop it off. The game play really pushes how far you go before heading back up to the top of the mine.

Mix that up with some great Metroid-vaina (a very popular choice nowadays) search for power-ups, health, treasure, and water upgrades and you have yourself an awesome title. I haven’t even mentioned that as you go down it gets more mysterious and there might be something more to the cave then what’s you thought was initally going on. 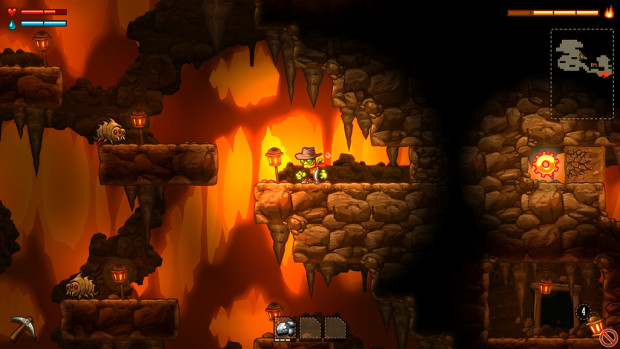 Out On February – Lovers In a Dangerous Spacetime