Harmonix set up a crowdfunding campaign over on Kickstarter asking for $775,000 in May 2014 to make a new Amplitude for PlayStation 4. I’ll be the first to admit I thought the probability of success was slim to none – but in true Kickstarter fashion, I was greatly surprised that Amplitude surpassed its base goal and then some. No stretch goals were met as the main goal was only achieved with just 20 or so hours to spare.

Amplitude is a new take on the PS2 classic, with a full campaign mode featuring 15 songs that complete a “concept album” that tells a story with it’s lyrics and rhythms. Some big names in the gaming industry backed very high just to get one of their songs in the game! Insomniac Games (Ratchet and Clank) celebrated their 20th anniversary and included their anniversary song Crazy Ride (a song you’ll have to unlock to play it, along with several other songs!).

The main campaign features the story of a comatose patient called Sarah who you are trying to heal as you play songs with your Nanoblaster and work your way through the patient’s neural pathways. As you complete songs, you will be presented with a CAT scan of her brain to see how far along you are within her brain. The music in the campaign kind of represents what Sarah is thinking or feeling during her current situation. As you play tracks, you are not just playing music you are playing to repair Sarah’s brain, and each node in the track represents a damaged cell that you need to heal. The more nodes you heal, the more points you get and keeping a streak going earns you bigger score points thanks to a score multiplier. If you miss a node and lose your streak the nodes kind of burn away and become irreparable in Sarah’s brain, so the more nodes you hit, the greater the chance of Sarah’s recovery. 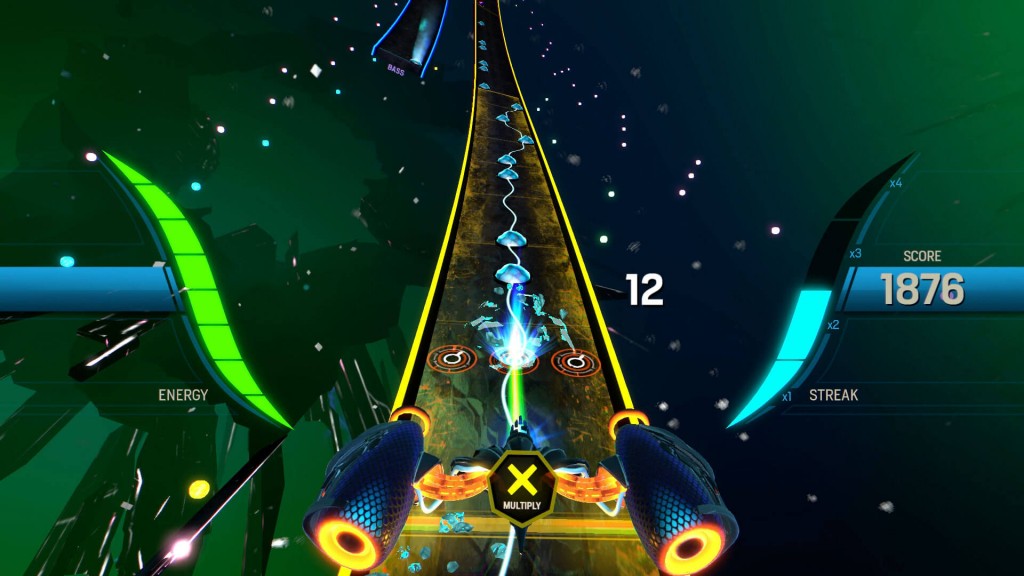 The track layout of Amplitude plays very similar to Guitar Hero games, except without the expensive plastic instruments. Instead, you can use the L1, RI and R2 triggers or the Square, Triangle and Circle face buttons to target each of the three nodes in a track, although the control scheme is fully customizable you can choose the best control scheme to suit your playing style there are about five or six options at your disposal. I recommend experimenting with the different controls schemes in training mode to see what works best for you. I found the default control scheme didn’t work well for me, so I was happy to see this option.

Amplitude has several difficulty levels to choose from, which makes it easier for you to find the perfect difficulty to enjoy the game. The higher the difficulty, the faster the nodes move and the more nodes you have to heal per track, so you’ll need to have pretty quick reflexes to achieve 100% on all songs! You can also choose your blaster between the four available options, from Raven (orange), Chubs (blue), Boxy (yellow) and Shogun (purple). 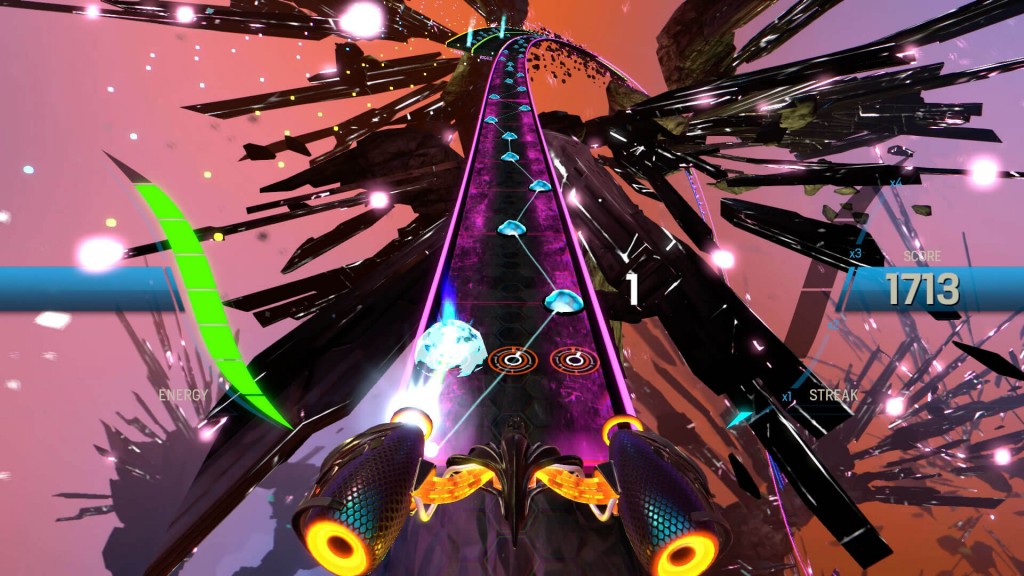 Each lane represents different instruments, with pink lanes pushing the drums, blue lanes are your bass, green lanes are your vocals, and the yellow lines are your synth. Each sequence you successfully complete blows up the lane so that you can move to the next part of the track. On the left side of the screen is your energy meter, and it works kind of like your health bar. If you miss nodes/sequences, you can very quickly run it down, but clearing sequences can refill your meter quickly as long as you do not miss any nodes. If you miss too many nodes, then it is game over, and Sarah’s brain won’t recover! 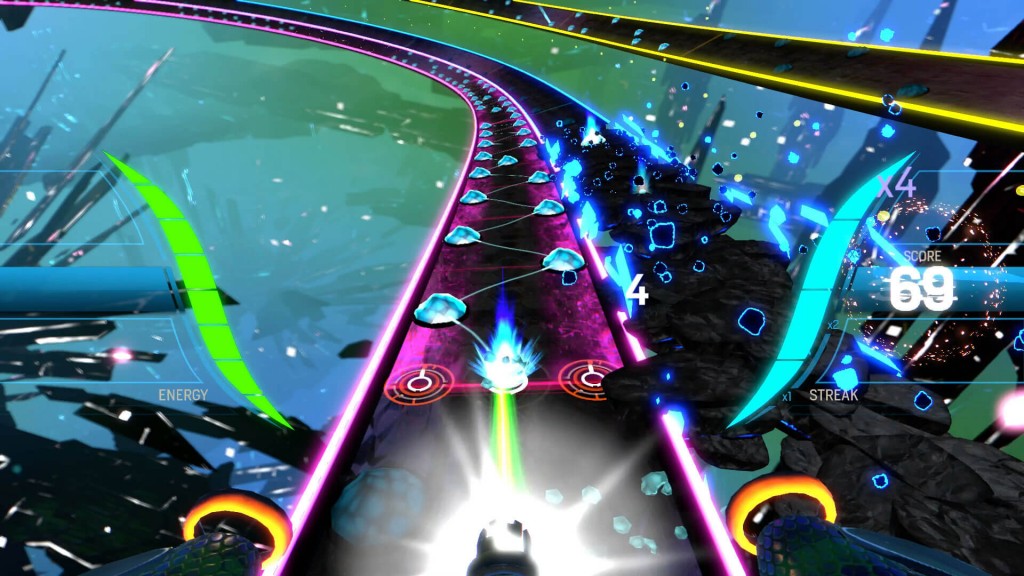 The key to beating the songs is timing and listening to the beat, because you blast away the nodes to the beat of the music, and if you don’t pay attention to each song then you won’t be able to combo your streak up for a better overall score.

There is no true online multiplayer, but there is, however, local co-op with up to 4 players, making this the perfect party game. The online multiplayer stretch goal was never met and therefore not included with the release, but you do have leaderboards so that you can compare your scores with your friends and with everyone else around the world. Are you good enough and fast enough to earn a place in the top spots? 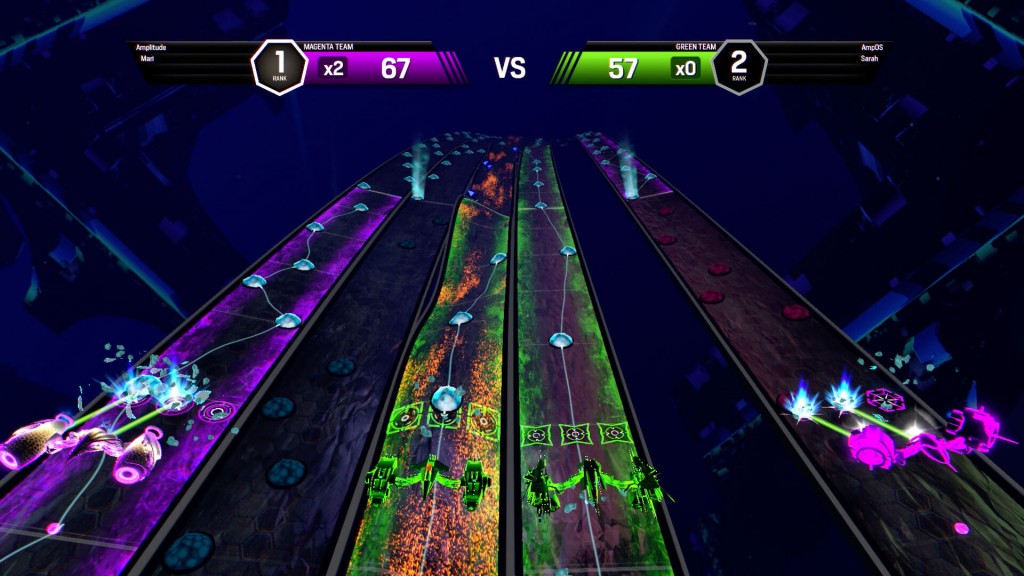 Along with the main campaign mode, you have quick play mode that works very similar to free play. Here you can play all the tracks you have unlocked, which along with the 15 songs from the campaign mode makes for a total of 31 songs (considering the Kickstarter-exclusive song

Overall I have no regrets about backing Amplitude. I have had a brilliant set of days playing the game for a while, and your mileage will vary depending your skills and reflexes. The graphics are quite psychedelic, and I enjoyed most of the songs. Harmonix is very good at rhythm games, so I look forward to checking out what they have in mind for their next crowdfunded project that will be run over at Fig. 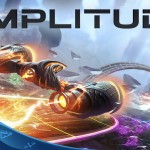 Out Next Week – Fenix Furia On PlayStation 4