Ready to stop the First Order? Or do you want to take a shot at conquering the galaxy? Well, then you’re in for a treat because Zen Pinball 2 once again has you covered!


Based on Star Wars™: The Force Awakens™, players will be able to experience unforgettable moments from the film on two action-packed pinball tables.

Team up with the Resistance to fight against the First Order alongside Rey, Finn, Poe, General Leia and Han Solo in the Star Wars™ Pinball: The Force Awakens™ Table!

This set of tables comes in two different flavors – one for the Good Guys and one for the Evil Ones. I’ll talk about both of them separately. I hope this still isn’t an issue, but there could be some very MINOR Force Awakens Spoilers in the following review. So take heed.

The Force Awakens table stars the heroes of the new film. It is set on the planet of Jakku, the new planet introduced in the most recent Star Wars film. The one thing I noticed about this table right from the onset was how empty it felt. I’ve played quite a few tables from the Zen Pinball library and usually there are multiple characters on the table. However, this one started empty. Just like the desert setting, it gave you a very solitary feeling. All of this changed very quickly, though – soon characters were jumping all over the screen, the backgrounds were changing wildly as I visited different locales in the Force Awakens setting.

The table has Rey, Finn, BB-9, and even the evil Kylo Ren all ready to jump into action when needed. The game does a great job of putting some of the bigger plot points on the table, really supplementing the movie feeling. There is a lot to enjoy for people who have watched the movie. Two of the big parts I thought were really cool was when the Millennium Falcon was trying to out-fly some Tie Fighters above the table and you are still taking your shots. I also liked when the Rathtars (the creatures Han Solo was transporting) were loose on the board, and you had to attack them.

Lots of great stuff to like on this table. The final thing I appreciated was the immersion in the table. Normally the Zen Pinball 2 tables still resemble, well, a pinball table, and it’s in an area usually related to the main subject or theme. But this one takes things further with the desert landscape where you can see all of the old and dead ships in the background as the game takes you into the Star Wars. I would love to see Zen Pinball take this further on future licensed tables because it adds to the overall experience.

Star Wars™ Pinball: Might of the First Order Table Trailer

This second table focueses on the First Order, the big bad guys of the current Star Wars universe. It is mostly focused on Storm Troopers, but you will see Resistance forces trying to stop them every now and then. Captain Phasma, the underused character from Force Awakens, is put to good used here.

The entire table gives off a strong vibe of the Starkiller base, which was obviously the aesthetic they were going for. The place is littered with different types of Storm Troopers, all with that filtered voice we got in the movies, adding to the authenticity of the table.

This one has several cool moments, including the Star Destroyers holographically fending off the resistance, as well as battles in the base with the resistance itself. It does feature a Storm Trooper with a flame thrower, which is cool, but at first I thought it was TR-8R, but it turned out to be just an ordinary trooper.

One of the problem for me on this table was the mini table underneath the main table. It’s always in view, so while you are playing you really need to pay attention to which flippers you need to control. There were several moments I thought I was flipping them at the right time, but I was focusing on the wrong set of flippers. I actually did like the mini-table, but wished that when it was not in use, it was out of view or tinted out to avoid any confusion. Definitely not a deal breaker but something for you to consider.

I say this every time, but Zen Studios have really outdone themselves again. Somehow they continue to manage to make innovative tables and show lots of growth in their design choices. These tables use the Force Awakens license so well and make great use of the characters from the movie, which any fan of the latest Star Wars movie, and of the Star Wars universe in general, should be trying these out. I’m very much looking forward to the next tables from Zen Studios!


This review is based on a copy of the Star Wars™ Pinball: The Force Awakens™ Pack provided by Zen Studios. 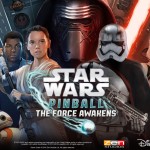