Imagine this if you will: Angry Birds and Peggle are in a bar getting drunk and talking about Baseball. The conversation starts to get a little more interesting, so they decide to get a room to talk some more. Nine months later, Baseball Riot is born.

10tons brings the sequel to its 2013 release “Tennis in the Face” and if you’ve played that game then you know everything there is to know about Baseball Riot. My review is based on a PS4/Vita playthrough.

Baseball Riot is a fun physics based puzzle game packed with slapstick comedy and mayhem! Take control of retired star batter Gabe Carpaccio as he goes on a crusade to free his former team from the grasp of Explodz Inc.


If you are trying to figure out the difference between this game and Tennis in the Face, the only notable difference is this time instead of Pete Pagassi you play as Gabe Carpaccio. One is a Baseball player and the other was a Tennis player (but not in that order), but their animations are exactly the same and so is the gameplay.

But if you have never played Tennis is the Face and like physics-based puzzle games then this one might be worthy of your attention. The game is simple enough to understand without any effort.

As a Tenn– I mean Baseball player, you are given a set number of balls to strike down all the enemies that appear on screen. Knock 3 or more with one ball you will receive an additional ball as a bonus. Each level is unique with its layout of enemies, structures and obstacles, making each encounter a new brain teaser to solve. Yes, you have your enemies on screen to take out, and you also have to collect stars. Collecting enough stars allows you to unlock a new region and a new series of levels to play.

As you progress through the game, new enemies are introduced that require you to do new things to defeat them. For example, the Umpire is best attacked from behind because you’ll have a hard time damaging him from the front. I really liked the idea of theming some of the enemies to the game of Baseball, hence the name of this release! 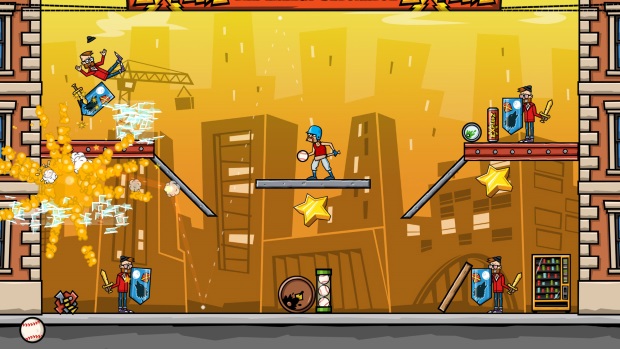 It’s a simple enough premise that probably didn’t require a lot of thought when being put together but credit where it is due: unlike a lot of games that start life on iOS, Baseball Riot is a neatly put together affair. It’s as bright and colourful as you would expect from a game of that ilk.

The game physics used here are fairly consistent and allows for the most intricate of trick shot – the best part of all of this is when a shot either goes to perfection or goes a touch better than expected, knocking down an extra enemy for good measure.

Another thing I want to mention is the soundtrack which is one of the better parts of the game. Though short and often repetitive, there are one or two head-nodders hidden in the playlist that will keep you entertained as you play.

Additionally, the game makes no attempts to skimp out on the control methods. Playing on the Vita, you can control the game with either the thumb sticks, the D-Pad or the touchscreen. On PS4, you can use the D-pad, the thumb sticks and the touchpad… yes the touchpad. On paper it works – you slide your finger across the touchpad to aim your reticule then push it in to shoot. Great in theory except sometimes you can accidentally push in touch pad, taking your shot when you don’t necessarily mean to. You do get used to it eventually, but it’s something you should consider.

But it’s not all Hot Dogs and Peanuts.

Though you can control where your shot goes, you don’t control how much power you use in each shot, being able to do so would allow a greater variety of strategy when planning your attacks but alas you only get one power level.

Also, there is no real feedback when it comes to how much power or how much time your ball has before it disappears. Depending on ricochets, obstacles or items on the maps, you can see your ball randomly gain or lose momentum, which is all well and good except when the ball is moving at maximum pace then magically disappears without explanation. It was only after some experimentation that I was able to figure out that each shot has a lifespan of about 8 seconds (give or take a second) before disappearing. 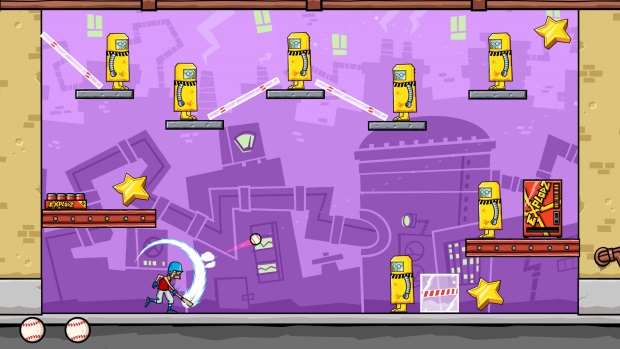 Lastly, I would not recommend this game for a prolonged gaming session- Baseball Riot is more fun when played in 5-10 minute chunks from one puzzle to the next, making it an ideal Vita game. Yes, it looks prettier on the PS4, but the Vita just feels perfect for this game.

In summary I will say Baseball Riot is a solid game for what it aims to achieve and for $5 (£3.99), you could do a lot worst.


This review is based on a digital copy of Baseball Riot provided by 10tons software. 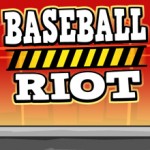 Physics and Destruction-Based Golf is coming to PS4 in May!