Welcome to the first day of school! We’re very happy to have you here. Are you ready to join the mighty Class VII? Well, you better be as your battle skills will be put to the test over and over again. Also, don’t forget about the quiz on Friday!

At the elite Thors Military Academy, Erebonia’s best and brightest learn everything from the art of war to the liberal arts. Rean Schwarzer, a new student, learns that he’s been selected as a member of the newly-minted Class VII, made up of students from both noble and commoner backgrounds.

Class VII has no shortage of issues to overcome, but Rean and his classmates will have to work past their differences and hone their skills, because they’ll need more than just top marks to make the grade – they’ll need to safeguard their country from those who would plunge it into war.

– A World of Lore – Return to the Zemurian continent, setting of the Trails in the Sky titles, with a new adventure for old and new fans alike.
– Tactical Thinking – Execute your strategies in exciting turn-based battles where timing and distance can make the difference between victory and defeat.
– Combat Links – Link any two characters in battle, enabling unique synergies between them.

This is a spoiler-free review.

So this is my first game from “The Legends of Heroes” series. I was very glad when I found out the game was similar to a Final Fantasy with new casts and worlds in each one. This allowed me to enjoy the game on its own terms.

Trails of Cold Steel tells a really interesting story about nine kids from different walks of life having to learn to work together, while overcoming perceived differences in them. Thor’s Military Academy is the place to go to school in Erebonia, all nine have been selected for an experimental new Class VII. It blends the common and affluent people into one class as they are seen as the best of the best. They will partake in many battles, develop new friendships, solve quizzes and complete tasks. Really can’t talk more about this part since I don’t want to spoil too much of the story! 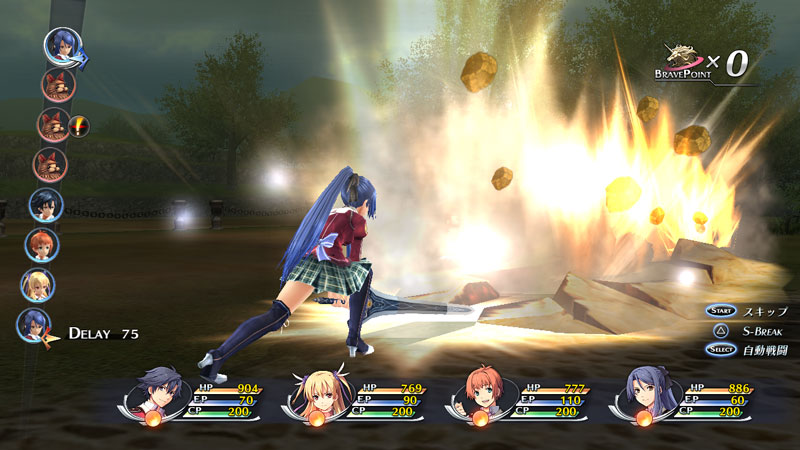 After a few hours of playing the game, I was able to draw comparisons to another one of my favorite franchises… Persona! In The Legend of Heros: Trails of Cold Steel you not only fight monsters, you also runs errands around your school and spend time with your classmates developing your social bonds with them. The game is also on a clock so as you clear the main quest event of each day, the calendar will forward to the next day.

The games battle system is very easy to learn, and while you might have a bit of trouble getting the hang of, at first, it feels very natural after a couple of hours. To get you off on the right foot the game starts much further in the period giving you access to all of your spells, abilities, and weapons. After the initial battles, you then jump back to the first day of school and start from scratch, having to earn all of the abilities you just had the pleasure of sampling.

For the most part, it’s a simple RPG battle system where you can attack, use skills, magic, and special attacks. You need to be in the range of the enemy to attack, and the enemies need to be close to you, so sometimes your goal during your turn is to position yourself closer to your targets. What I really enjoyed though was the combating linking of characters. As you play when you take a hit the other character you are linked with will follow up with a second hit. There are also attack and healing benefits from being linked, making for a really cool system. 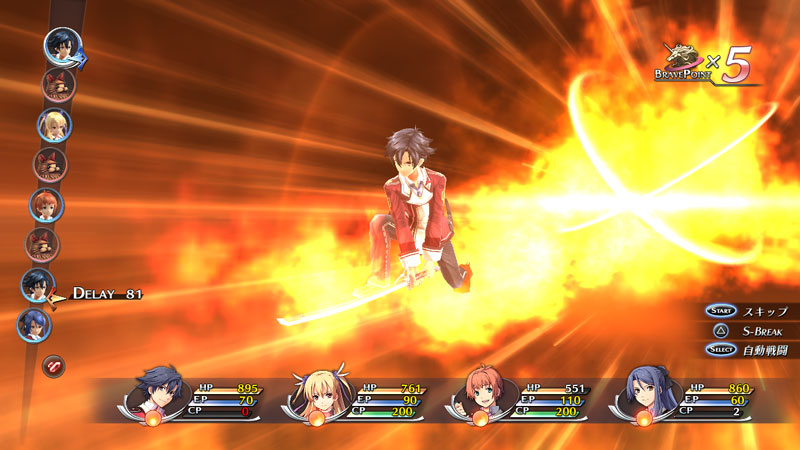 Earning spells and abilities actually comes from finding quartz hidden around the world. They reminded me of Materia from Final Fantasy VII since you need to put them in your ARCUS to get the powers from the quartz. Depending on the combination of quartz you have in your Arcus you’ll gain access to some abilities while locking out others.

The game looks great since it’s a late-generation PS3 game, pushing the system to it’s limits. While the models are 3D, you do get a cellshaded vibe from the game as well, allowing this unique world to look great! The music was catchy, especially while completing tasks at school, reminding me of wandering around Inaba in Persona 4, which is high praise.

Ah, a new Trails game! Earlier last year, I had the pleasure to play Trails in the Sky: Second Chapter (a PSP game that can be played on Vita), so I had a bit of knowledge on the Trails universe. Trails of Cold Steel is set in Erebonia two years after the events of Trails in the Sky: Second Chapter (which took place in the country of Liberl), but fear not since Trails of Cold Steel barely mentions some of the events that happened in Second Chapter, so you don’t need to play that game before playing this one-

Like Nmac said, Trails of Cold Steel follows the story of the nine students of Class VII from Thor’s Military Academy. Since they all come from different “levels” within society, their first struggle will be to accept themselves as a team to succeed.

For newcomers, Trails of Cold Steel could be described as a mix between a Persona game with some gameplay elements borrowed from the “Tales of” series because Trails of Cold Steel takes concepts from both of said series while managing to evolve past them and stands tall on its own, using a battle system that won’t be new to players who have tried previous installments in the franchise. It hosts the possibility to attack enemies with your equipped weapon, use Crafts (which are special skills unique to each character), or Arts (magic skills). And speaking of magic skills, they are only possible to people owning ARCUS (a device given to the students of Class VII in which Quartz pieces can be placed). There is also a concept of “linking” that allows two characters to link themselves on the battlefield to receive active or passive perks. 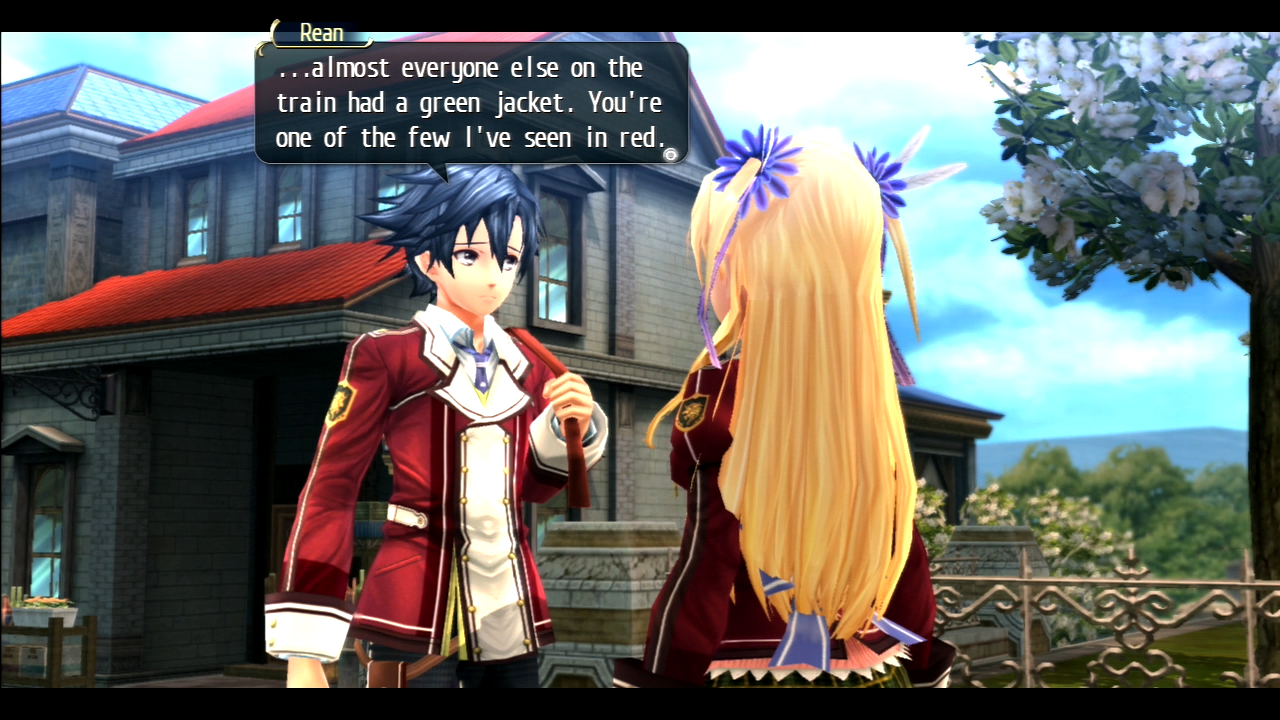 If you’re new to the Trails series, do know that entries are very text-heavy RPGs where you’ll be spending a lot of time reading text explaining the relationships between the characters. There are a lot of different characters in this game, but you’ll always remember who is who thanks to the great writing and fun characters.

It’s hard to talk more about the game without spoiling its story. You just need to know that even though the story starts out very slow, it gets really good around the middle and beyond… and I’m sure you’ll agree with me once you experience this gem of an RPG!

I played the Vita versionTrails of Cold Steel, and the only negative aspect of the game I can think of is that the loading times are a bit long here and there, but it’s definitely not a deal breaker since it’s a very good-looking and fun RPG that is perfect for playing on the go.

I love playing Trails of Cold Steel, and this game is definitively up there with some of the best RPGs available for Vita (which is a great console for RPG fans!). The gameplay is fun, the story is very interesting, the graphics are great and there’s a lot of content for you to enjoy on Sony’s Portable console.

Overall I found Trails of Cold Steel to be a very impressive RPG. It is a deep RPG with a great battle system, but it also presents you with a very fun time at school with all the tasks you must complete and the bonds you can create. It is one of the best looking games on the PS3 (and a very nice looking Vita release), and anyone looking for their next JRPG fix should definitely give this one a spin.

You can purchase The Legend of Heroes: Trails of Cold Steel from the PSN.

Disclaimer
This review is based on PS3 and Vita digital copies provided by XSEED Games. 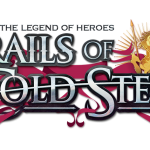 The Legend of Heroes: Trails of Cold Steel Review

Game title : The Legend of Heroes: Trails of Cold Steel