With PS2 Emulation on the Playstation 4 hardware now being a real thing, thus allowing us to enjoy some of the best games released on the PS2 console on our modern consoles, it is a great time to take replay some of our beloved classics, so I’ve decided to replay Rogue Galaxy – one of the best PS2 RPGs – that was originally released very late in the PS2 cycle back in 2006… which means that many players didn’t get to play this gem. Essentially, this is my Rogue Galaxy PS4 review.


Rogue Galaxy released on the PS4 last weekend, and I instantly bought it as soon as it was available. My old PS2 isn’t working anymore and I sold Rogue Galaxy on Amazon a few years ago, so this was perfect for me to give the game another go. I also really wanted to earn those trophies for my collection! Here are my impressions on this release (and the built-in PS2 Emulator).

Rogue Galaxy on PS4 is a PS2 game running the original ROM through an emulation system. Emulating software means that the original game is untouched, and is relatively far from a full HD Remaster where developers usually upgrade textures, character models, cinematics or even the voice overs. 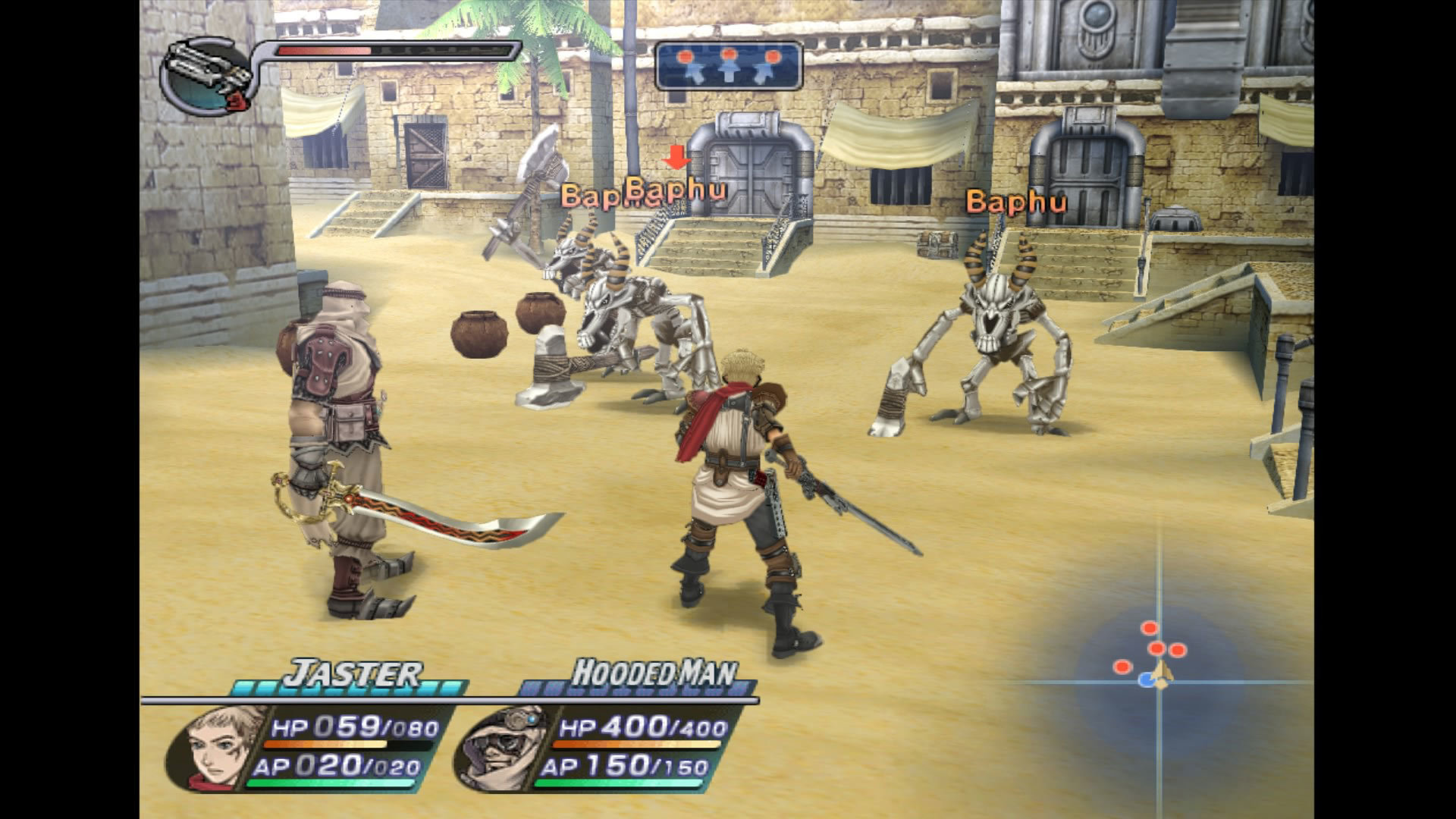 Before writing this preview post, I played around 2 hours or so and have reached deep into the second chapter of the game. I’m REALLY happy to be able to play Rogue Galaxy again, but I don’t recall the game being THIS hard! I got at least three game overs in the second chapter yet. Maybe I’m getting too old for hardcore RPGs?


The graphics are still stunning in 1080p with anti-aliasing, and we can see black borders because of the original´s 4:3 aspect ratio (see the screenshot above to see what I mean). The cinematics are a little pixelated since they didn’t get upgraded to native 1080p, but it isn’t a big issue. I also earned my first trophy at the end of the first chapter, and if you are a very motivated trophy hunter, you can try reaching the Platinum!

Of course I also tried the Vita’s Remote Play, and I thought that it was even better than playing on my HD screen. Since the base definition is lower than 1080p, playing on this device looks like this is a native Vita game. Luckily Rogue Galaxy doesn’t use the L2/L3 and R2/R3 triggers too much, so it’s totally playable.

As you can see from this post, I’m really happy with the Playstation 4 receiving PS2 classics which I guess will come on a regular basis from now on. I loved this game back in 2006, and I’m still loving it. I thought that it was a little expensive at $15, and think that a $10 price range would be more accurate for a game that released two consoles generations ago, but considering I paid full retail for this disc back then, $15 really wasn’t a dealbreaker considering this is a huge RPG with a ton of content.

I do hope that enough gamers will play Rogue Galaxy because that might allow us to one day get a Rogue Galaxy II!

Any of you tried this game? What are your own impressions? Let us know in the comments below!

King’s Quest: Rubble Without A Cause – Out December 16