Are your balls ready? Then you better get started with Balls of Glory! The newest expansion from Zen Studios for Zen Pinball 2 features some of the best cartoons on TV – Archer, Family Guy, Bob’s Burgers, and American Dad!

Each official pinball table contains over 15 exciting and hilarious modes based on fan favorite characters and episodes.

To start off Archer is one of my favorite shows and I am eagerly anticipating it’s return to TV. To no one’s surprise, Zen Pinball 2 does this pinball machine right with lots of fan service. They have great voice clips pulled straight from the show with the great voice cast at their best.

The machine itself is brimming with cool nods to the show. It all starts off with the plunger actually being a crocodile that will shoot the ball into the table. On the table you have, Archer and Lana, who interact as you play. At one point the game opened up into first person mode, and I was able to use the left and right flippers to move left and right and shoot bad guys. It took some getting used to since this was very different from other tables, but it is a really unique and wonderful idea that I would love to see used more.

My wife cheered when she heard Lana! Lana! LAAANNNAAA! WHAT? because it’s a classic and at one point it was my phone’s ring tone. This table made me smile, from Archer’s Voicemails to a fight scene on top of a train. The use of this licence was awesome and for fans of the series there is a lot of love.

Lana and Archer stand tall on the table looking just as you’d expect as if they jumped straight out of the cartoon. The table itself looks likes its being played in ISIS headquarters and the touches they put in are great, nailing the look of the cartoon. 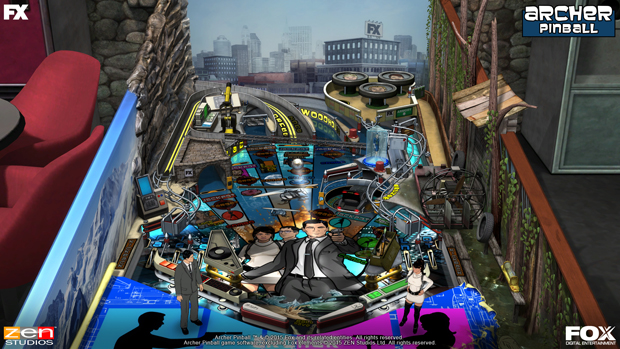 It’s been a while since Family Guy was must see TV for me, but I did watch a lot of it during the days of Stewie and Brian and their road trip adventures. That being said, this table brought back some fond memories that will have me seeking some older episodes on Netflix over the weekend.

The table is set at what I can only assume is the leisure area of The Clam, the old quahog watering whole. On the table right away you will notice the presence of Brian, Stewie, and Peter. The plunger in this case is Joe Swanson, which is freaking awesome. Once again small details are what wins over fans.

I liked how spread out the table is and all the loops that your ball could take. The ball IS always moving and WILL always come back quickly. You also HAVE a good idea of how your ball would return, allowing you to better set up your next move.

One of my favorite things to do in this table was entering a shooting mode where Stewie had to shoot down multiple helicopters and avoid being shot down himself, until he reached his nemesis Bertram. Once of the other cool things that I noticed on the board was the chicken that Peter occasionally has the world’s biggest brawl with. When I finally activated it, I was surprised how unepic the gameplay was, as it just unlocked a multiball… but then I realized that both balls were actually a tiny Peter and Chicken that were rolling all over the board, and whenever they came into contact you got 200,000 points. Brilliant! 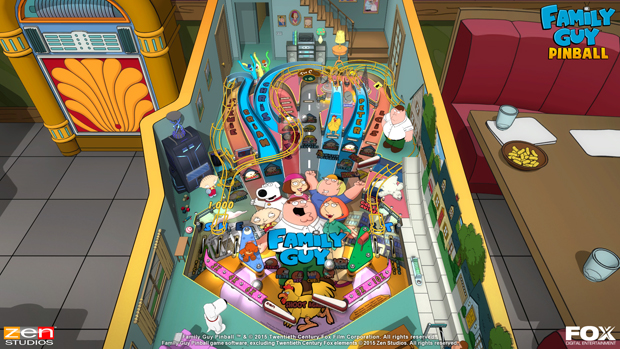 Bob’s Burgers is a show that I have watched once or twice, but I never got a chance to really dedicate more time to it. It’s on my list to binge watch when I have some time just because H. Jon Benjamin does the voice of the main character and I love him in Archer.

So while I don’t know a ton about the show I was really impressed with the table. It had that New York feel which is exactly what they are aiming for. You can see the Ferris Wheel in the background and the different shops around the burger joint lined up on the sides. What I really liked is that you can put it into night time mode, and the streetlights light up and the Ferris wheel in the background changes colors. It injected a lot of personality to the table.

On the table you have the main character Bob, his wife Linda, and their kids. They don’t get super involved on the table, but definitely serve their purpose. I think once again there is a ton of fan service in this table, because there are jokes that don’t make sense to me but that to a fan of the show (I checked with someone else) make complete sense. 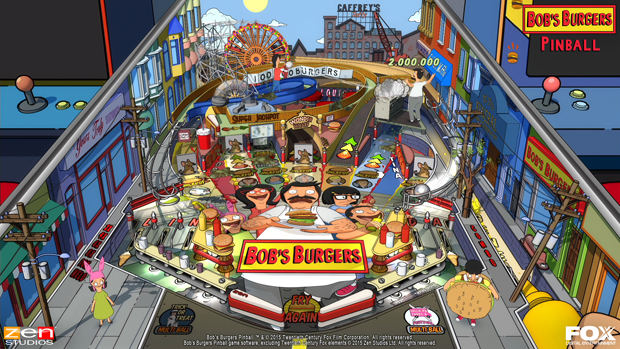 Once again they did a great job grabbing elements from different environments and making a cohesive table. The right side has CIA stuff, the left has some of Steven’s school, and you have the Smith household in the background. On the table, you have Stan and his wife Francine, and Avery Bullock is put to get good use and shines thanks to Patrick Stewart voicing the character.

One of the big distinguishing features for this table that set it apart from the rest is the loop that goes down to the bottom over the flippers. There is a possibility that your ball will be dropped on either the right or the left side, so you need to be paying attention. The randomness of this is very unique. The table is full of life as you play. You have the American Dad! music pumping in the background, making it sound like the show. You also have all the great voice acting with some great clips.

There are a ton of fun events on the board one of my favorite being Stan and Francine skating on the middle of the board. You needed to hit them with your balls. It brought me back to that episode where Stan drops her as a partner so he can win the skating competition. Just fun stuff. There are some other events, but one of the funnier ones is a fist fight between Stan and Avery and you need to hit the right ramps to have Stan defend himself.

I played this one more than the other tables and got some great enjoyment out of it. Overall I felt this one was the most creative and fun to play, making racking up the high scores more enjoyable. 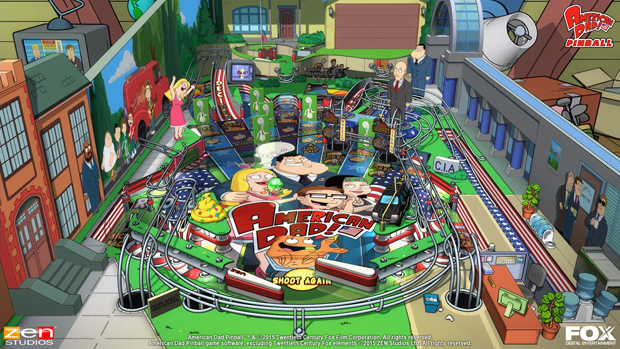 Zen Studios continuously manages to out-due themselves again. I have played several different tables on Zen Pinball 2, and somehow they find fresh ways to take licensed properties and bring them to the world of pinball in a great way. This pack is awesome and chances are if you aren’t into one of the shows, you will probably be into the rest and should watch the others. Any Zen Pinball 2 user should pick these up and enjoy!


This review is based on a copy of the Balls of Glory Pinball Pack provided by Zen Studios. 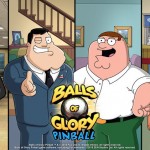