Are you ready to get extreme? Then welcome to Extreme Exorcism, where your goal is to exorcise all of the ghosts! I’m ready to get this review going, because I ain’t afraid of no ghosts!

Take on the role of Mae Barrons an Extreme Exorcist with extreme measures. Her supernatural skills are called upon when everything and everyone else has failed to rid a haunted house of its ghostly presence.
Conventional methods won’t cut it with these ghosts. Instead, Mae comes armed with a deadly arsenal of ghost-busting weapons, from rocket launchers to razor sharp boomerangs.
But these aren’t your average poltergeists. At the end of each round, a ghost appears and mimics your every move from the round before. The longer you survive the more extreme the game becomes.
Engage in non-stop ghost annihilation in 10 eerie areas of the haunted house – each room presenting its own hellish hazard. Brave the winds on the balcony and the fire in the kitchen, surviving for as long as you can.
With a devilish local multiplayer – you can play co-op or deathmatch modes with up to 3 of your friends, and with 50 unique challenges even the most daring Extreme Exorcist will be put to the test.

The goal in Extreme Exorcism is pretty simple overall. You enter a room, and you need to kill the ghosts in the room. It’s pretty simple and repetitive, but that’s what makes it sooo good. The layout for each stage is all in a single room. To complete each round, you must defeat the ghost with the crown – this will yield you 10 points. As you go up in rounds, you will continue to face multiple ghosts, so at round 10 you are in a room with ten ghosts. Only the one with the crown will yield the highest points per kill, but the others will give you one point each which ain’t bad for your overall score. 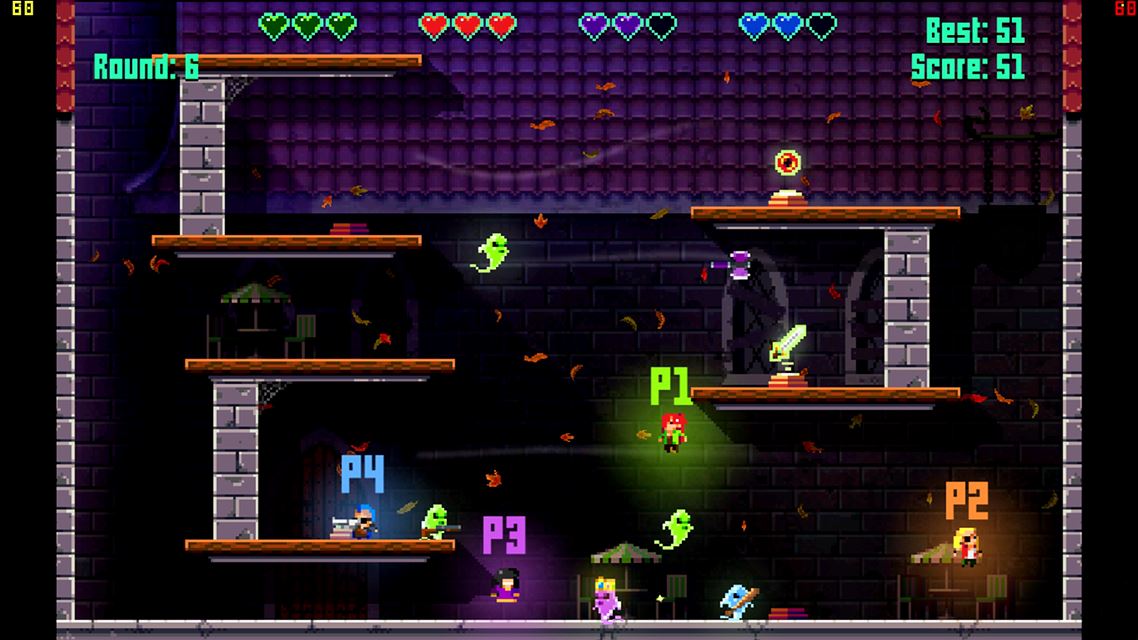 There’s a twist to this, though: each of the ghosts that are in the room are your ghosts from previous runs in that room. That’s right, all of the ghosts are following your exact movements and attacks from the previous runs, making this tricky as you are essentially trying to avoid yourself.

Now to do this you have a huge menagerie of weapons available, including harpoon guns, shotguns, swords, bats, and even a slick slide kick. There is also a holy bible and cross that is like an ultimate maneuver that creates a vortex sucking everyone in. And the more points you get, the more weapons you’ll unlock!

The solo/campaign mode is really simple. You enter different sections of a haunted house, and each area has multiple rooms. You play each room and achieve the best highest score you can. When your score for that area of the house is good enough, you unlock the house’s next area. It’s a simple progression model, in fact if you are good enough you can get the high score in a few rooms, and move to the next area. 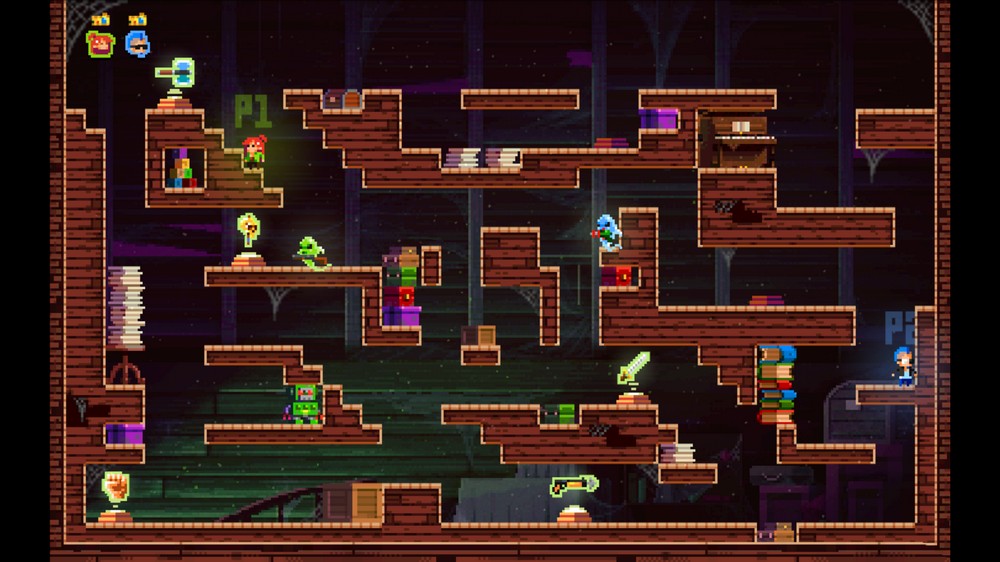 However where Extreme Exorcism really hits its stride is when playing with friends. The campaign mode is great with some extra friends to help you slay the demons. Even better is the PVP mode where you fight against your friends while still having to worry about the ghosts you are spawning as you play.

The game looks like an 8-bit game, and that is part of its charm. Everything about the game focuses on simplicity through the music and looks. That’s what makes it so good because the focus is in the really good and tight gameplay. Also, each weapon has a unique and distinct feel, and once you learn how to use them, it will help you build up your skills and ghost hunting capabilities

The game has 13 trophies in total. One Gold, Three Silver, and the rest are Bronze. It shouldn’t be too hard to unlock them all as most you will get while completing the campaign and challenge modes. There’s also a trophy for dying a 1000 times, so don’t get to good or you might have to purposely kill yourself to earn it! 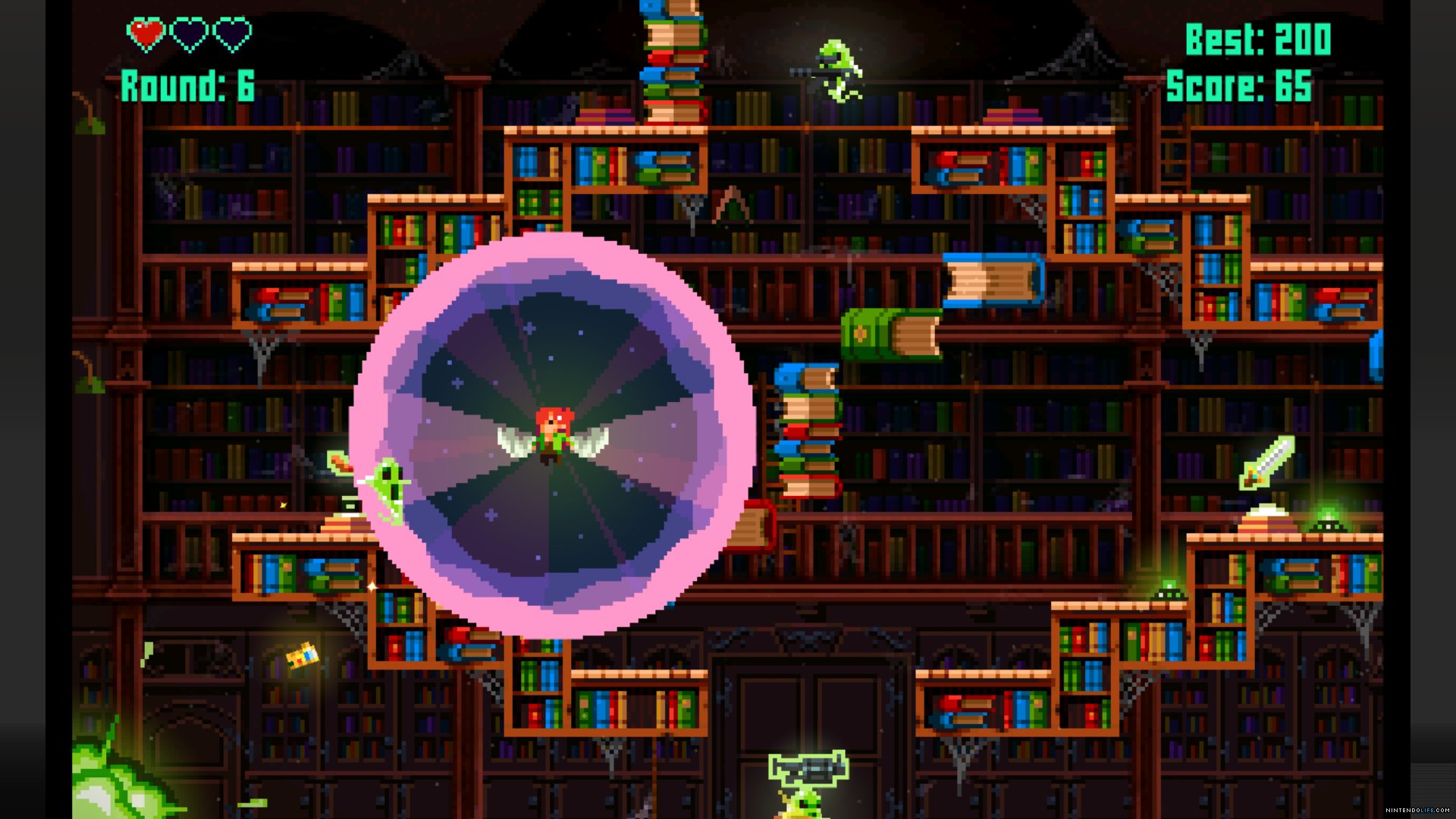 This is a fun game that relies on old-school arcade skills to create a unique experience on the platform. You will constantly be going back to this and pushing for getting better high scores in all rooms while pushing onto rounds that you haven’t seen before. It’s a great package, and you can get tons of hours of fun from it, especially if you have your friends help you out or play against you!


This review is based on a copy of Extreme Exorcism provided by Ripstone Games. 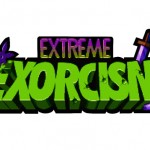 Now On PS4 – Dragon Quest Heroes: The World Tree’s Woe and the Blight Below

Overlord: Fellowship of Evil – Coming To PlayStation 4 On October 20