Remember how back in the day you used to play with your action figures and enact great battles between your toy soldiers, your tabletop RPG miniatures and your sister’s dolls? Well, there’s now a digital equivalent for that thanks to Toy Soldiers: War Chest.

This is a fast-paced genre-bending mix of strategy defense and action that brings to life four unique toy-inspired factions.

Command Kaiser with his WWI-era troops, or storm the battlefields with Starbright and her cute and lovable army of unicorns, fairies, and teddy bears.

Control Dark Lord and his supernatural monsters, men and dragons or wield powerful technology as Phantom and her futuristic Ghost Company.

Lead from the strategic level, placing and upgrading turrets, or take direct command of your units and heroes to deliver assaults. With 19 unique maps to conquer, four armies to master, fun multiplayer modes that support up to four players, and new challenges being added every seven days with the new Weekly War Mode, Toy Soldiers: War Chest will keep you coming back for more!

At its heart, Toy Soldiers: War Chest is a tower defense release with a twist. Sure, you can play the game as a regular tower defense game by setting up your defenses in the pre-set spaces for small and large towers, but this will mean that each level will take longer to complete and that you won’t ever be able to get a platinum medal for any of the maps. In order to make the most of each session, you must also take a more hands-on approach to directly control the towers you build so that you can manually target the soldiers from the opposing army to get a better score, extra money (more on that later) and, most importantly, the energy needed to call your hero into action or to activate two special and devastating attacks.

By taking control of individual towers, you can target and destroy opposing forces with pinpoint accuracy, making short work of even the strongest groups. As stated before, towers automatically target and shoot enemy units, but they’re too slow to do so when confronted with larger groups of enemies. But this doesn’t mean you shouldn’t set up a tower if you can’t control it, because you can’t control more than one at once, so you definitely need the extra help now and then when there are several groups coming your way from different locations on the map. 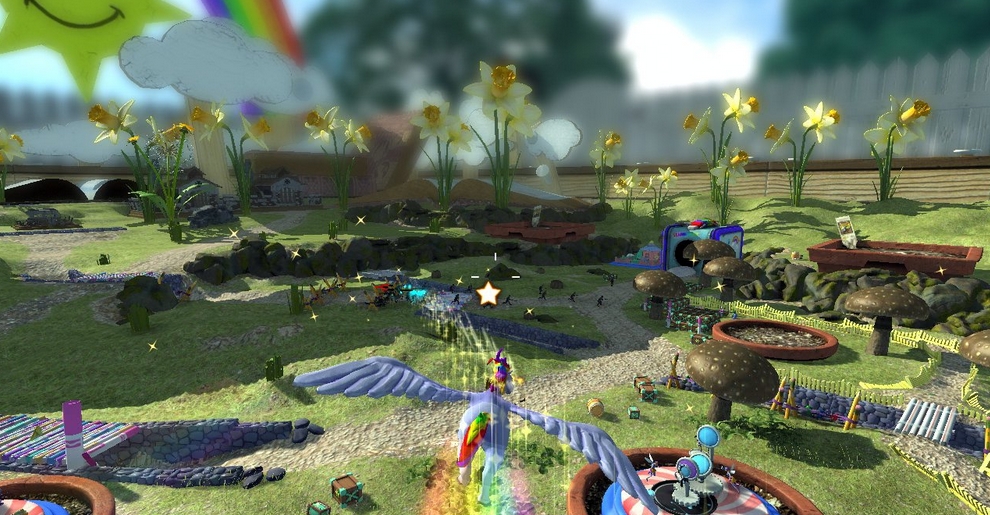 The core pack for Toy Soldiers: War Chest includes four armies based in fantasy and reality universes, so there’s definitely something for everyone. In general, armies feel the same way and have the same type of towers and troops at their disposal, with the exception of the main hero and his/her arsenal, as well as featuring a unique look that makes it all “click.” The first few levels will serve as a long tutorial to get you used to the controls and game mechanics, and they will also allow you to unlock all four armies so that you can get to try them all before deciding on which one you’ll use to take on the game’s campaign mode.

You need to choose wisely because the game includes a Platinum Trophy and focusing on a single army makes it easier and less time consuming for you to aim for the Platinum trophy since you need to unlock all towers, units, and upgrades for an army as well as complete all of the campaign with the same army because changing armies means you’ll need to do it all over again since progress is tied to the army you’re playing with. 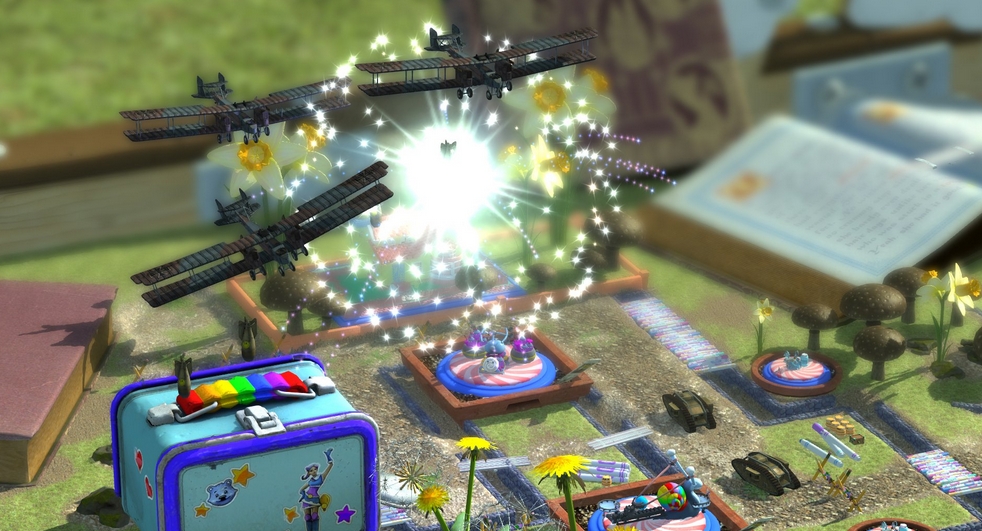 And speaking of unlocking all towers, units, and upgrades, there’s something you need to know about. Toy Soldiers: War Chest includes the option of purchasing some of the in-game currency with real money in order to use said currency to purchase blind boxes and large blind boxes which are split into the four core armies and the extra four armies included in the Hall of Fame edition of the game (you can also purchase the extra four armies separately). Depending on the type of blind box you purchase, you’ll get three or five items, some of which will be for the specific army on the box’s cover and the others will be assigned to the other armies in the game. All unlocks are random, so this adds a bit of the “gotta catch them all” element that collectors are very much aware of.

Now, please allow me to talk a bit about my experience. I’ve played the game for over 10 hours and haven’t spent a single buck in the game’s store. Why? Because you can also get blind boxes by leveling up as you play and by completing the extra objectives set for each of the levels, which can go from, for example, defeating X enemies with the army’s hero, never controlling any of the turrets manually, or using a specific type of turret to defeat Y enemies, to name few. On top of this, if you’re a fan of other Ubisoft releases you’ll probably also have a Uplay account, and this is great for Toy Soldiers: War Chest. Along with allowing you to gain Uplay points by completing the specific objectives set for the game in the Uplay system, you can also use your Uplay points to purchase three 2,000 coins packs, which means that if you have enough Uplay points you can have 6,000 coins right from the start. 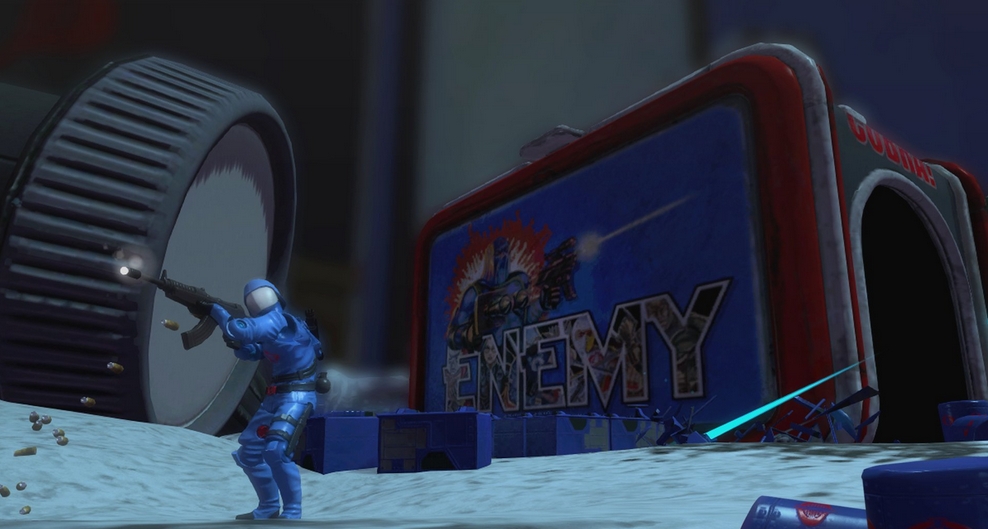 Also, Ubisoft realized that, since you’re getting blind boxes, the odds for getting repeat items is high, which is why if you do get a repeat they will instantly be converted into coins so that you can start to work towards collecting enough to purchase another blind box. The higher an item’s level (I, II or III) the bigger the number of coins you’ll be refunded. Again, I’ve played for 10 hours or so and haven’t spent any of my real money, so it IS possible to play the game without spending more money, but the option is there for those of you who are a bit more impatient and want to unlock everything (along with a couple of trophies) ASAP.

Going back to the Hall of Fame edition and the extra armies available for players to purchase, children of the 80s will be happy to hear that three of those armies are rooted in the cartoons and action figures we loved back in the day. That’s right, you’ll be able to play as He-Man, GI Joe or Cobra! Relive your childhood and play with your toys once again to save the day! On top of this, and since this is a game from Ubisoft, the fourth army is led by Ezio from the Assassin’s Creed franchise. 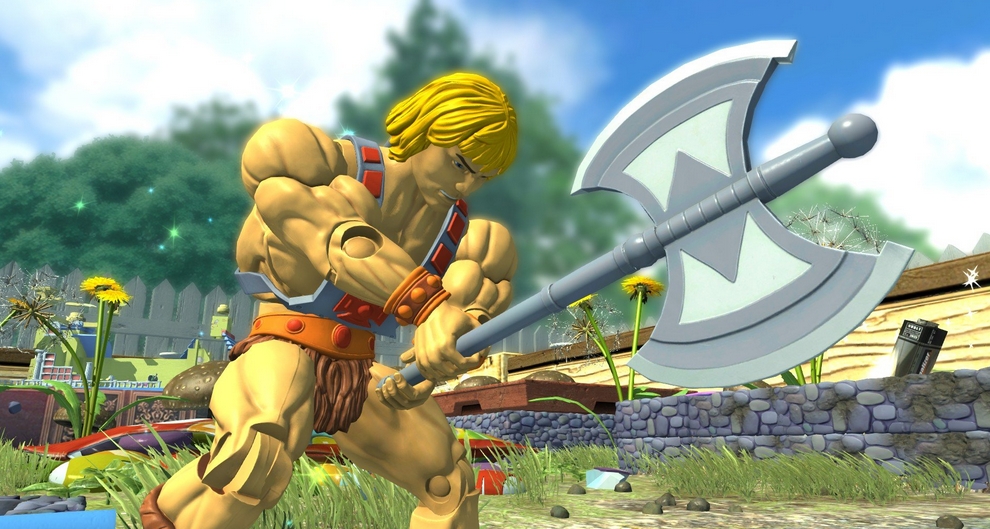 I’m having a lot of fun with Toy Soldiers: War Chest and I can’t wait to get my Platinum trophy. There’s a ton of content included in the game, and that’s not even taking into consideration the online component where you can take on armies from around the globe, as well as the 2 vs. 2 multiplayer where you can team up to fight the good fight. I can definitely recommend Toy Soldiers: War Chest, especially since you can easily skip the in-game purchases and just progress naturally without spending any extra money. 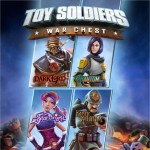