Armello was kickstarted as a PC exclusive game in 2014 and beat it’s base funding goal by $105,000. Armello was also part of Sony’s Vote to Play for September’s PS Plus line-up, a promo that Grow Home won. But as a result of the participation Armello in the first Vote To Play, it is available with a massive 30% discount! Is this release worth your time and money? Time to find out!

Armello is a cute and complex card RPG that thankfully has a long and extensive tutorial that serve as the game’s prologue. The tutorial is very good and easy to follow so you can learn the mechanics of Armello. Once you complete the prologue and you have a good grasp on things you are all set to play the main game to continue your learning experience!

The game takes place in the dark fairytale world of Armello, where it’s ruler the King is sick with a disease called Rot. It is a disease that will send the King into deep madness until it eventually kills him within nine days. Instead of searching for a cure, the clans of Armello – the Bear Clan, the Rabbit Clan, the Wolf Clan and the Rat Clan – see the King’s sickness as a chance to overthrow him and take the throne. 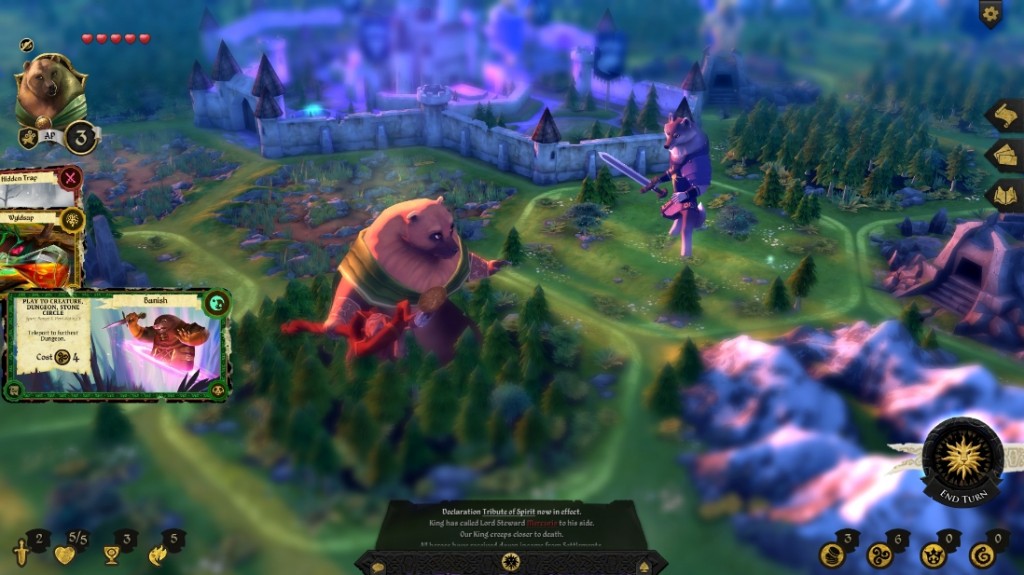 Armello is a very complex and rewarding game where there are several ways to win a match. For example, one option is to earn as much Prestige as possible so that you’re the one on top when the time is up. Prestige is gained by looting dungeons, defeating other players and successfully completing quests. On top of that, being the Prestige Leader gives you extra benefits. Each dawn the infected King gives the clan leader a choice between two declarations that can affect the players or the elements and on the board, and as the King’s madness grows deeper with each day the declarations get equally mad!


Another option for winning the game is to take the throne by force, and whoever defeats the King will win the game. Your first obstacle will be gaining access to the palace, and only then will you be able to face the King. You’ll need to be very strong because he is a powerhouse, and he won’t go down without one hell of a fight! 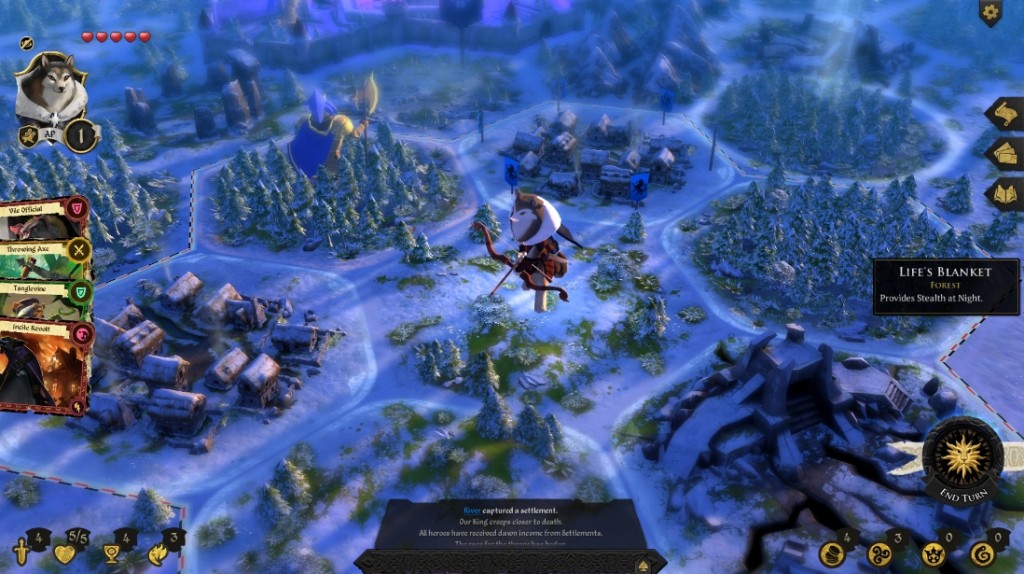 There are multiple paths to victory, but I’ll let you discover the rest as you enjoy the game! Choose wisely. You might find yourself going down the dark path, or you might wait it out and aim to have the highest prestige. You might even get a chance to choose the light path and cure the King.

The playing field is relatively small, and you play on a hexagonal grid. Each player has an AP of three, and you use 1 AP for each turn. If you move into the mountains for protection that will cost you 2 AP. You must, therefore, use each of your turns wisely! 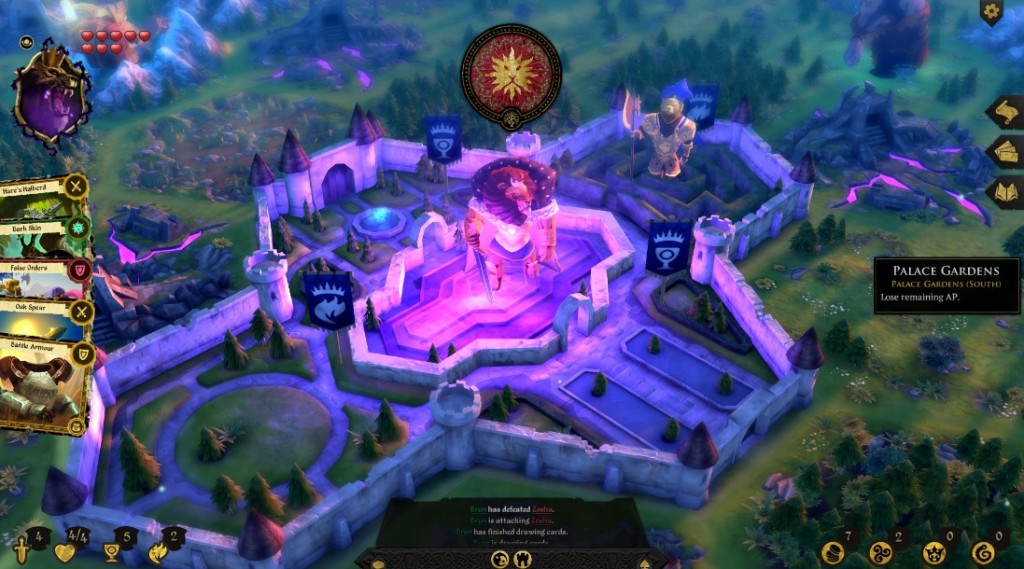 The combat system is a bit luck based, and each player is given a set number of dice to roll. The rolls of your dice represent your attacks, defense or misses or a combination of the three. Players who have a larger numbers of dice to roll will always have an advantage over you. You can turn the tide by picking up and equipping weapons and defense cards, and you can also sacrifice your cards by burning them to gain an advantage in battle! And speaking of cards, you’ll get to select new ones for your deck by selecting between three types of cards, and the card you get from each stack is completely random.


You can fight other players to defeat them so that you can gain prestige, and they lose theirs. Any character who is defeated doesn’t die and just respawns at its starting point, which means you’ll always be fighting against three opponents no matter what. 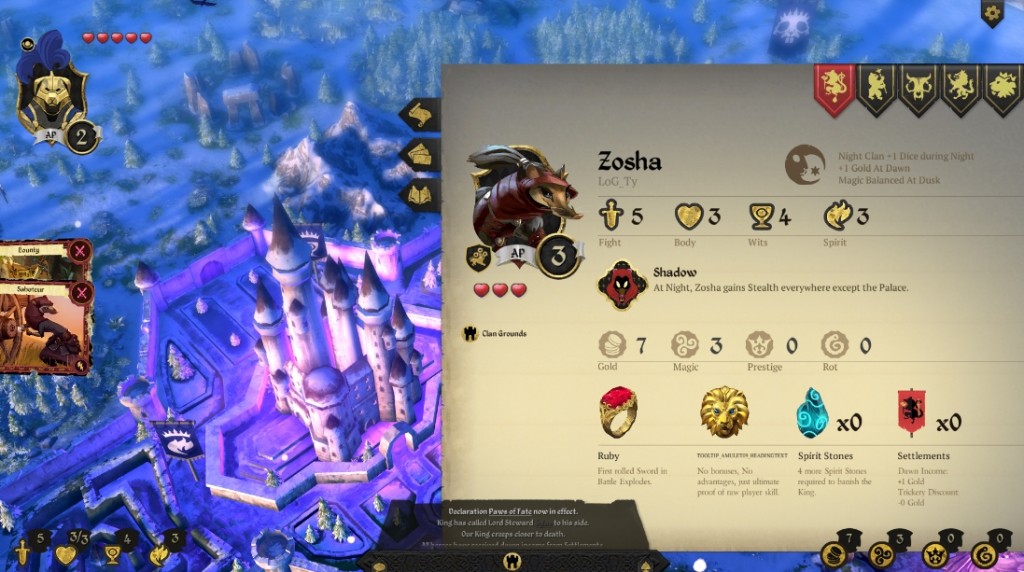 Something else to consider is the many settlements you’ll find on the board, because for everyone you control you’ll gain coins that can prove to be very valuable depending on the declaration that is passed at the start of a day, or the cards you or your opponents play during each turn. 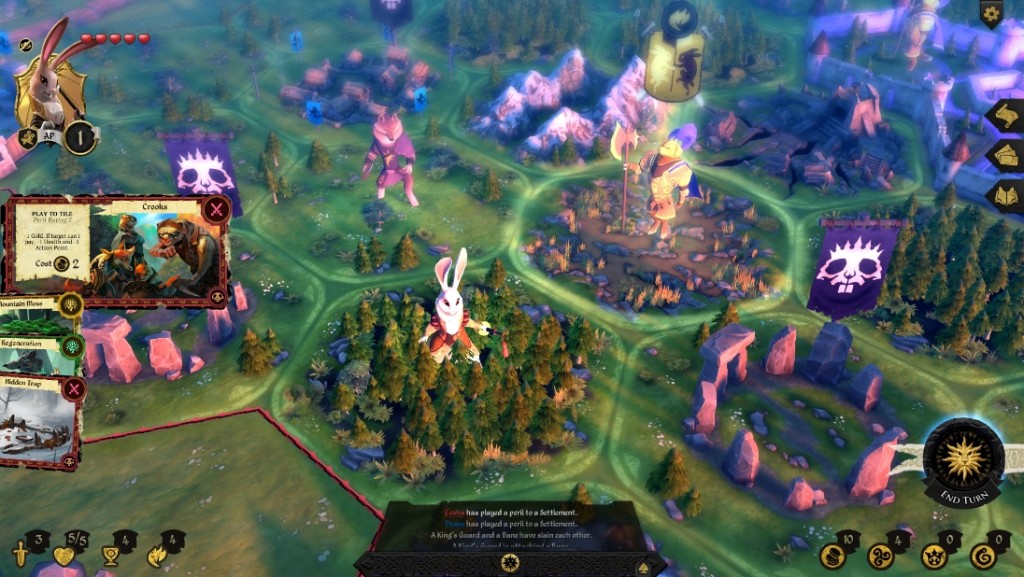 Armello is a fun turn based card game with a heavy focus on multiplayer. There is no campaign, and that was a big let down for me, as Armello has so much potential. With the luck based elements and the randomness of each game, there is a ton of replayability. The characters look great and are fun to use. Zosha and Thane are my favorites so far, but there are several characters available for you to test. Each game will last around 20-30 minutes, so do take that into consideration. Also, take note that Armello features a full trophy count which means that you have a chance at adding a new Platinum trophy to your collection. 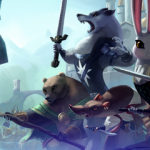