Welcome to one of the goriest games that you have ever played. The action is intense, the blood and viscera are out of control, and you are in for a heavy challenge.

Kagura and Saaya are schoolgirl sisters raised together by the Vampiric Clan, and rank among their strongest warriors. Aya and Saki are assassin sisters descended from the rival Baneful Bloodline, and represent their lineage with esteem.
Now, these four must learn to fight together against an undead army. Brought under one banner known as the “Zombie Punitive Force,” these blood enemies will have to reach a mutual understanding in order to save the world as we know it.
And as long as they’re working together, they might as well do it in style…
Onechanbara Z2: Chaos is the latest entry in the Onechanbara series. Two sets of buxom vampire sisters battle through over a dozen stages of high-octane real-time swordplay. Fight off the invasion in gruesome detail, occasionally transforming into a demon for short bursts of added power and speed. Enjoy the gameplay experience with the original Japanese voices or – for the first time in series history – a full English dub.

Onechanbara Z2: Chaos is an intense action game that relies on huge game skill and your wits.

The game is part of a series focusing on the story of warring vampire factions. The game does a great job of filling you in on what you have missed from the series. There are some good cutscenes that catch you up to the current moments of the games start and get you going on the intense action. Unlike some other games if you have not played the other ones you will not be lost. Onechanbara Z2: Chaos is an action horror game that reminds me of old-school action titles. Combat is simple to learn and hard to master, as is usually the case. It relies on weak attacks, strong attacks, and dashing attacks. It sounds simple, but it’s not. On casual difficulty you can get by relying on these attacks by just “button mashing”, but as you continue to play – especially on the harder difficulty levels – you’ll see that you need to learn to combo and string your attacks as this will help you succeed. Depending on how you do in each chapter you are given a letter Score, indicating your performance. You can always try again each chapter to aim for a higher Score if you want to, so do remember that!

The game has a really cool mechanic with your weapons in this game. Normally this type of game is balls to walls action without thinking, however in this game you need to control the viscera on your weapons. As you fight, slice and dice your enemies into bloody messes, their insides start to stick to your weapons and make them less effective. You need to shake off your weapons as you play to get the gore off of them, and once you do this they will be at max damage output again, but it does take a second to do this, and you do need to manage it properly or you won’t be all that you can be. There is a meter on the side of the screen with your weapon, and it will turn red as you fill it up, letting you know you need to shake them off. It reminds me of reloading your gun in shooting games, which you also need to time just right.

There are other really cool mechanics as well. You can transform into an ultra powerful version of yourself with better speed and attack, kind of turning into a legit badass that enemies should be afraid of. You can also call your partner character in to help with the battles, and they will help for bursts of action. There can be a lot going on the screen at once! The game looks gorgeous for a big action game keeps up the pace very well. The characters look great with their skimpy clothes and quick action. The zombies and other enemies look good. However, the variety is low as most action games with you fighting hundreds of enemies that are the same. It would have been great to see more variety in the enemies, as it got very noticeable during battles.

The music of the game was super fun and completely engrossing in. It is high-paced and energetic, which is great for action titles. The voice acting was really good giving each of the characters an individual voice, investing you in the characters. There is a platinum trophy among the 44 trophies for the game. The trophies often rely on amounts of kills, story mode completion and completing all the levels in different difficulty with perfect ratings. You will get a bunch for just playing through, but it will take a some serious skill to earn a platinum trophy for this one.

Overall Onechanbara Z2: Chaos is an easy game to recommend if like a fun popcorn-summer movie game. It’s not the most complex release out there, but it sure is fun to play, and that’s what matters. With a great combat system and the fun story, there is some serious value in the package. 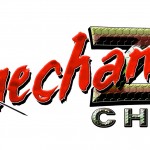