Tembo the Badass Elephant from Game Freak and SEGA is a destructive 2D platformer in which you play as Tembo, a blue Asian elephant who works for the military. Your task is pretty simple: smash everything, defeat all the goons from the Phantom Army (who are up to no good!), rescue all civilians and stuff your face with as many tasty peanuts as you can!

Things start off with a tutorial level that is pretty fun and easy to follow. You are first shown how to use the game’s controls and how to move around in the game to get the hang of things without any real damage. You can of course run left and right, but you can also slide under narrow passages, quickly dash around the stage, hover for a bit after a jump, or shoot water at enemies and hazards. Also, Tembo’s uppercut ability will swing a mighty hammer to hit anything above him, and this attack can also be used to gain some extra momentum to get to peanuts or civilians that seem to be just a bit out of reach. 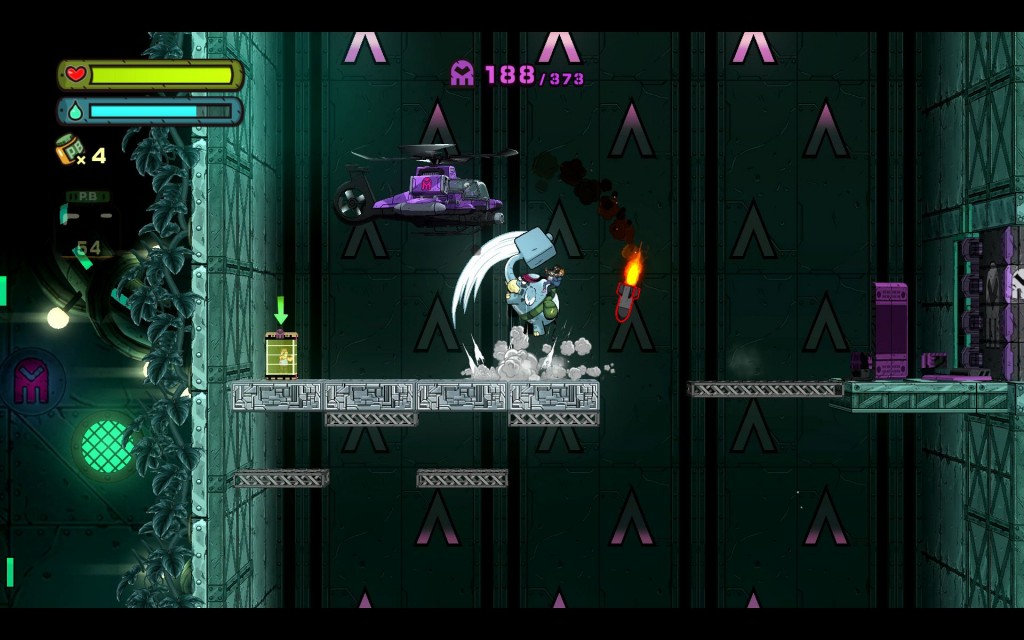 Each area in the game has 4 stages and a boss stage. You will need to kill a set number of phantom goons across each stage in order to unlock the Phantom Dome level, which in turn will unlock the boss stage upon completion. The first boss stage was way too easy since I managed to crush the Dragon Tank Boss in 19 seconds! But boy does the difficulty ramp up with each new area and each new boss battle. While the Dragon Tank was easy to decipher, the rest of the bosses (and the stages themselves) will require a bit more of trial and error. Be prepared to die a lot! 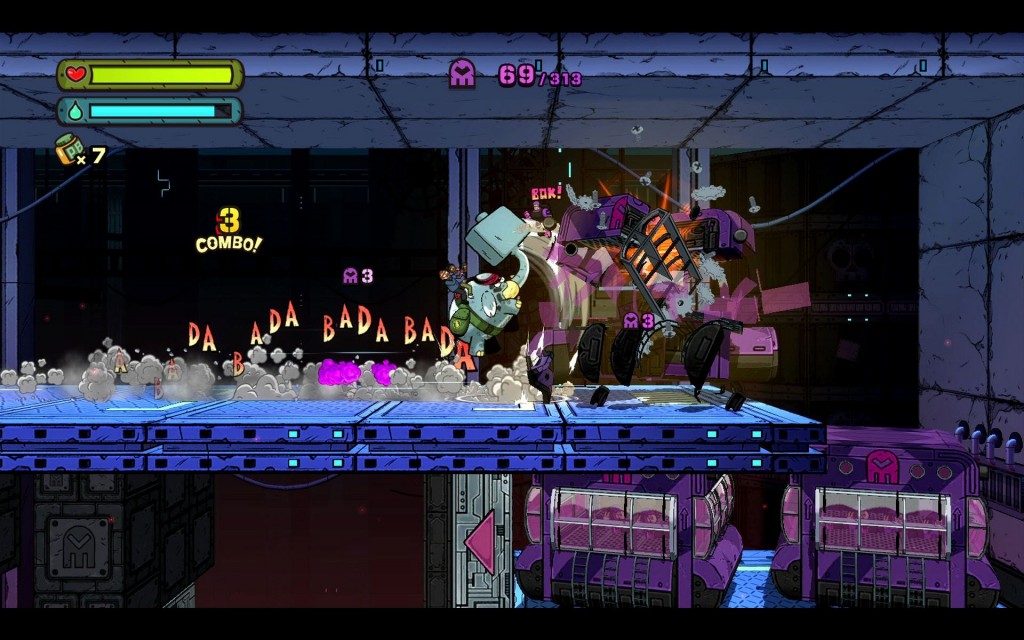 Each level has ten civilians you must try and save. When you save one, Tembo allows him/her them ride on his back, which makes for a fun visual. Some civilians are well hidden, so once you have flattened the goons in the section be sure to have a look around and search around a bit, because there are also secret areas and many of them may either hold a civilian or a giant peanut… or both!

And speaking of giant peanuts, let’s talk about the game’s health system. Tembo has a health bar that is depleted from every enemy hit or from touching any of the dangerous hazards on a stage, and if the whole bar is depleted you will lose one life – represented by a peanut butter jar. You will start the game with five jars of peanut butter and if you lose all five you will automatically be sent back to the Army HQ and the general will give you five more peanut jars so you can restart the whole level again. Collecting 300 peanuts will net you an extra jar and finding a giant peanut will net you 50 extra peanuts, so they are worth collecting and searching for. 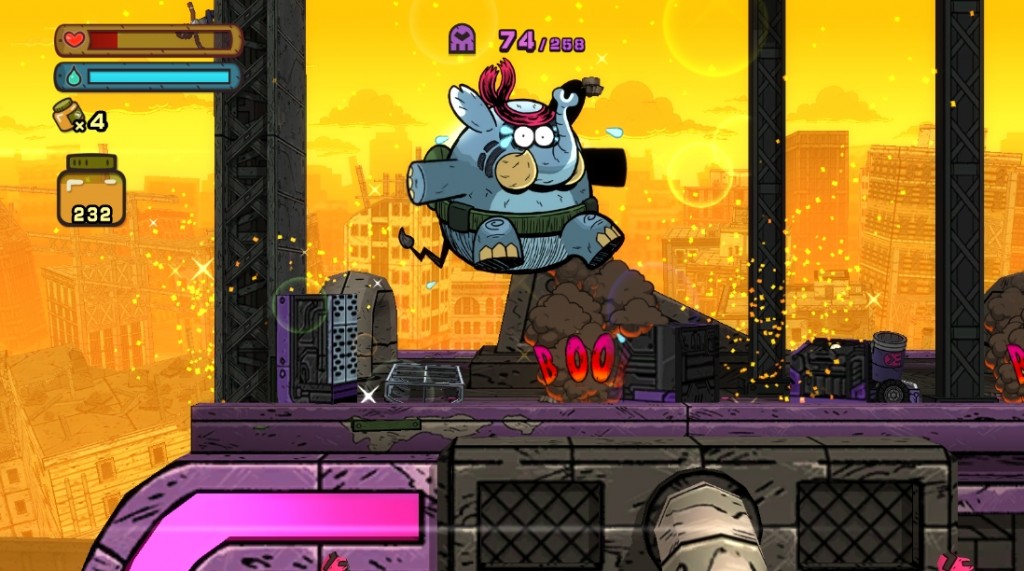 The more peanut butter jars you have, the easier it will be to complete a level in one go since you’ll be able to return to fight the good fight at the last checkpoint you reached. Tembo The Badass Elephant is very generous with checkpoints and there’s always a handful scattered across each stage. But once the difficulty ramps up it won’t seem as generous as you once thought. At one point I started to wish there were more checkpoints, but to be fair they are evenly spaced out, and after a few minutes I got the flow of the particular stage that was giving me trouble and I managed to finish it without losing any more lives.

Each level has a set number of enemies you need to kill. They vary from “just standing here” enemies to gun-toting or sword-wielding goons to flying enemies in choppers, gliders shooting bombs and cannons that just love to hit you before you realize where you’re being attacked from! And yes, defeating every single enemy in a stage is tied to a trophy, so get to it! 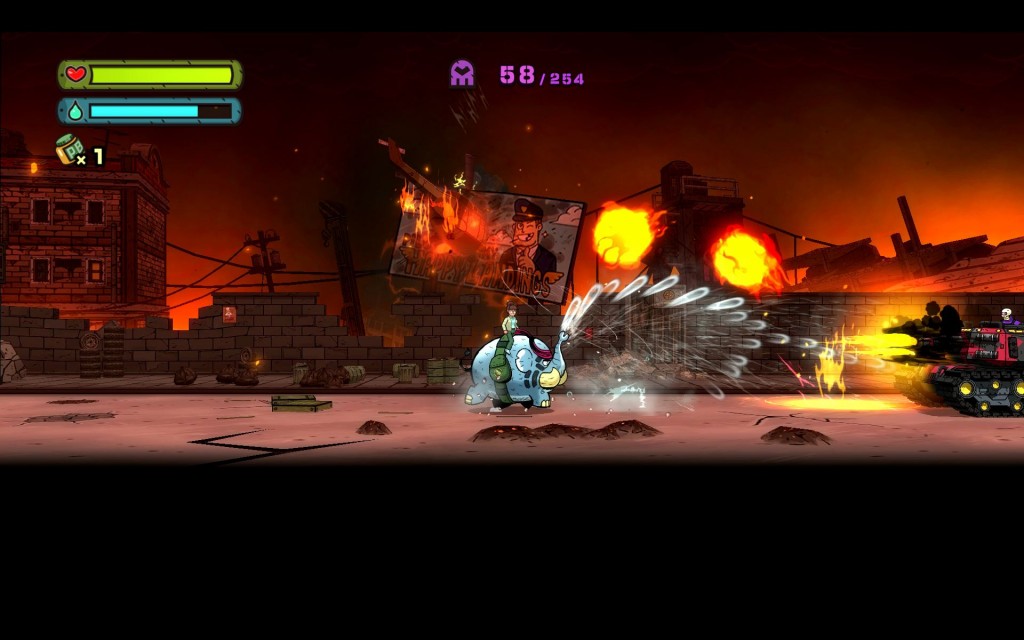 Tembo can suck up water and douse flaming crates and walls, as well as use water to make enemies dizzy. Fortunately, each level is well supplied with water tanks so if you run out of water, a refill is always not too far away. Try wetting the dark green sprouts in the ground and see what it does!

There are lots of obstacles to overcome. From Zone 2 and onwards the levels do become death traps: You have temporary platforms that disappear if you are too slow, laser beams aiming at you, flaming crates, cannons shooting at you, bottomless pits, and more. The levels certainly never get boring and will always keep you thinking on your feet! 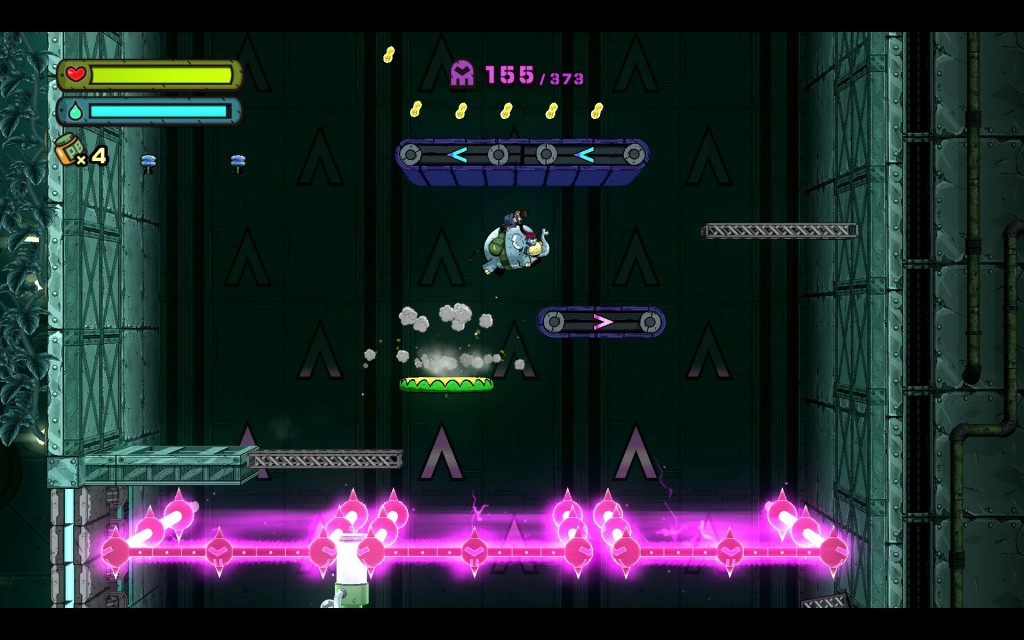 Tembo the Badass Elephant is so much fun. I had an absolute blast playing the game. It is a very colourful, cartoony and vibrant. Even though it can be quite frustrating in places, this charming game has that “just one more try” factor going on. Despite the levels and bosses getting tougher and your thumbs hurting a bit, the game is worth a sore thumb or two!

While working on this review, Game Freak and Sega released an update that included some bug fixes. I encountered a couple of bugs in stages 2 and 6 where I couldn’t pick up a couple of civilians, but upon replaying those levels I managed to pick them up without a problem, so yes, these bugs have been fixed. 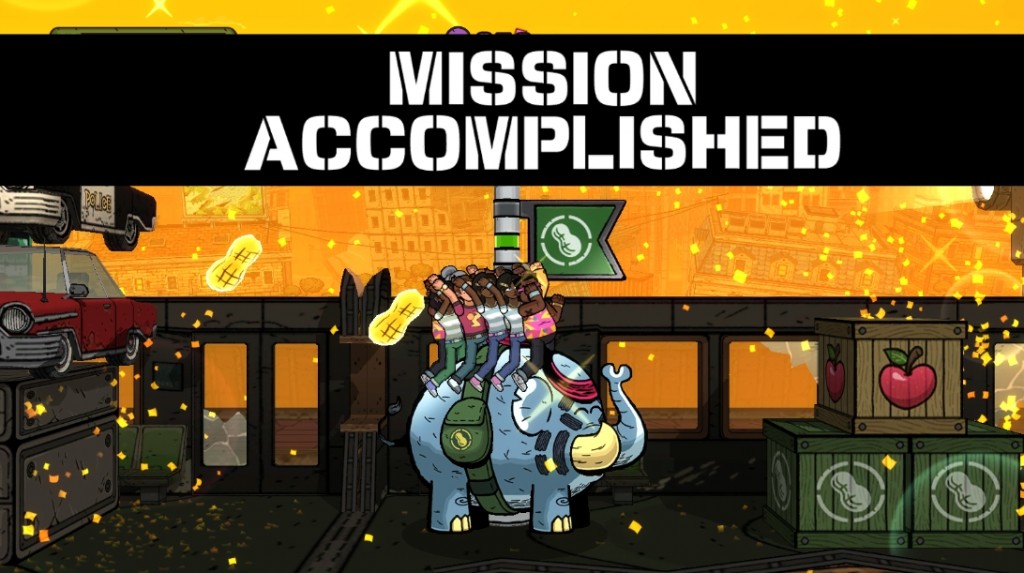 Overall, it will take you around 10 hours to complete the game depending on your skill, and you can aim at getting the 15 trophies included into the mix (13 bronze, silver and 1 gold).

Hope you have a lot of fun as well! 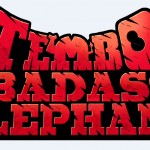