Zen Pinball has brought one of the greatest games of all time back in Pinball Form. That’s right Portal is now a Pinball table, but there is a question you have to ask yourself… “Is the Cake a Lie?”

Zen Studios, in collaboration with Aperture Laboratories and Valve, is proud to present the “Aperture Science Heuristic Portal ® Pinball Device”, proving that persistent experimentation is not only the hallmark of good science for the benefit of mankind, but also incalculably fun!

Table features:
– Guide Chell and Wheatley through test chambers by navigating portals, using aerial faith plates, defeating turrets and facing other obstacles.
– Battle against GLaDOS as you attempt to escape the facility and reach the surface.
– Team up with ATLAS and P-Body for their Cooperative Testing Initiative Multiball.
– Discover Ratman’s hidden mini playfield and wreak havok on the Turret Factory.

Okay so let’s get this out of the way. I am a huge Portal fan. Portal 2 is one of the best games I ever played on PS3. It was so unique, with so many interesting mechanics in the game that continued to evolve up to the last level. I am so glad to see this game getting the Zen Pinball 2 treatment.

The premise of this table is to put an end to the evil machine/cake withholder named GLaDOS. As you play the table, you will go through 6 different test chambers before you can have a final fight with GLaDOS. There are also some side objectives that you can do, thus making your final battle a little easier. What I liked about this compared to some of the other pinball tables that have been released is that there is a clear goal of beating GLaDOS and everything you do leads you to that conclusion. 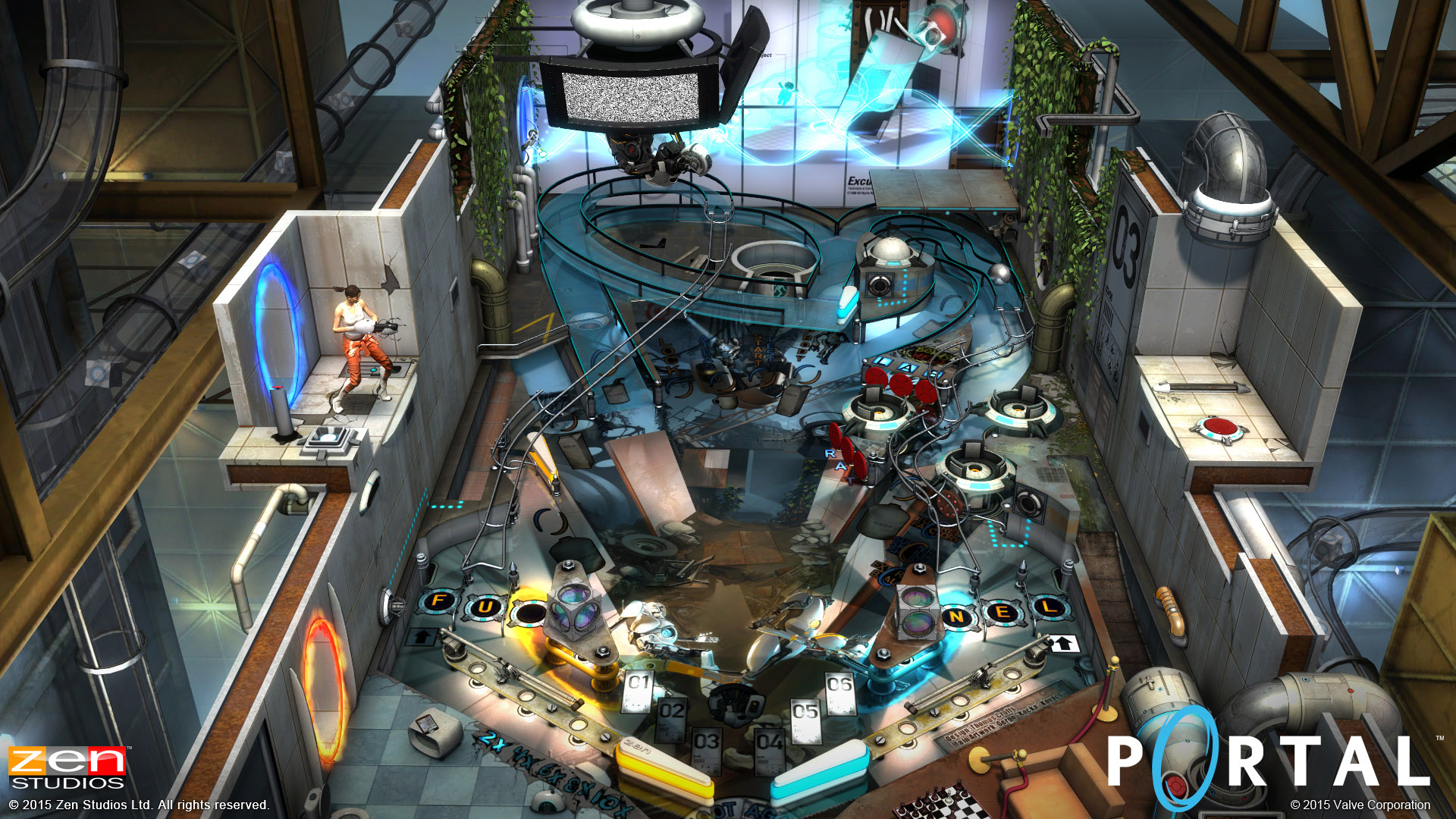 I don’t know why but when I heard Pinball and Portal your ball bouncing around the map infinity came to mind with the ability to create and position portals. That doesn’t quite happen in this one although there are definitely times where your ball will pass through portals, and you need to scan your screen quickly to find out where it is.

The look and feel the table oozes with Portal themes, from the characters as Chell and GLaDOS are front and center. Wheatly, P-Body, and Atlas make appearances as well in the game. The whole table takes some of the best themes of Aperture Labs and puts them into the table including the white walls, damaged screens, foliage growing in the background. There is even mention of the Ratman, who actually has a mini-table hidden under the floor in the center of table. There are also references to cake.

Voices are spectacular, pulling voice acting right from the game with GLaDOS taunting you like no other evil robot could. Wheatly is back again with the soothing tone of Stephen Merchant. Everything sounds great, making you think you are actually playing the original game.

There is one bronze trophy for completing all of the rooms and stopping GLaDOS, which is a lot of work for a bronze trophy. I do wish they included a few more trophies in these games, but this is due to the limit on total trophy count for a game that is very heavy on its DLC offerings (since each table is considered one DLC release).

I love me some Portal and was excited to finally get to play Portal Pinball. It didn’t disappoint me, as I enjoyed taking on a new adventure to stop GLaDOS and hopefully help Chell get to freedom. With a unique board setup, a great theme, and excellent production values, this pinball table is worth your time.

This review is based on a copy of Zen Pinball 2 – Portal ® Pinball provided by Zen Studios.

I am Bread announced for PS4