A new game from the makers of Pixel Junk Monsters is now available on PS4, with a really unique genre-bending mechanic with soup-making at its core. Is it tasty or should we say “No Soup For You!”?

Welcome to Soup Co., Astroworker! After crash-landing on an alien planet, explore the environment, create huge factories and ship delicious batches of soup into space to earn gold for weapons, vehicles and more!

• Build and grow your soup factory to stay ahead of rival companies
• Harvest indigenous plant life and enemies for ingredients
• Unlock new robots to automate and increase production
• Build towers and missile turrets to defend your base from enemies
• Earn rewards by racing, defending, collecting and fighting in Galactic Challenges
• 2 player split screen / 4 player online drop in and out co-op

Nom Nom Galaxy is a new game from the creators of Pixel Junk Monsters and Pixel Junk Shooter. It’s a game with traits borrowed from many games that combine into one weird but decent tasting soup. Why Soup? Your goal is to explore different world building soup factories and ship soup to the universe and win the market share from the other evil soup producing companies. Really.

The game takes mechanics from different games to create an interesting broth. It has the world and exploration of a game like Terraria, the soup factory mechanics from a building SIM, the resource management of Don’t Starve, and a sloppy but interesting combat system. While it doesn’t do these things as well as the previously mentioned games, it does create a unique blend overall that makes it unique and different game. 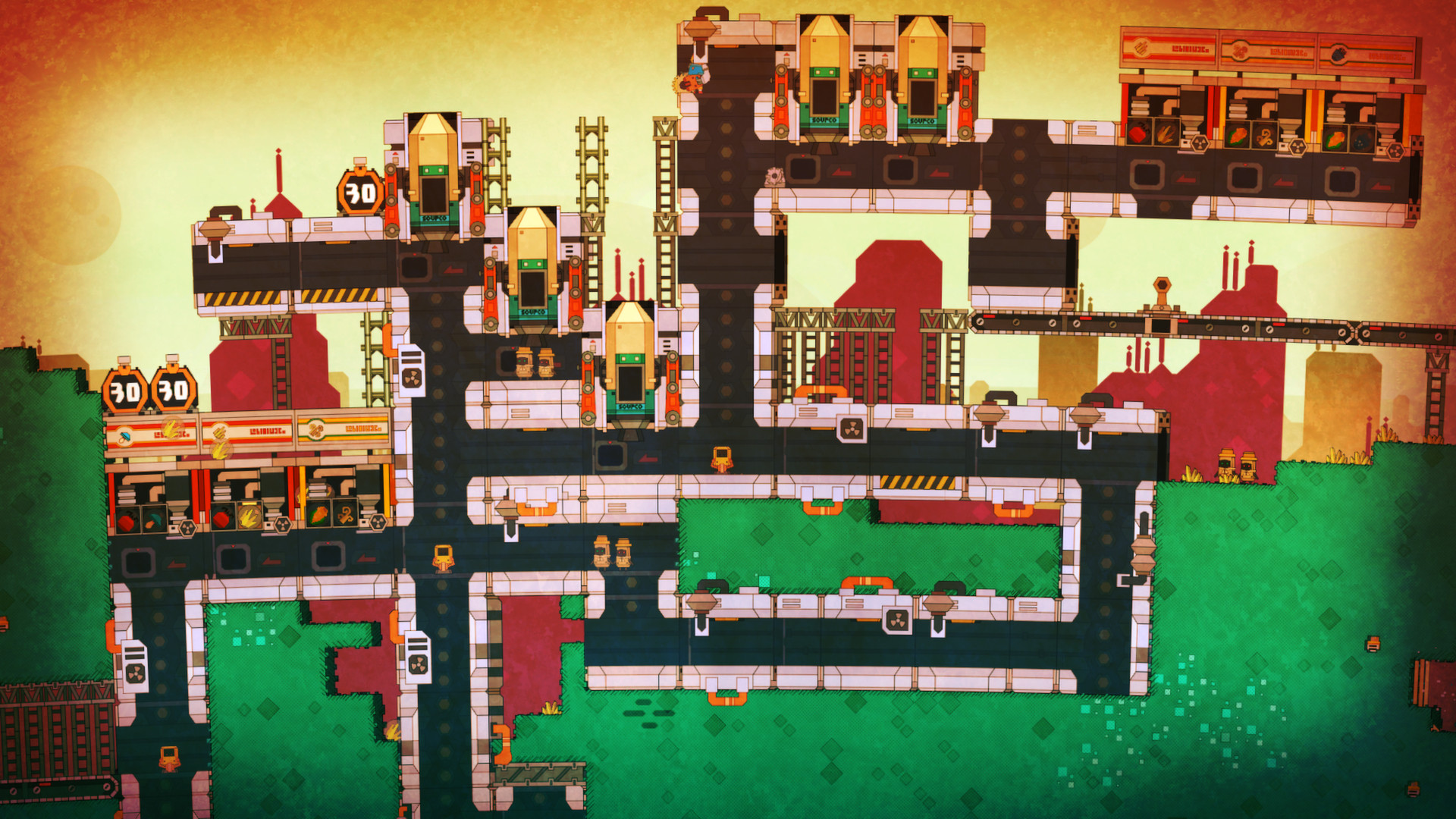 The game starts you with training simulations to really ease you into its world. You intentionally start by Traversing the world is interesting as you are often mowing through the terrain with a buzz saw to get to your next targets and goals. Soon you arrive at the soup factory where the simulation aspects come in. You must build different soup factories with the goal of producing different types of soup with ingredients from the world. Some of these factories can get downright massive and complicated, so you have to have a good eye for things.

If you are doing a good job producing soup, then you might anger the other rival soup companies, and they will then come and attack you. You need to arm your factory to prevent them fro, succeeding and you should also help in the destruction of the enemy forces. You’ll also find indigenous wild life on the planet that can be killed and added as ingredients to your soup. The combat from the game happens to be the most frustrating part of a game that does everything else right. 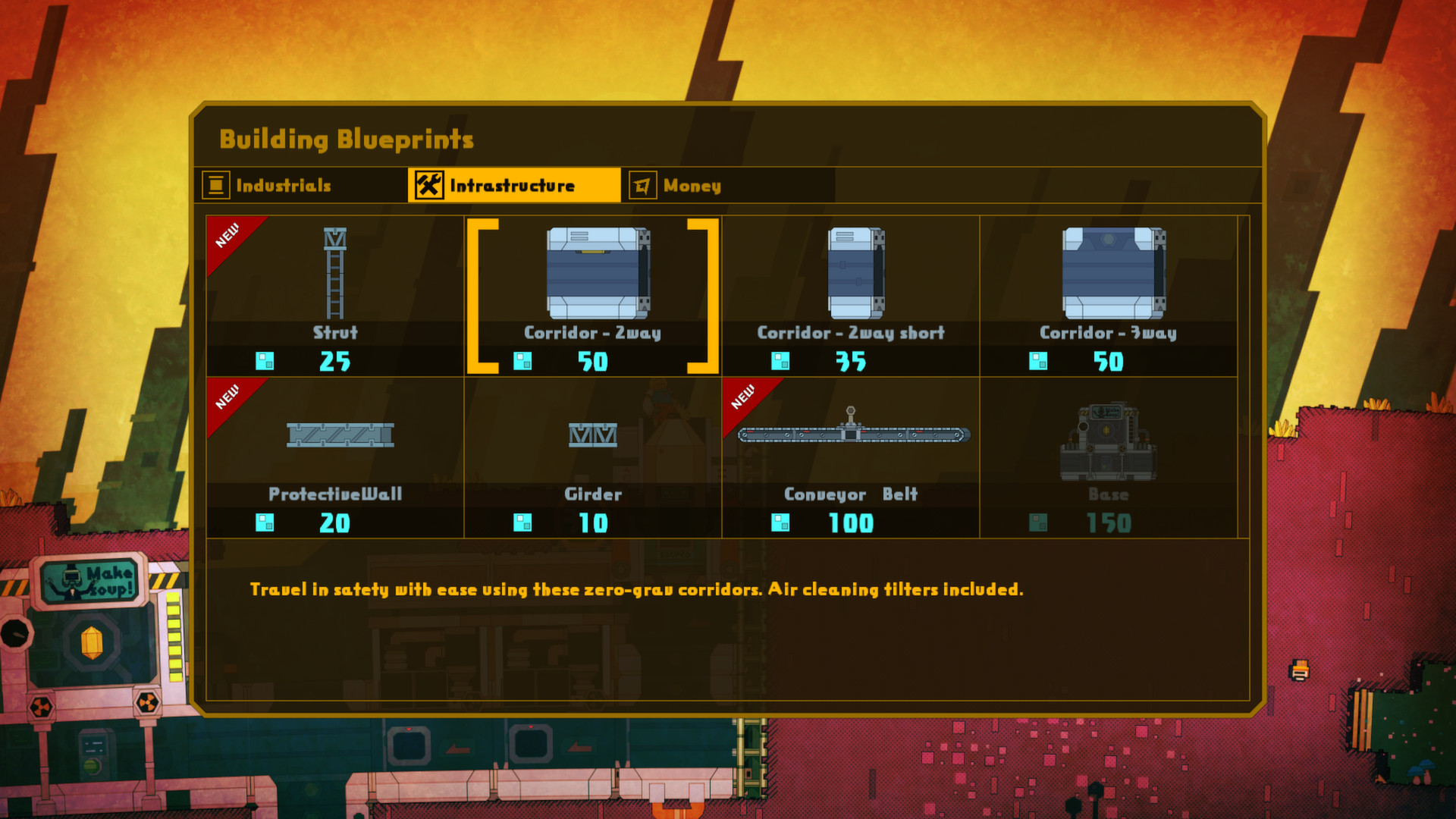 The game is super funny and interesting. You are in a battle for intergalactic supremacy of Soup. Obviously the game has a unique take on this world. You are employed by Soup Co., and you are consistently being dropped off on planets to create and deliver soup to the galaxy.

The game has great dialog and it made me smile a lot while playing thanks to its unique sense of humour. The game’s visual style is also really good, looking like a bit of the old 8/16-bit games, but with huge worlds that those systems could have never done. It uses pixel art in a clever way, creating really cool visuals and unique worlds.

The game has 32 trophies in total, including a platinum trophy, along with 5 Gold and 14 Silver, which is a pretty awesome mix. Getting some of them will be tricky since you’ll need to enter a “Zen” state of mind to be that good. It’s an interesting challenge that I think some hardened trophy master might want to take on.

I liked what Nom Nom Galaxy had to offer. It’s charming with it’s excellent sense of humor, and offers some really interesting gameplay mechanics. Combat is still something that does not work that great, but there are so many other things that work great that it balances things out. It’s worth taking a sip of this one and seeing how you think it tastes.