This is a double review for Hyperdimension Neptunia U: Action Unleashed on the Vita by EdEN and Ceidz. This review presents what they both had to say.

Hyperdimension Neptunia U: Action Unleashed is a new RPG set in the Hyperdimension Neptunia universe, but that separates itself from the Re; Birth games that we have been getting in the last months. You see, Action Unleashed is an action-RPG (and not a turn-based RPG like the Re; Birth series), that follows the CPUs (from Re;Birth 1) and their sisters – the CPU Candidates (from Re;Birth 2). This time around the main objective is to clear missions that are either about killing a set number of enemies (or a specific boss) or recovering items in a zone, spiced up in between with several cutscenes with a ton of dialog. 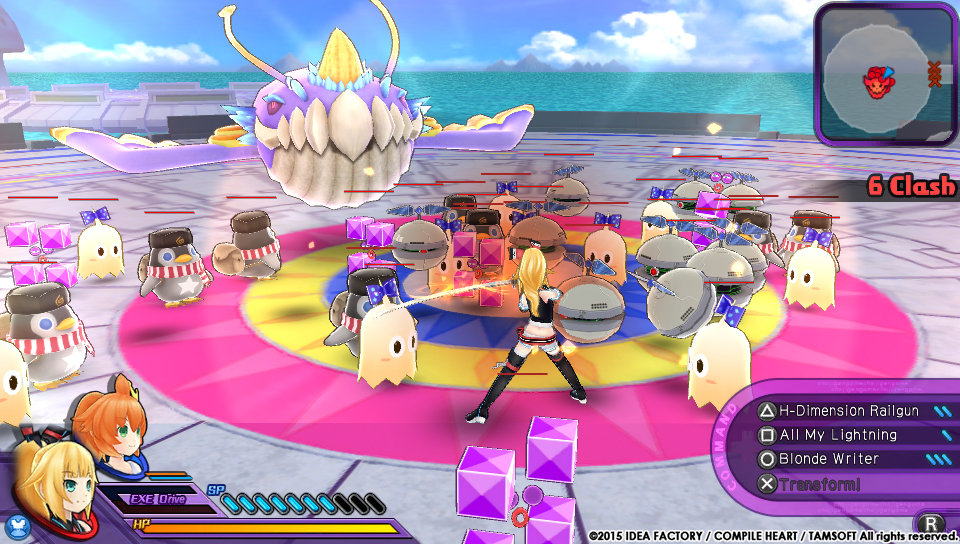 Each mission asks you to choose two playable characters out of the 10 available for players (the 4 CPUs, the 4 CPU Candidates, and 2 other characters introduced early in the game), and each level is filled by a TON of spawning enemies (many missions require you to kill 500+ enemies!). The gameplay seemed basic at first, but then I noticed that EACH character has a different attack combo tree (pictured below)! The typical gameplay, however, results in button mashing because the enemies have (in my opinion) too much health, which in turn makes the game a bit grindy after the halfway point. When you’ve used your character enough on a mission, she’ll unlock her special HDD powers (basically their limit break) which helps to reduce the enemy numbers, but it usually didn’t last very long and then I resorted back to the default underpowered attacking mode. 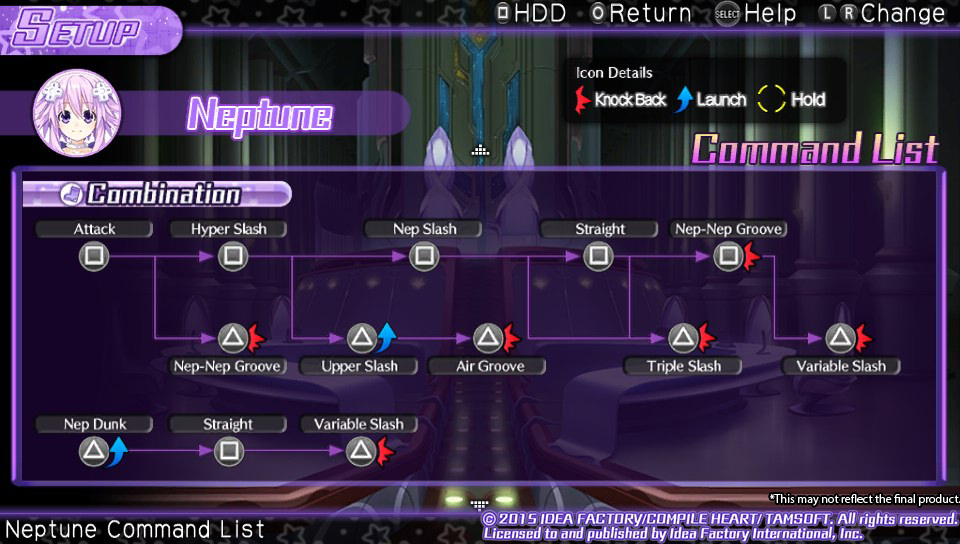 As you all know, I LOVE the Hyperdimension Neptunia series, so I was thrilled to see that they would try something new set in the same universe. Of course, the great dialog and fun humor are still there, and there’s a ton of geeky jokes (pictured below) that those not familiar with the industry might not catch at first. The game also features a lot of fan-service as the costumes the characters wear can be torn a bit, and when that happens, the heroines fight in their underwear. The main heroines even joke about that very early in the game, asking the game developers why they’re doing this to them when they had said before they wouldn’t “cross that line.” 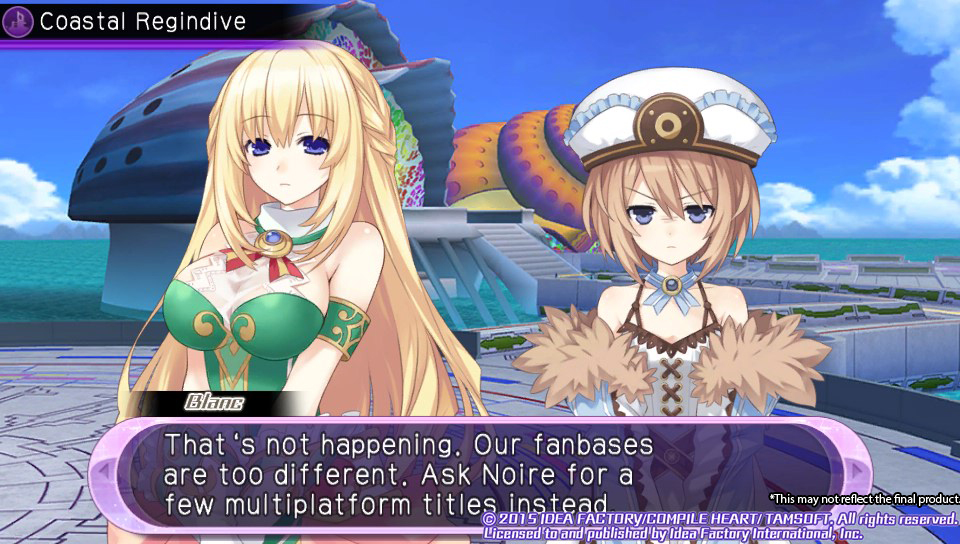 I noticed that practically all of the enemies, bosses, environments and soundtrack came from earlier Hyperdimension Neptunia games. I didn’t care that much since the scope of this game is different, and it made sense to revisit old environments, but I wanted to mention it anyway. To be honest, I actually like the songs in the soundtrack, so I was glad to see them come back!

This might also be the easiest trophy list for a Hyperdimension Neptunia game yet, since all it takes is a lot of time and effort on players part, but so far other than MAYBE a couple of trophies, there are no missable trophies in the game. As long as you complete every quest in the game and don’t skip a single event, and mix and match characters to raise their Lily Rank, you’re good to go.

Finally, the performance on the Vita was top-notch with a stable frame rate even when a ton of monsters were visible on the screen. 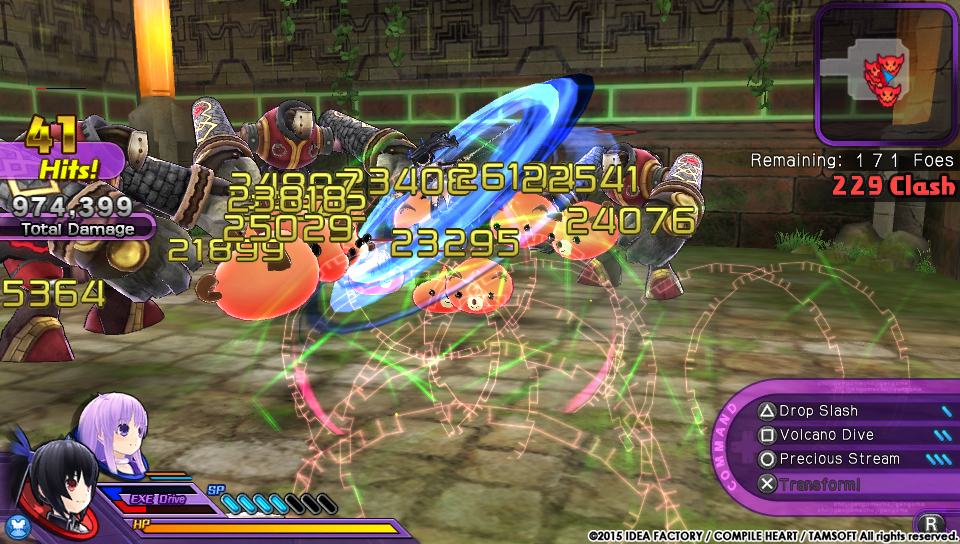 Final Thoughts
Hyperdimension Neptunia U: Action Unleashed is a new take on the Hyperdimension Neptunia franchise. It was fun to play out, but quickly became grindy due to the count of enemies. We liked the environments and overall setup of the game but think this game might have a niche audience due to the mentioned setup (a side-story to Neptunia’s universe), repetitiveness and fan-service.

Still, if you’re a fan of the Hyperdimension Neptunia universe, you should definitely buy this game since you’ll enjoy the interactions between all the characters as well as the solid gameplay.

You can purchase Hyperdimension Neptunia U: Action Unleashed from the PSN.

Fun, but repetitive and grindy

Disclaimer
This review is based on Vita digital copies provided by Idea Factory International.