Teslagrad is the first, and so far only game from indie studio Rain Games. Players take on the role of the last Teslamancer in his quest to reveal the injustice that has caused him to be the last of his kind. The opening scenes of Teslagrad gives players a bit of backstory about the un-named Teslamancer, leaving a trail of unanswered questions… Check our Teslagrad review for more about this title!

Teslagrad is a non-linear 2.5D puzzle platformer with a steampunk vibe and an exploration element. I must warn you: the puzzles are fiendish. But they’re also very satisfying when, after countless retries, you finally conquer a puzzle! The game has an interesting physics mechanic that allows the Teslamancer to repel (red) objects and attract (blue) objects. The puzzles you are faced with might have a solution that should be obvious, but executing said solution is when things can get tricky. It is all about trial and error.

The boss fights are not your average standard button-mashing kind of fights, that would be too easy. Teslagrad is a hard game, so you are going to defeat these bosses the hard way! These fights will feature clever puzzles, so you need to think to defeat these beasts. Each boss has three stages before they can be defeated, so you have to study them and figure out the solution. The downside is that all bosses can take you out with just ONE HIT! This obviously adds to the difficulty, forcing players to think and plan wisely. Throughout the game, you’ll find several collectibles in the form of scrolls. These are cleverly hidden and players are not going to find them very easily without exploring every corner of a room… or with outside help such as walkthroughs or youtube videos. Teslagrad has 100+ rooms for you to enjoy its gorgeous hand-drawn puzzle-ridden locations that are begging to be explored. The best thing about the game is there is no loading screens or framerate drops, making gameplay silky smooth from start to finish. The tower itself look’s very Castlevania-ish, and it is HUGE! Apart from the puzzles, one other important aspect of the game is exploration, Players are free to go back and forth and search for scrolls without restrictions. The only thing to consider is that if you want to go back into rooms you’ve already visited you’ll have to repeat that room’s puzzle again! Yes, players do not get off that easily! On a normal playthrough, the length of the game can vary between 8-12 hours, but this game definitely has speedrun potential if you don’t go searching for every scroll. I have heard players managing to complete the full game in just an hour! Are you one of those players?

Teslagrad has 37 trophies for you to hunt including a shiny Platinum. The trophy list is very unusual because all trophies are unlocked by finding collectibles. Therefore, if you can find all 36 scrolls, you will earn yourself a Platinum after obtaining all the 24 Bronze, 8 Silver, and 4 Gold trophies before it. 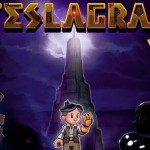