Yorbie Episode 1: Payback’s a Bolt is an action game that resembles Ratchet & Clank: All 4 One, the four player co-op Ratchet game that released on PS3 a few years ago. How does Yorbie stands on its own?

Take note that while the game’s title states “Episode 1,” the studio stresses that “This release is NOT an episodic release but a full game“.

These are dark times in the 18 colonies of the Yorbie Collective. The evil Dr. Zox has infiltrated Yorbia Prime, banishing the supposedly all-powerful Guardians while enslaving the remaining inhabitants. The future of bot-kind now rests on the shoulders of Yorbie, an unlikely hero who was once shunned for his wild antics and disobedience of authority. Armed with nothing but his half-cocked wit and a hell of a lot of firepower, Yorbie is going to get some payback…

Go it alone or team up for local multiplayer with up to 4 players for even more competitive action. Play as Yorbie™ or as the bad guys.

The evil Dr. Zox took control of all the robots and enslaved them. You are Yorbie, the only robot that didn’t fall into his hands, and you’re up to get revenge and recover your friends. Like I said earlier, the gameplay of Yorbie is very similar to Ratchet & Clank: All 4 One.


The first thing that I noticed right from the start is how floaty the controls were. Yorbie is controlled by moving the left analog stick, and jumping is done by pressing X but isn’t as responsive as I was expecting. Instead of being a twin stick shooter, pressing the right analog aims but doesn’t shoot. I eventually needed to resort to the in-game help to figure out that shooting is done by pressing the R2 trigger. 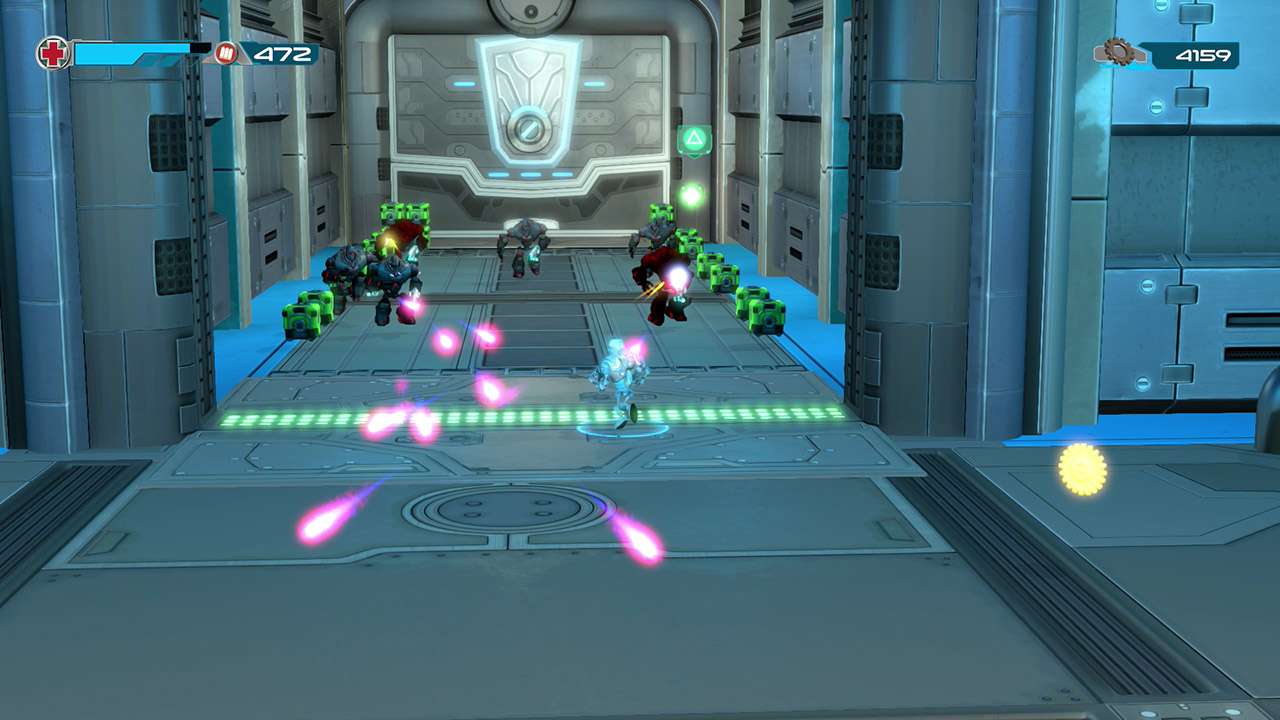 As far as the gameplay goes, it is overall pretty generic: it consists in moving from zone to zone, destroying all the enemy robots, and you then flick some switches, destroy some more enemies, go to the next zone, and repeat. There are five stages to complete, and I completed all of them in around 2 hours, which is a little shorter than a typical Telltale Games episode, which usually lasts around a bit OVER 2 hours.

One of the most annoying things I found in this game was the money collecting mechanic. Like in a Ratchet games, the money (cogs in Yorbie) is stuck in crates that must be destroyed to recover it. The thing is, your punch only breaks a few crates at the time (Ratchet’s ratchet would break a ton of crates at the same time), and money isn’t automatically attracted back to you – each cog in the game must be individually collected. Without exaggeration, I’m pretty sure that I could have finished the game 20 minutes earlier if it weren’t for the painful individual cog collection.


Collecting money in this game allows you to upgrade your weaponry, as there are six different weapons in your arsenal. Even upgraded, a few guns react strangely and feel unfinished. For instance, I would’ve expected that when the Pipe Bomb is thrown, it will explode on enemies, but it passes right through them and stops at a wall far behind them, or falls from a ledge. Some guns have an overheating mechanism in which you must use them lightly or they’ll become unusable for a few seconds. Since the game sends wave after wave of enemies, having a gun that overheats is more an annoyance than a cool feature. 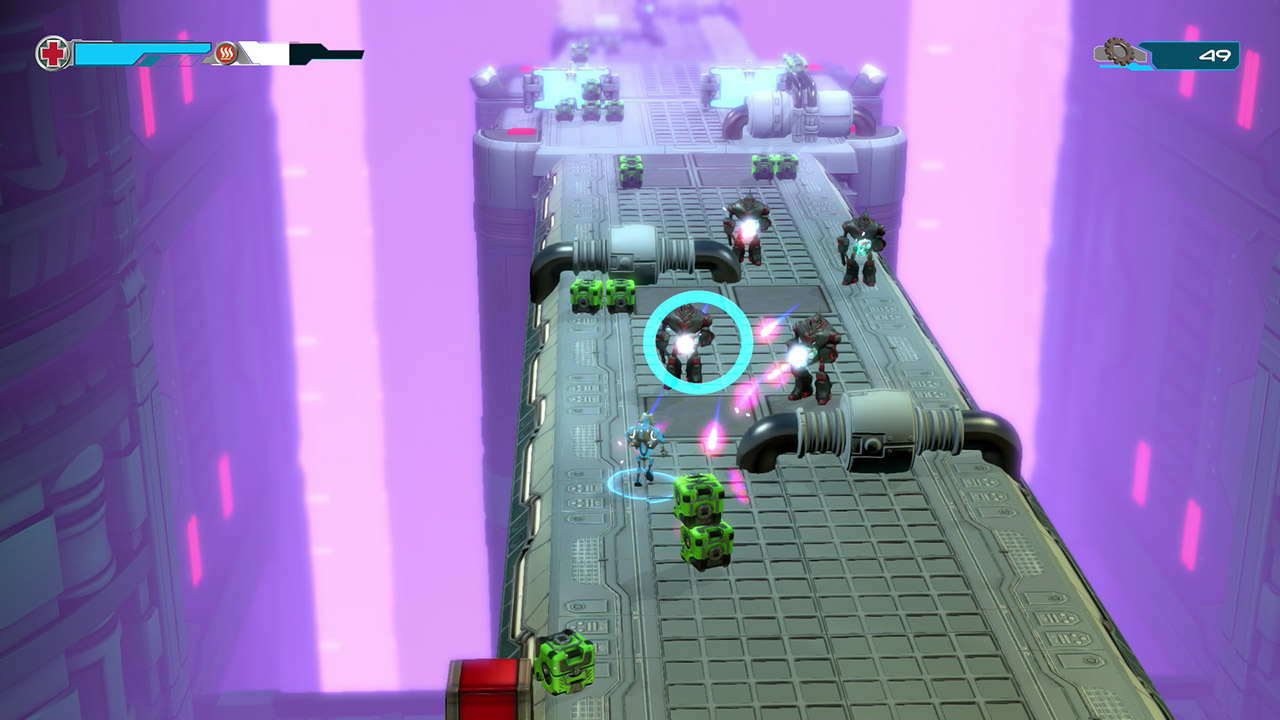 While playing Yorbie, expect to die more than a few times. For starters, it doesn’t have invisible walls next to ledges so you can fall to your death. Being fair, you can also fall from platforms in a typical Ratchet & Clank game, but since the controls in Yorbie aren’t as crisp, it often felt unfair. Enemies will also often spawn up right in front of you and will attack immediately – those surprise attacks will also yield to deaths. There are some defensive walls that were designed for you to take cover while being attacked, but you will take damage anyway if you are too close to those walls.

Finally, the last stages go into precision platforming mode in which you must jump from disappearing platforms to another, and those sections were a platforming hell thanks to the camera and the weird controls. Some of those sections also added spawning enemies that had to be taken care of while navigating from platform to platform! COME ON…


On to the good points of the game I noticed that the game sends some sounds effects to the controller. I thought this was a great and innovative idea and was well implemented. The four player co-op is also a good idea, but given the controls scheme and the overall feeling, I didn’t want to invite my friends over to play this game with me.

Because I love my Vita, I tried to play this game on the go with me, but since shooting is done with the R2 trigger, it totally isn’t playable in Remote Play without changing the default configuration (on the Vita, R2 is mapped to the upper right corner of the front touch screen). Like I mentioned, this game could totally have been a dual-stick shooter and would have been greatly better with only that small feature.

You can purchase Yorbie Episode 1: Payback’s a Bolt from the PSN.


This review is based on a PS4 digital copy provided by Happy Dance Games. 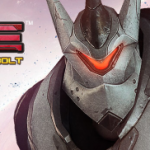 Red Goddess In Development For PS4