Paperbound is a new arena local multiplayer release out on PS4. Is this your new PS4 party game or will it end up on your shelf collecting dust like some of the old books used in the game? Let’s find out!

Paperbound is a smash-up brawler from the mind of a former Call of Duty: Advanced Warfare developer that combines platforming, twitchy combat, and gravity redirection in a competitive couch multiplayer setting. Experience 360 degrees of gravitational freedom as 1-4 players run with scissors, walk on walls, and lob ink bombs in whimsical-yet-intense battles within the pages of old books. Local multiplayer only.

Play as one of Paperbound’s 11 original characters or as characters from Guacamelee, Monaco, VVVVVV, Cards and Castles, or Tumblestone.

Paperbound features challenging AI bots that adapt to your skill level. Each character has his or her own personality. The bots are great for solo players or just for extra chaos.

Fight in arenas from classics including…

Compete in a variety of free-for-all and team game modes:

Paperbound is a new entry to what seems to be an ever-growing genre of local-only multiplayer combat games – Towerfall Accession came out on the PS4 last year with a very similar theme and structure.

The game takes place in the pages of several ancient books including Journey to the Center of the Earth and Dante’s Inferno. It’s a really interesting concept that hasn’t been done before. You can choose from one of the 11 original characters and a few guest characters from other indie titles. (Juan from Guacamelee says Hello!!) You pick your character and are dropped straight in the battlefield. Each page from the book looks different and gives you a unique arena to explore. Each character does control the same, so your pick is more about how you want to appear as you fight. 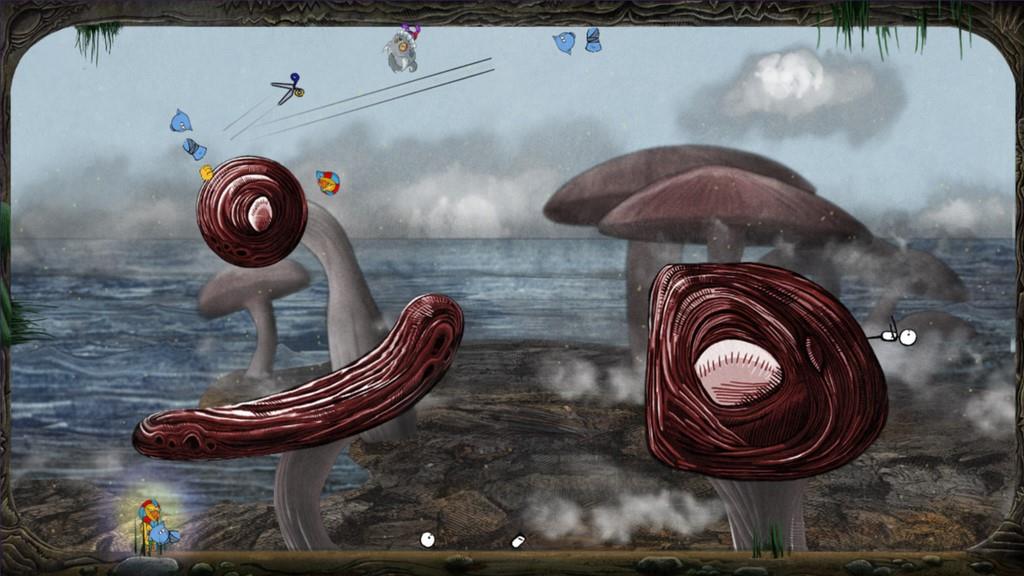 In the arena, your character can attack other characters in few different fashions. It has your basic melee attacks when close to another character; you can throw a pair of scissors using your right stick for aiming, and you can throw an inkblot that is harder to do but could take out multiple characters at once. This sounds very simple, but it does complicate the formula a bit. You only get one pair of scissors to throw, and when you throw them you have to go collect them on the battlefield to use them again, also a perfectly timed melee attack will deflect them back towards you often killing your character. It offers some good risk reward to your playing style.

The other really cool mechanic in the game is controlling the gravity. When you press triangle, your character flies in the opposite direction. So if you are standing you fly with your ceiling to the roof and if you are the right wall you fly to the left wall. And when playing in high-stakes battles with other players using this masterfully to dodge their incoming attacks, and setting yourself up to dish some really cool kills on your friends, that is when the game clicks with you. I loved doing that, and it made recapturing the scissors even easier. On Default most games go to 10 kills. However, once you get ten kills, you have to have your character escape through a tear to win the game. If you die before getting there, you have to get another kill to make the tear open. This adds some strategy to the end of each round as you want to make sure you escape. 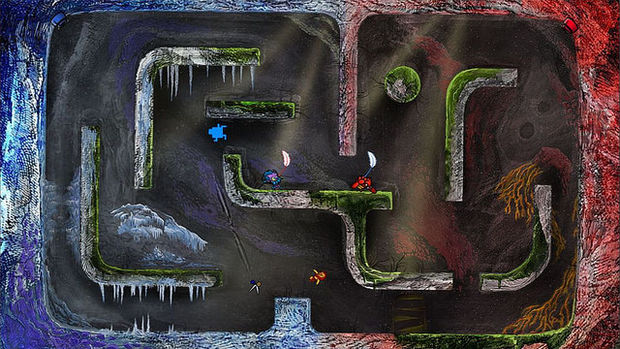 This brings us to where Paperbound doesn’t work. It only offers local multiplayer, so to enjoy the game you need three people there with you on the couch. Unfortunately for some of us that is not the easiest task. You can Shareplay on the PS4, but that only lets you share with one other individual creating only a two player match-up. Similar to my thoughts on Towerfall, I believe these games need an online component to help you find opponents and play them to their full capabilities. There are AI controlled bots that are supposed to learn your play style, but they still don’t recapture the glory of playing with a few friends.

Paperbound was a super fun game when I had friends over. It was very much a one more match mentality as we couldn’t put it down. When I was on my own playing with bots, it was not the same experience. Not bad per se, just not as fun. If you have a good group of core people to have over, then you should have this game as I’m guessing you could enjoy it as much as I do. At $9.99 this is a steal and a must try for your upcoming parties.

This review is based on a copy of Paperbound provided by Dissident Logic LLC. 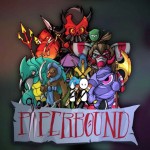 Sketchcross Is Out Today on Vita!

Adventure Time: Finn and Jake Investigations Is Coming To PS4!