Paparazzi is a multiplayer game from Indie developer Pringo Dingo Games that got Kickstarted last summer, and got funded by a very small margin. Is this game any fun? Read below to find out!

Paparazzi is a 2 player game of cat-and-mouse. The celebrity runs, dashes, and hides while the paparazzi tries to take constant photos of them. It’s a simple yet competitive arcade-action game! It’s a test of focus and reflexes and a silly take on celebrity culture.

Paparazzi is one of the simplest games I’ve played in a while. In short, this game is a couch-multiplayer experience in which you can either play as a Celebrity or a Paparazzi. As the celebrity, you must hide through each level in order to protect your dignity. And, as you can guess, being a paparazzi means you must take as many pictures of the celebrity as possible in order to raise your total money (those stats are in the upper section of the screen). There is also an alternative mode in which this game can be played in Single Player, where the other character will be automatically controlled by the AI.

There are many levels and celebrities available to choose from at the beginning of each play session and as soon as those are selected, you must be quick to hide yourself (celebrity) or to capture the celebrity as he/she/it moves around on the screen (paparazzi). The levels auto-advances in a side-scrolling fashion and the game ends once the celebrity reaches his car on the right. Each level only lasts for a couple of minutes, making this a fast-paced game. 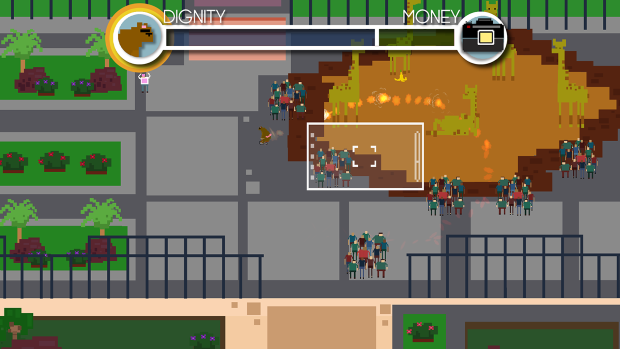 As a guy who loves retro-gaming, I must admit that I was charmed by the 8-bits-esque art-style of the game. The movements are fluid, but the gameplay is a bit messy since at first I was inclined to mashing the buttons to take as many pictures as I could… which then showed me there is a bit more of depth to the game because taking pictures of anything but the celebrity will make the paparazzi lose money. I played with a friend in the local competition mode, and while we had fun at first, the game started to fell a tad redundant, so we changed roles and played on other maps to keep things fresh. We did have fun again, but in Paparazzi, the novelty and fun factor doesn’t last as long as you’d think.

On the bright side, this game contains 12 very easy trophies that can be achieved in a couple of hours, and the price of the game is low so you can still try it without investing a ton of money… which is a great formula for you fellow trophy hunters! 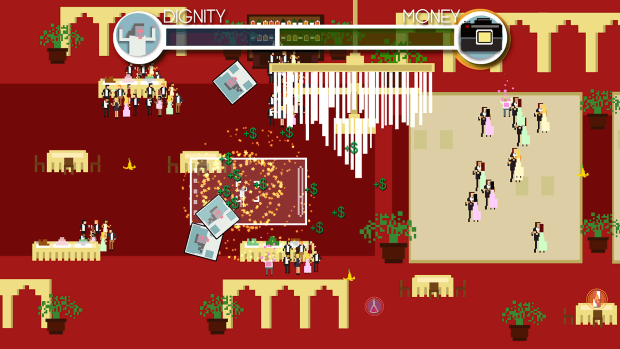 You can purchase Paparazzi from the PSN.


This review is based on a PS4 digital copy provided by Pringo Dingo Games. 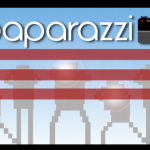