Do you enjoy arcade shooters? Do you like kitten? Do you like underwater adventures? Is milk something you treasure? Then have I got a game for you!

Due to a sudden shortage of milk, cats around the world are forced to seek out new sources to get their fix. You and your team of milk mining kittens have overcome a fear of water to drill down under the ocean seabed and begin extracting vast reserves of what seems to be naturally forming full-fat milk. Get ready for fast paced submarine action, defending the kittens from disruptive mechanical sea creatures. The milk must flow!

Aqua Kitty is a very fun shooter where players only need to worry about two things: shooting everything that moves, and making sure that the poor, poor kitten working on extracting milk from the ocean floor are not abducted by the evil aliens… who are evil. 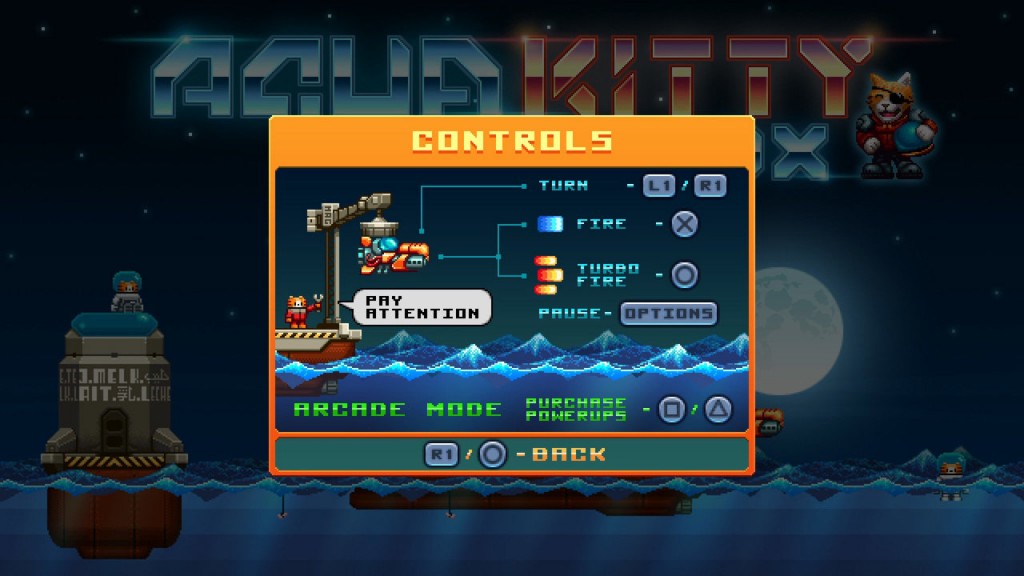 Controls are very easy to learn. Players can shoot left and right, either with their regular attack or with a turbo attack which can be used as long as the special attack bar has some charge (don’t worry, it auto-refills while you’re not using it). Players can also have access to power-ups dropped by special shiny ships once they’re destroyed, and these can let you shoot ahead and behind of you, give you a spread shot, or a pair of smaller ships that will triple your firepower. These will last as long as the weapon bar is active, and they’re a must for reaching a high score that will let you enter the leaderboard for the level.

Each level is short and sweet, keeping players active and engaged, always busy and never bored. Enemies attack in waves, thus letting players prepare for the onslaught. I suggested that you stay close to the miners between waves because the aliens that abduct them tend to spawn extremely close to them, making it harder for you to rescue the miners before it’s too late. And yes, there is a trophy for rescuing all miners in the game, so be sure to always keep miners safe!

Levels are available in sets, and the final level of a set is always a boss fight. These will test your skills because juggling one final wave of enemies along with a huge boss, all while miners are being abducted, requires a big effort from players. 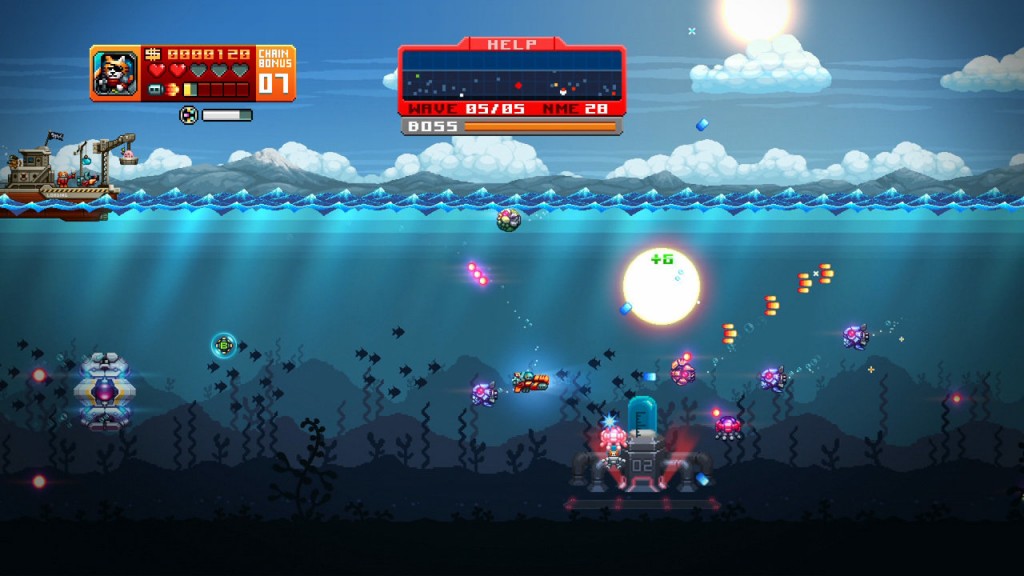 On the bright side, you have a mini-map available which will let you know where enemies are, and it will also turn red when one of the miners is in danger. Also, when playing on PS4, the controller’s light will change color as well, and I found this to be extremely helpful.

On top of the regular story mode, Aqua Kitty features another two game modes that will triple your fun! First up we have Infinite Espresso, a mode where players will battle an infinite onslaught of enemies which will come at you wave after wave after wave until you’re dead. There’s two trophies tied to this mode (one for making it to wave 10, and another one for making it to wave 20), and after wave 8 things get crazy hard and extremely ridiculous, making every wave after that a bullet hell shooter. 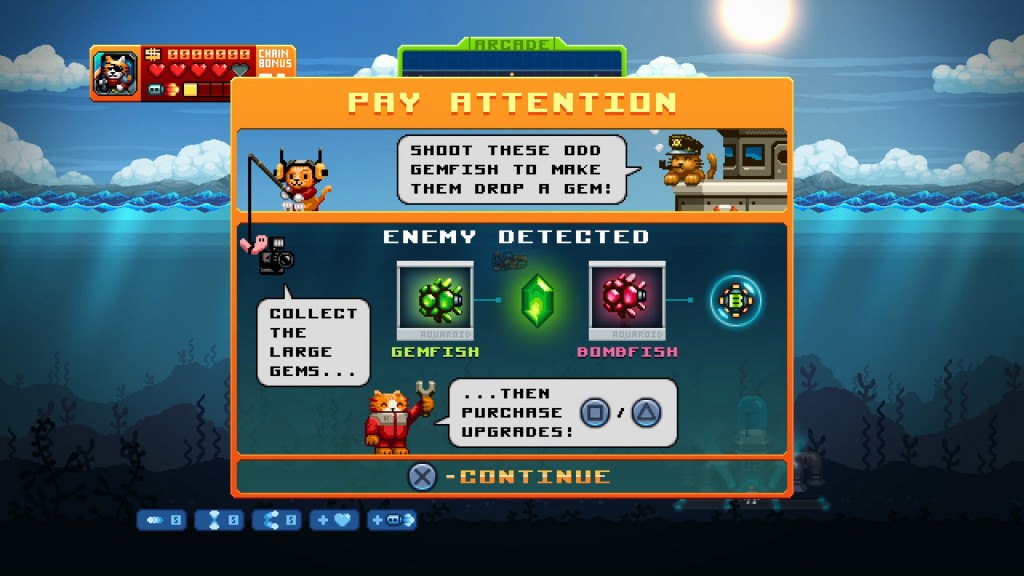 The second one is Arcade mode, where most rules remain the same, but with a twist. Instead of obtaining limited power-ups, some of the enemies will yield crystals which can be used to purchase power-ups or extra health points (similar to Gradius), and these are yours to keep… until you die. And once you’re dead, it’s game over. That’s right, all of your progress in Arcade mode is reset once you’re dead, and this makes one of the trophies extremely hard to get (rescuing all miners in Arcade Mode). 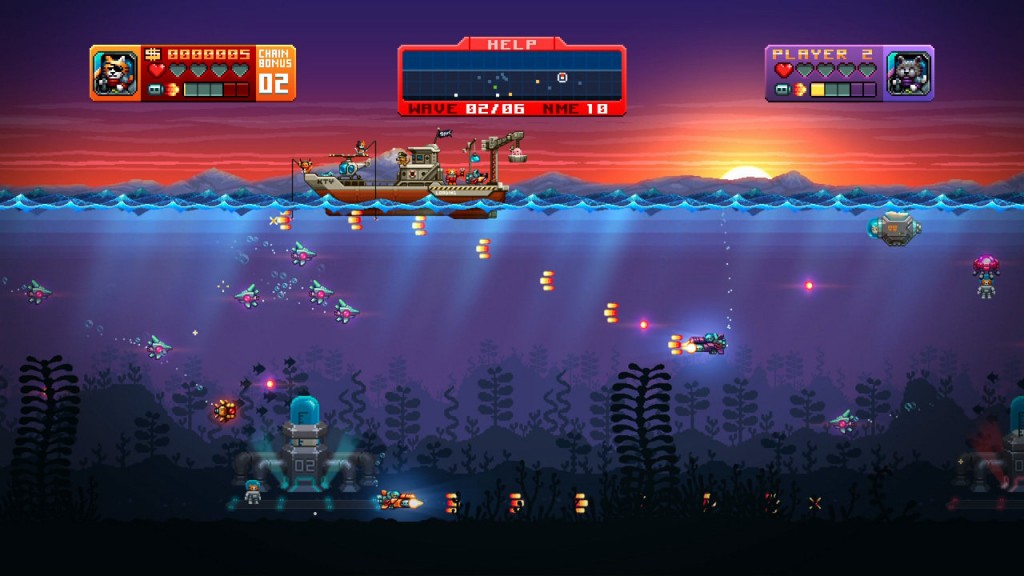 Aqua Kitty is an excellent arcade shooter with a great soundtrack that will keep players coming back for more for hours. The tight controls and simple gameplay mechanics make this an easy game to recommend. Having three game modes and online leaderboards for every level definitely increases the game’s replay value, and the fact that the game is Cross-Buy and Cross-Save between Vita and PS4 is a huge plus. 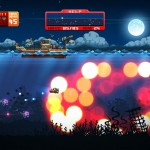