I had a lot of fun with Trine 2: The Complete Story when I played it for review, so I was definitely up for playing Trine: Enchanted Edition so that I could let you know what to expect from this new version of Trine.

Trine Enchanted Edition is the origin story for the three unlikely heroes of Trine – Amadeus the Wizard, Pontius the Knight, and Zoya the Thief. Spellbound by the magical object Trine, the heroes must join forces to overcome obstacles and puzzles in a fully interactive physics-based world, battle the undead and their minions, and restore balance to the kingdom!

– Origin story for the 3 heroes – Amadeus the Wizard, Pontius the Knight, and Zoya the Thief, each with their own skills and unique abilities

– Solve challenges and puzzles in many different ways by combining the characters’ abilities, and come up with creative solutions never seen before!

– Online and local co-op multiplayer for up to three players

Trine: Enchanted Edition is a remake of the first Trine game which was released back in 2009. This version was developed by using the engine from Trine 2 (that, like I said, also had a PS4 remake). The game takes fantasy storytelling in a new direction. If you haven’t played it before, this is what I like to call a puzzle side-scroller.

We are introduced to the heroes of the game very quickly as they are all attracted to a mystical device called the Trine. Amadeus the wizard, Zoya the thief, and Pontius the knight are bound together whether they like it or not via this mystical device. They are then, as in most fantasy style games, sent on a quest to save the world (even if they don’t know it right from the start)!

As mentioned earlier, the game is a 2-D side-scroller. You can access any of the three characters at any time, but only one of them can be active. Each has their own abilities, where the puzzling aspects come into the gameplay. The Wizard can create objects out of thin air, the thief can use her bow and grapple over large gaps, and the knight is your brute force tank-style character against the enemies in your path. You use the shoulder buttons to toggle between the characters in order to make the most of their skills as you see fit throughout the level in order to proceed. Often there are multiple ways for you to continue, and you can choose what mix of characters to use. Also, they each have their own separate life bars, so if one dies the others can still carry on until the next checkpoint where all life will be restored. It’s a really a cool system that rewards you for thinking outside the box and gives you the creativity to get through the level in your own way. 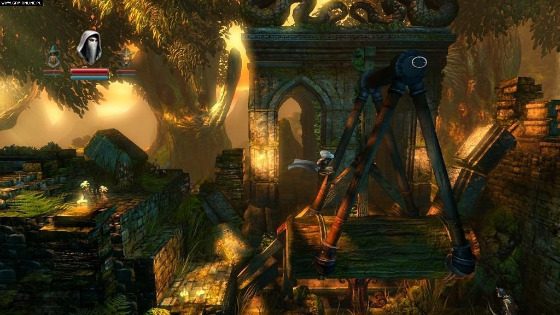 The game tells a similar story that you may be familiar with if you have played a fantasy game before, but it’s the characters themselves that make it different. All the voice work gives the characters a unique feel and makes them stand out. My favorite is the wizard, who instead of taking a Gandalf type disposition, seems to be a ladies man consistently trying to get the girl. It made me giggle a few times.

As you play through the game, you will get the options to upgrade your characters skills and abilities. Each level cointains green experience vials, and when you collect enough it will be time to level up! This gives your character access to extra unique abilities, thus making it easier to traverse the environment or combat the enemies. Only one character can be upgraded at a time, so you need to choose wisely where you would like to invest your efforts. You can also find armor and equip it to your characters to give them an advantage against the horde of monsters in the game. 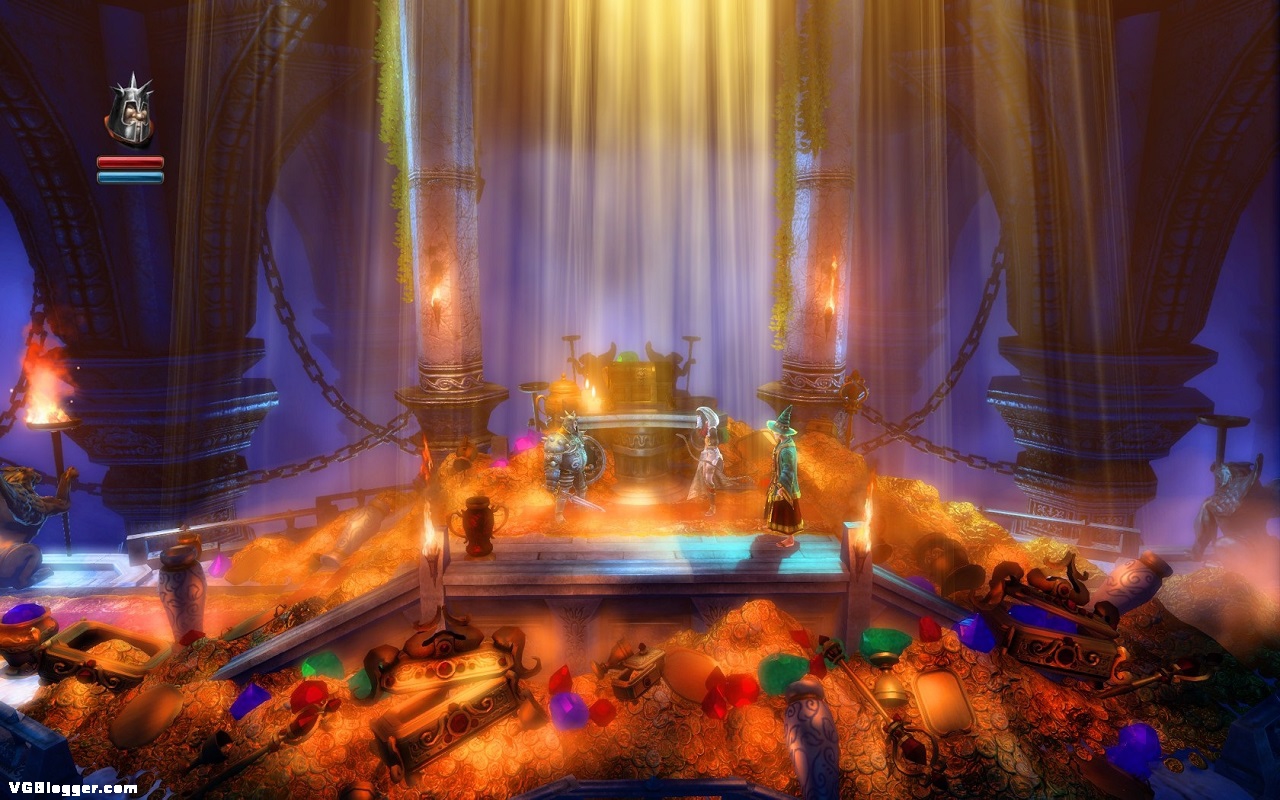 The game does try to make the most of the PS4 touchpad on the Dualshock 4 when using the wizard to help you create your items. I tried using, but I found it too small to draw the images to create the right objects I wanted. Maybe if the touchpad was just a bit larger it would be easier to draw what is needed since sometimes boxes must be conjured one after the other in mid-air!

As a whole I love the concept, but you are dropped into the game with not much help on how to play. I struggled a bit on getting through some of the areas, but I watched some other people play and saw the creativity like using the boxes your wizard can create as weapons, dropping them on enemies. This opened up new ways to play the game and would have been great if the game had mentioned it.

There is also a great multiplayer mode that supports online and local co-op so you and up to two friends can play and take down the enemies together. It adds a different feel to the game, but you are more focused on one character instead of switching back and forth, which takes some of the fun out of it.

The game looks good, and it should as it is using the Trine 2 engine. The characters look great on the screen, and all of the backgrounds look amazing. As mentioned earlier the voice work is great and makes the game a blast to play, keeping it humorous but on point. 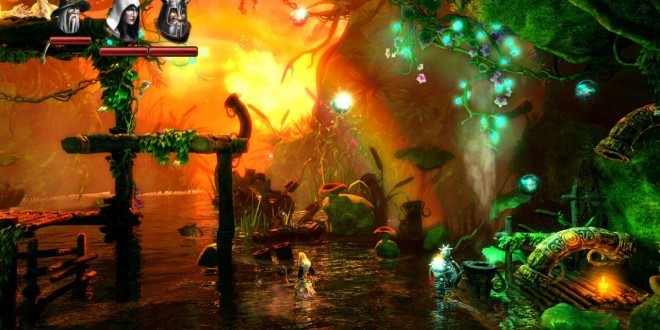 The game has a plethora of trophies, including a platinum one. There are 47 trophies total with four gold and four silver. You get one a bronze for beating each level, as well as for completing it with all items collected. There are a few other trophies, but nothing too hard to do except completing a “Hardcore” play through.

Overall Trine: Enchanted Edition was fun to play as it really bent the genre. If you haven’t played it then you should really give it a try. If you have then there isn’t enough new content to make it worth your while, unless you want to take another stroll down memory lane. I enjoyed my time with the game for the humor, the story and the tight mechanics and gameplay. Oh, and once you do finish this one don’t forget about Trine 2: Complete Story which was released last year. 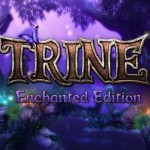