The PS4 has been infected with an alien symbiote. Now all it can say is “We are PS4 Venom!”

As Eddie Brock’s journalism career spiraled downward, he always blamed Spider-Man for his own failure. A symbiotic organism from an alien world sensed his rage, and having itself been rejected by Spidey before, shared his hatred of the web-head. Thus, the Symbiote chose Brock as its next host, and together they are – Venom.
Table features:
• Also on the table is Carnage, an offspring of the Venom symbiote that bonded with a maniac and a common enemy of Spider-Man and Venom. Is an alliance between the two arch-foes possible?
• Experience Carnage’s origins during Venom’s jailbreak in an exciting mini-game!
• Help Spidey teach Venom a lesson and exploit the Symbiote’s weaknesses!
• Relive Spidey’s black suit exploits with the Symbiote during multiball!
• Be wary of the sticky alien substance! Send that goo ball right back to Venom!
• Learn about the alien’s other hosts and collect their hurry-ups!

Zen Pinball has done it again transforming another great property into an excellent pinball table. This time they have taken on Spiderman’s greatest foe …. VENOM! They have done some great tables in the past for Marvel Comics, and this is no exception!

As with other previous Zen Pinball tables Zen Studios has taken a considerable amount of time in crafting this brand new table starring Venom. Upon loading the table you are greeted with Spider-Man and Venom fighting, and then the action begins. The table is loaded with Venom goodness all over it. The biggest noticeable thing that you would immediately see is that Carnage – another Symbiote – is being held captive below the table and is trying to escape. You can also see the torch to the statue of liberty in the top right corner and a clock tower bell in the top left corner. This table oozes Venom – literally sin the side of the pinball table features the Venom Ooze itself. This release does a great job of bringing you into the Spider-Man universe. 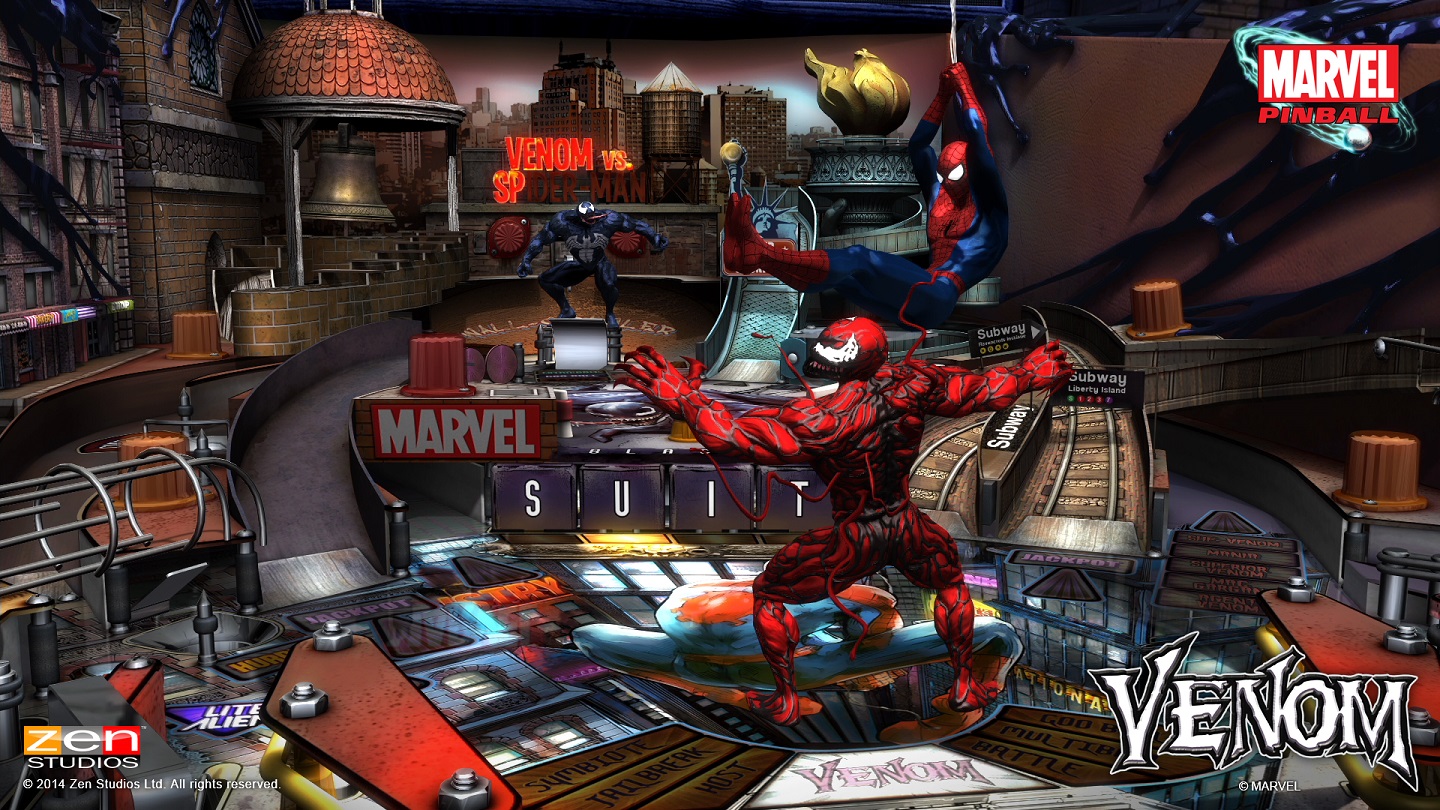 As you play the table you will notice that when the ball is launched it doesn’t go into the top of the table. Instead, it enters on the bottom half. You will spend most of you time in the lower half of the table, but when you get the ball to the upper half you will have flippers up there as well to keep the action going. It’s a cool setup and different from other pinball tables I have played on in the past.

There is also a great mini table included that you can enter. You will be transported to a prison where you need to hit all of the letters of JAILBREAK to get free. It’s tougher than you would think since the ones on the side are hard to hit.

Zen Pinball 2: Venom brings that unique flair from the comics, converting it into a cool pinball table. Zen Studios nailed the decor and set pieces properly, really giving you that feel, while still being a great design for the pinball table itself. They also got the voices right. As you play you will hear great renditions of Venom, Spider-Man and Carnage. 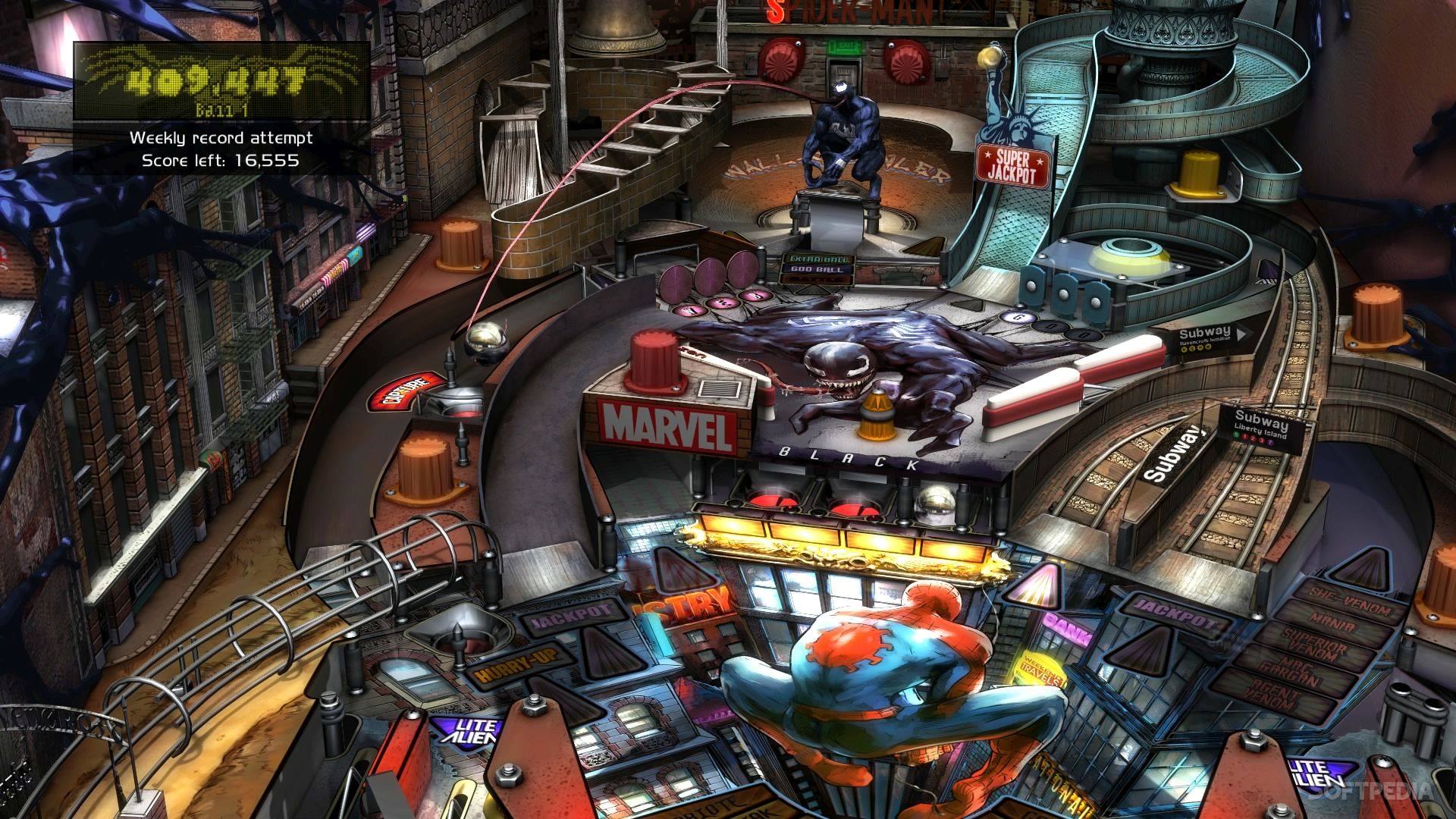 As per usual, there are two more bronze trophies for you to collect. They are difficult to collect, with one involving starting a battle with Venom and the other is when all modes have been completed, and you have taken on Maximum Carnage. Definitely doable with some good practice, but a nice challenge overall for even the most skilled players.

I really did have a good time playing the Venom Pinball table. While I’m typically more of a DC Comics guy, I enjoyed the allusions to Venom throughout the years that I have seen in the media. It’s a character that has changed a lot since its debut in the early nineties, and this release has managed to put that fan service into the table. Venom fans will find a lot to like about the table, and pinball fans in general will enjoy it as well. 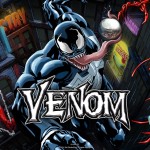