Possibly the greatest game ever made is now available on PS4 in it’s Ultimate edition. But is it Ultimate or Ulti-not?

In this fast-paced game of skills, you can take on the puzzle game solo, team up or battle friends. Up to four players can get in on the action and can play anyone of six modes – Marathon, Endless, Ultra, Sprint, Battle and Battle Ultimate.

Social Feeds keep you up to date with in-game events and allows you to track your friends’ scores. Tetris Ultimate captures and saves your play style, allowing you to always be able to play with or against your friends, even when they are offline.

Leaderboards make it easy to post your scores and see how you measure up against your friends. An official Tetris Rank in the shape of Tetriminos has been implemented to classify and identify the top players. Are you one of the best in the world?

Like most people, I spent many hours playing Tetris on my original Gameboy back in the early Nineties. It was an addictive game that kept me playing for endless hours during long car trips and while at home. It was just about getting that next line. That was many years ago, and some of the more recent gamers probably never got Tetris Fever. Good news is that Ubisoft has released a new version of the game, which is presented as the Ultimate version.

For those who haven’t played Tetris before it’s a very simple puzzle game. You have seven different shaped blocks that fall from the sky, and you need to arrange them as they fall into lines to get rid of them up. You need to place them so you can continue to eliminate lines and not get stuck with pieces that stack up to the top of the screen. If you eliminate four rows at once, you get a Tetris. As you get further in the game, things continues to go faster and faster, putting more pressure on you to make quick all the decisions and right moves in a split second.

So, the good news is that Ubisoft nailed Tetris doing a great recreation of the original game. It feels as good as it did all those years ago. The one major change is that you can store a brick for later with a shoulder button and use it when you need it. Great for those lines that you can use to make a Tetris. The game is littered with modes as well. There is Marathon mode (regular Tetris), Endless, Battle, Sprint, Ultra and Battle Ultimate (Battle mode with power-ups). If you want to play vanilla Tetris that’s here for the purists. There is something for everyone. There is also a fully functional leaderboard so that you and your friends can compete for the top scores and measure up against the world. 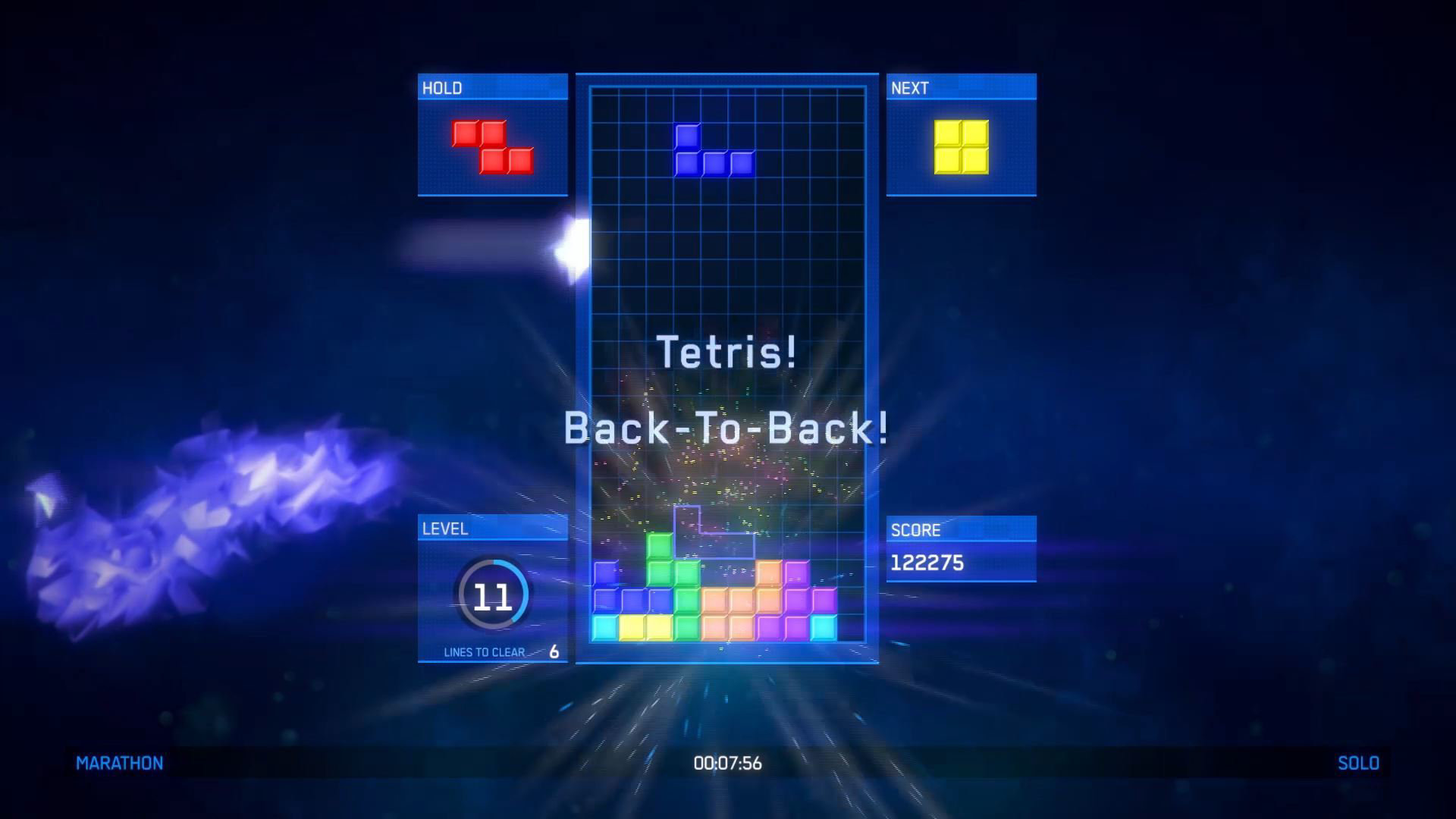 This brings me to the games major issue. Tetris needs to be a smooth experience as you lay the blocks out and make the most out of the situation. Here’s the problem… it’s not here. There seems to be some slowdown for me every 20-30 sec with a little hiccup. From the research I’ve done it’s due to its “always on” internet connection and varies based on the amount of friends. I only have 200 PSN friends, so it’s not super bad, but I have seen examples online where people have reached the 2000 friend limit, and it’s unplayable. The only answer is to disconnect the internet at that point (I am sure this will be corrected through a patch soon). I also had trouble connecting to play with other people online. I tried several times and could never get a connection to play with someone else. They did include some bots to play against so I was able to get the full Tetris experience. 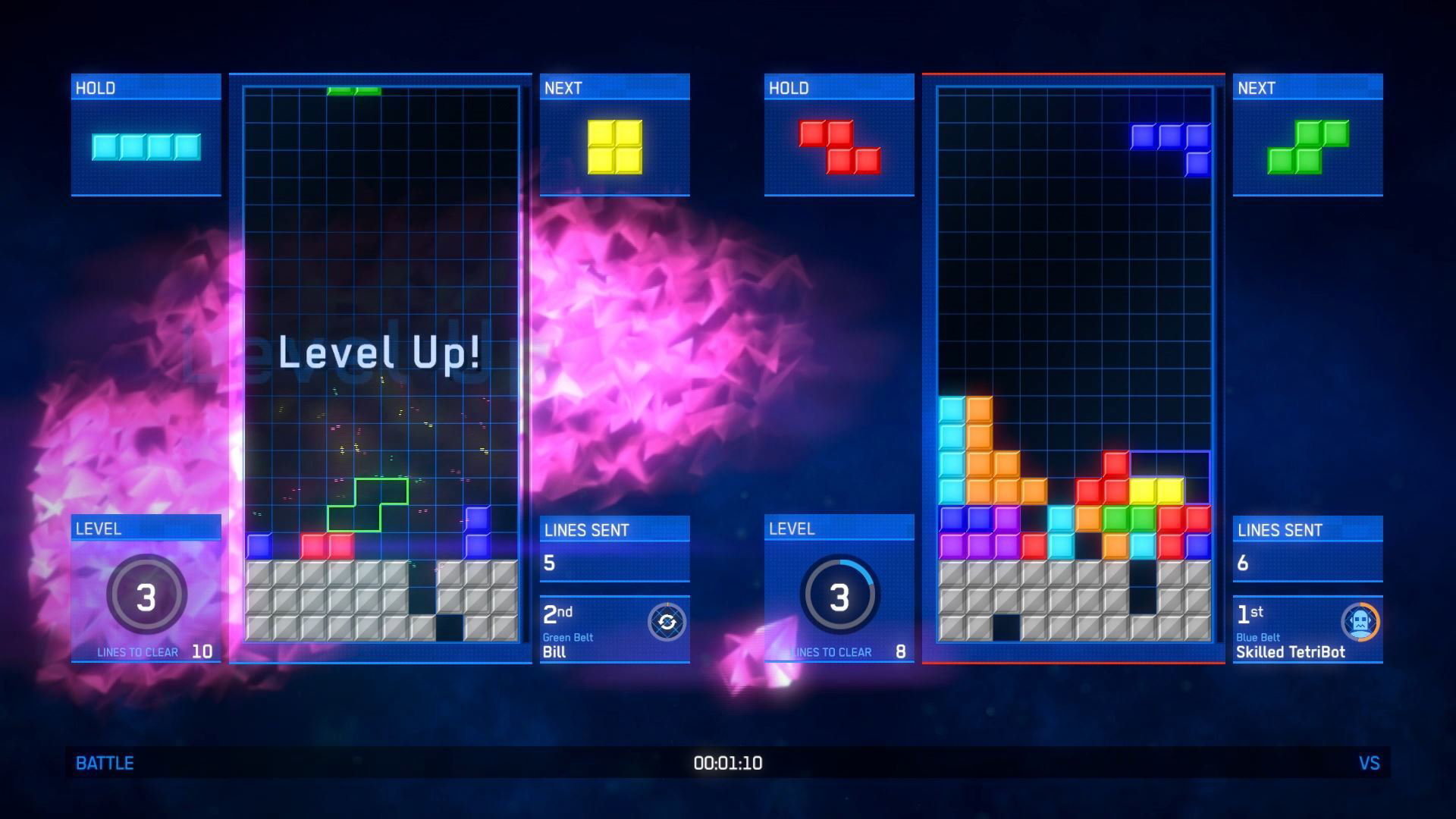 The game looks great. I loved the new stylized menus and backgrounds since they really bring the game into this century.The colors are vibrant, and all of the blocks are very distinguishable. The only issue I had with the backgrounds is every once in a while there was a white flash behind it which was a bit distracting. The sound took me back 20 years though – they remixed the original Tetris songs with a more current take. I still can’t get the songs out of my head.

There are 12 trophies in the game – 1 Gold, 4 Silver and 7 Bronze. Most are obtained for playing and reaching certain goals throughout the modes. If you get really good at Tetris, then you should be able to obtain these pretty easily. It’s a good mix for a $10 title.

Overall Tetris Ultimate is a good game, which pays homage to the main old-school game while also presenting additional modes for the people looking to try something different. It’s too bad there is some slowdown when connected to the internet, because that holds the game back from being pure awesome. I really hope that will be addressed in an upcoming patch, so that everyone can enjoy it.

It's a good game, that could have been great.