Own the Koop! Use blasters, missiles, turrets, mines to take down your friends’ UFOs. Drag them to the Chikkinizer while you ignore their whining. Shout taunts at full volume as the chikkins fly, for they cannot mute the FLUSTER CLUCK MASTER! Earn bigger guns, faster ships, crazier hats! Offer your friends relief from dropping them in the Chikkinizer by chikkinizing them immediately with a MegaField, and laugh all the way up the corporate ladder!
• Single-Player and 2-4 Players Split-Screen
• 5 Game Modes: Campaign (with Co-Op), Battle, Deathmatch, Team Battle and Team Deathmatch
• 6 Characters
• 18 Ships
• 33 Hats
• 9 Weapons
• 12 Power-Up Items
• 4 In-Game Modifiers
• 10 Great Unique Maps
• 3 AI Difficulty Options
• 3 Firing Modifiers
• 3 classes with 50 levels – Including Assistant To The Regional Manager
• True 64 bit Blue Sky 3D Graphics
• 1 Secret Menu

Welcome to the world of Fluster Cluck!! Your work for the Chikkin Koop company and your goal is to collect ingredients and turn them into Chikkin! How do you do this you might ask? Well, you can use the Chikkinizer to turn things on your map into chikkins. The above trailer will give you some more insight on this process.

Upon loading up Fluster Cluck I wasn’t really sure what I was getting myself into. It’s an interesting name, but it doesn’t really tell me much other than it involves chickens. Once I started playing I felt as if I was just dropped into the game, unprepared on how to play… and, oh surprise, I didn’t do very well. The game does not take your hand in learning how to play, as there are no tutorials or on-screen prompts. This really made me not like it early on, but I wanted to become better at it so I gave it another go.

So after a very brief hiatus I came back and taught myself how to play a little more. Then I learnt the beauty of the game: it’s a simple game. I was over-complicating things. This is why the game reminds me of the multiplayer titles on older N64 games like Mario Kart or Diddy Kong Racing.

The premise like I said earlier is collecting ingredients and turning them into chicken. You’re an alien in a space saucer and can collect the items with a beam and carry them over to the Chikkinizer. As you put the ingredients, you collect points, and you are in a race to get as many as possible before the other players get a slice of your pie. You can shoot other players as well to stop them from getting points, and you are even able to use those other players as ingredients prior to them respawning on the battlefield. 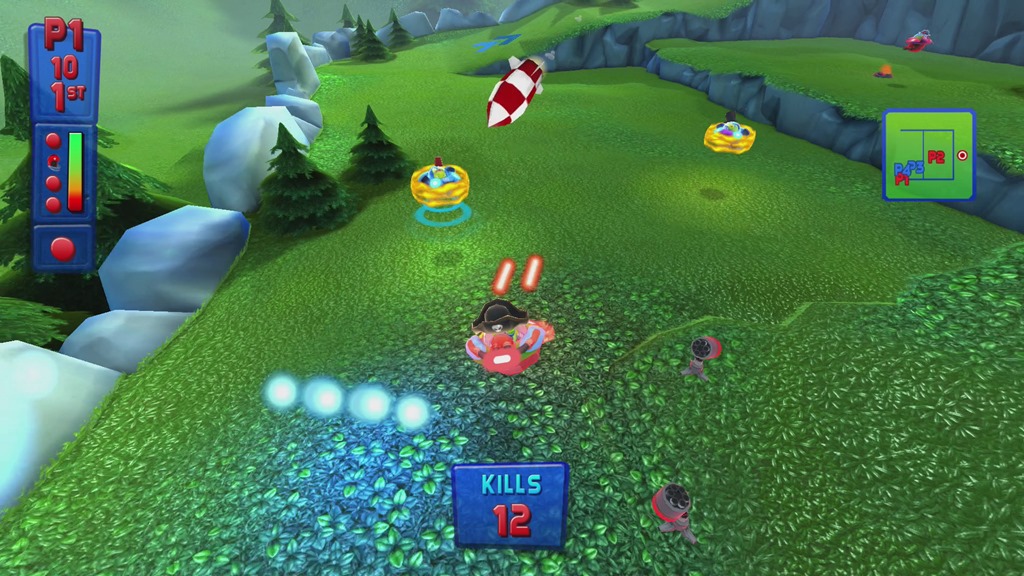 It’s a basic formula, but it works. The hook here is that, like more modern day games, you gain xp points that your character will use to level up. As you go up in levels, you can unlock more characters, ships, hats and weapons that will give you a better edge in the game. You might be struggling very early on, but as you get those items you will get better and the game will become enjoyable even addictive.

The game has multiple modes that you can play, like Chikkin Hunt and Death Match. They are fun and definitely give you a different gameplay experience. There are multiple strategies you could employee for getting a high score, but I enjoyed camping out near the Chikkinizer and shooting down opponents, then dropping them into the Chikkinizer along with their cargo. 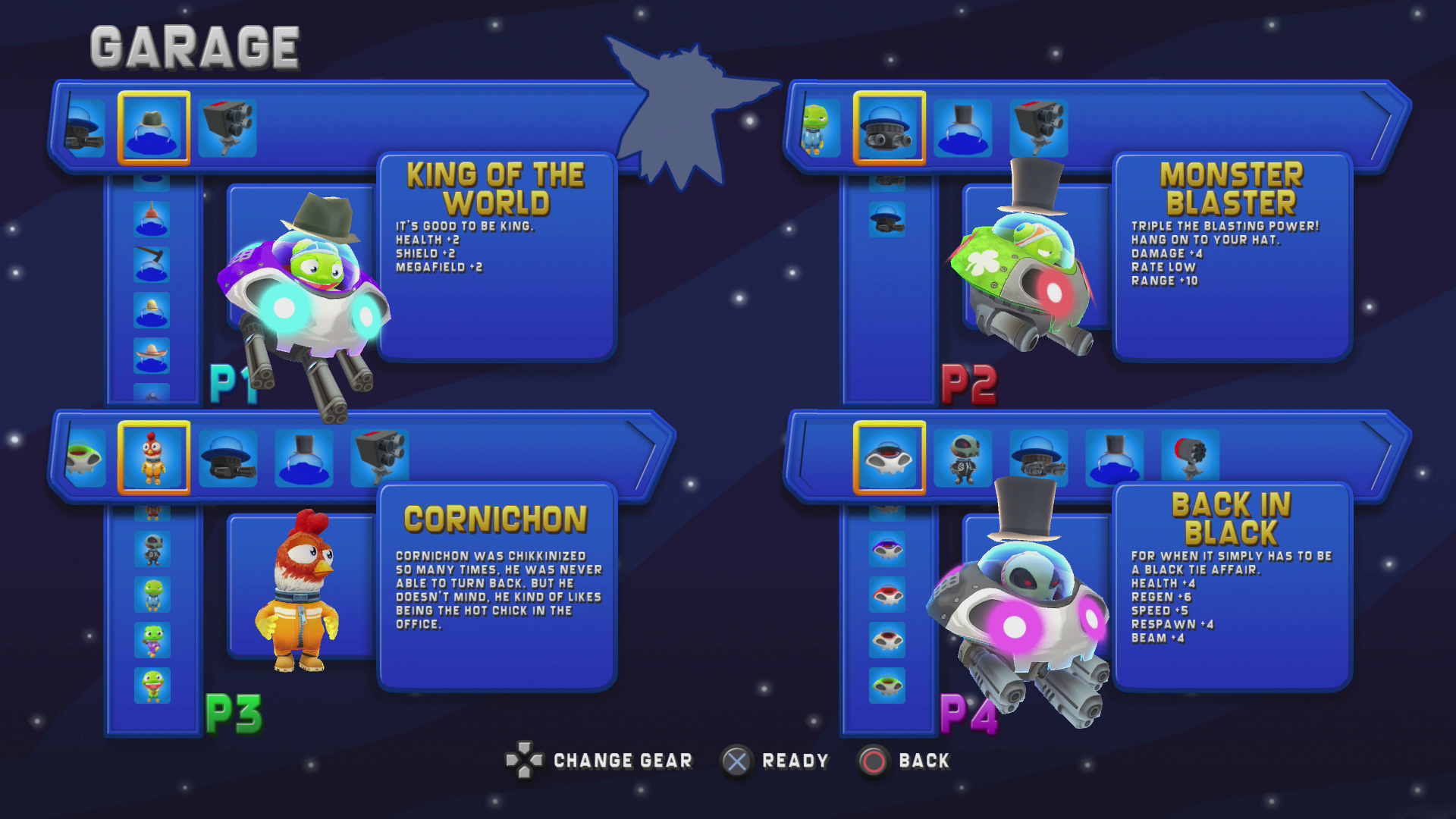 This is a game that will benefit from the new Share Play feature on the PS4 due to the lack of online multiplayer. This game is really good when played against human opponents, but it’s not always easy to get them over tp your place. This is a simple solution which fixes that and allows you to play against your friends online.

The game is bright and colorful looking. It does it’s best to emulate the environment from ages ago but with a 21st Century twist. The character models are obviously crisper and better looking than the N64 days, and it was very refreshing to see a game take that looks so colorful among the large number of dark games that are available for play these days. The sound design is fun, but nothing special overall, with generic music. But I did enjoy the clucking coming right from the speaker on my controller.

There are only eight trophies in the game, 2 Gold, 3 Silver, and 3 Bronze, and with some patience and time you should be able to unlock them all pretty easily. 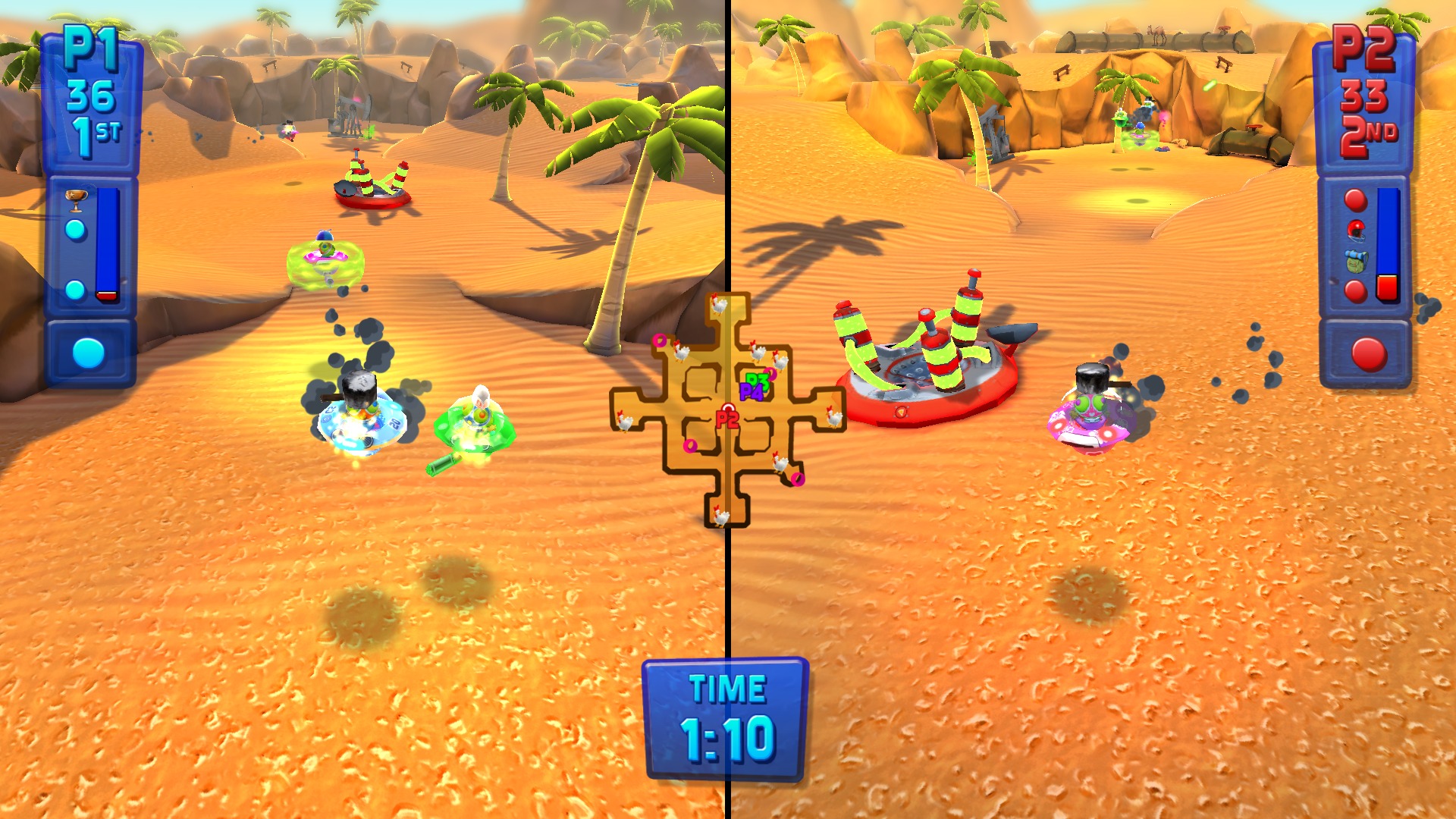 Overall I liked Fluster Cluck. It’s not a great game, and I don’t think they were aiming for game of the year here. It’s simple, but addictive, and the more I played, the more I wanted to play. I was really focused on getting through those levels and getting promoted through the Chikkin Koop to Vice President. The humor is so absurd enough that it works, making it an easy game to recommnend to people.