After having so much fun with Anomaly 2, I was ready for more tower defense fun. As soon as I heard that Defense Grid 2 was available on PS4, I asked for a review copy so that I could let you know if this game is a title worth your time or if it ends up being a “me too” member of the genre.

* Individualize The Experience –Upgrades and power ups allow gamers to enhance and customize their strategy as they play in order to react quickly to new challenges.

* Co-op mode – Allows players to work with a friend to build towers and defend power cores.

Right from the start, Defense Grid 2 offers a large number of options for enjoying your time with the game, both offline or online, with several options to tailor each match to the specific requirements of each player. But before you dive into any online matches, I suggest you take your time with the story campaign. This will allow you to learn the basics for the game’s flow while also getting to know the strengths and weaknesses of each of the towers at your disposal.

This will allow you to quickly know what tower to use when going against an enemy who, for example, is too fast to be destroyed by a powerful tower that takes too long to fire a second shot. On the other hand, you might want to use stronger towers here and there to make a dent on an enemy’s hit points, knowing that the set of towers right around the corner will be just what is needed to finish the job. A few missions in you’ll be introduced to booster bases that, as you might expect, improve the stats of the tower placed on top of it. Boosters can also be upgraded, allowing players to boost the booster in order to boost the stats of a tower, which can itself be upgraded even more. That’s a lot of boosting for a low price!

Your main objective is to eliminate all of your foes while making sure they don’t get a chance to steal one or more of your cores. But even if they make it to your base you still have a shot at making things right. Unlike most of the games in the Tower Defense genre, you can eliminate the enemies that are trying to steal your cores, adding an extra layer of strategy to the mix. Defeating the enemies that are entering the battle is just as important as taking care of those that managed to make it past your first line of defense. 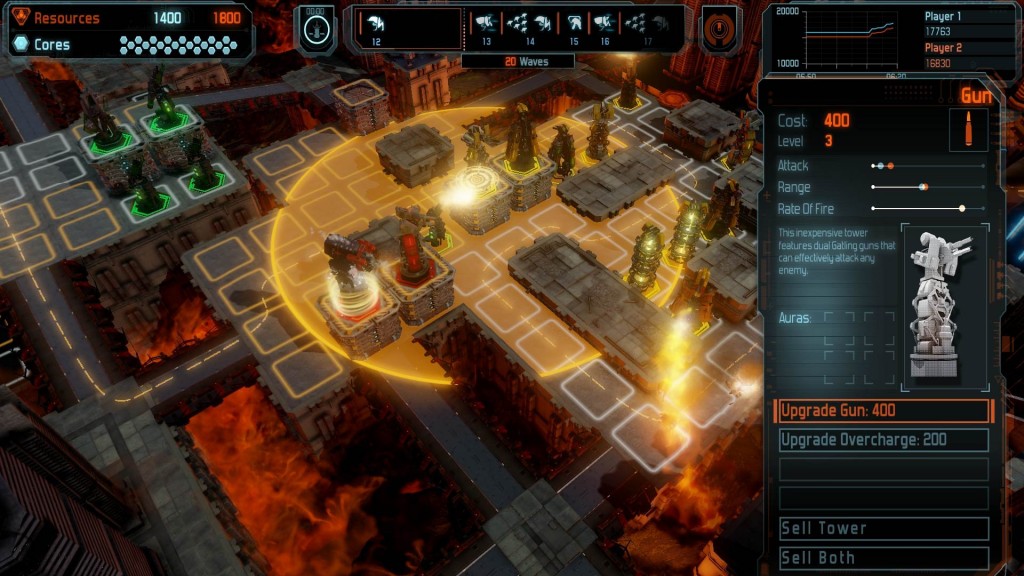 Another thing I liked is that towers can not only be placed at the sides of each “road” but also IN the road itself, letting players plan for every level on the go by leaving towers or boosters on the way, forcing enemies to go into a particular area or to buy you some extra time by sending them down a longer road.

Trophy hunters will be happy to know that Defense Grid 2 features a full trophy list with a Platinum trophy. Some of the trophies will require great skill and a lot of effort (as is to be expected of a game like this), but veterans of the genre will be able to maximize their time with the game by aiming for more than one trophy at a time if they plan things just right. 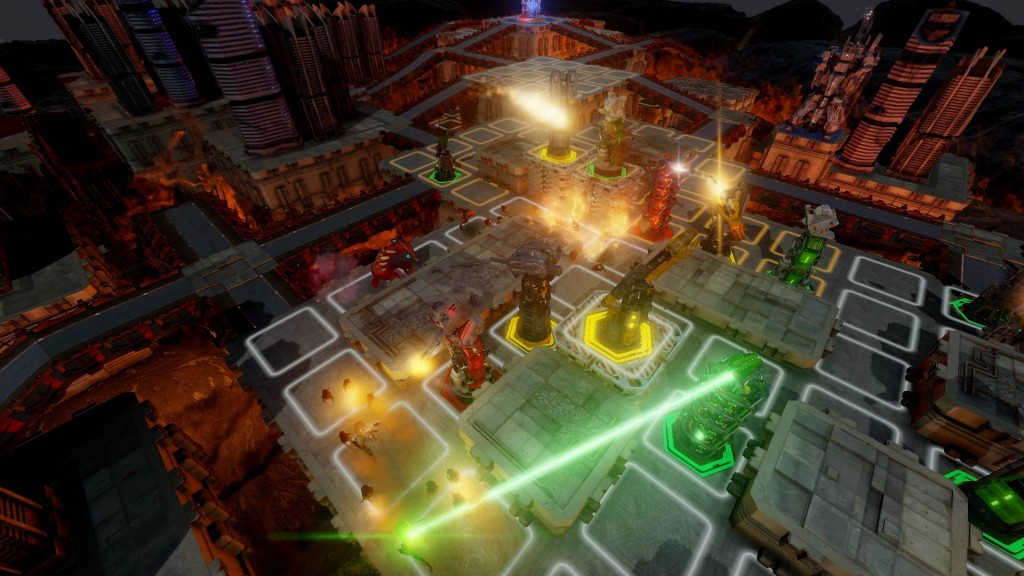 And speaking of trophies, one that will keep you busy is Master Strategist, which requires that you get 100 gold medals. Medals are awarded depending on your score, which is calculated in real time. The more enemies you defeat, and the more resources you have as you do it, the better your odds of bumping up your score closer to the next threshold, all the way to a gold medal. But since you need to use resources to purchase more towers and boosters, and to upgrade them… well, you’re left with a nice balancing act that will always keep you busy.

Defense Grid 2 is an excellent tower defense game with great visuals, non-stop action and a huge amount of content. The single player campaign offers a lot to do, and the online multiplayer component will add many hours to your time spent with the game. As is always the case with a new release, the online side of things isn’t fully populated yet, but every day more and more players join the fight. But the game does let you enjoy the single player campaign as you wait to be matched for an online match, which is always better than having to wait doing nothing at all.