Poltergeist: A Pixelated Horror, a haunting puzzle from indie studio Glitchy Pixel is out now on Vita. Are you good enough to scare everyone away from your home?

Have you ever wondered what it feels to be a ghostly being?
You have always lived happily in your manor. A manor that you managed to obtain with a lot of hard work and many personal sacrifices. Naturally you don’t want anyone else to take care of it, not even in death! But now, after your demise, many tenants have taken over it, and this is intolerable to you.
Luckily, your love for your manor has granted you powers that will help you get rid of those pesky individuals.
Watch them run and scream, scaring them using your intelligence, wit, and with the use of powers like possessions, spectres, altering objects and more.Have fun and play with the occult… and become a Poltergeist!
Poltergeist is a puzzle game for PC/Mac/Linux in which you are a ghost named Henry B. Knight. In which you will scare the tenants currently living in your house, so you can have some peace at last in the afterlife.

Poltergeist: A Pixelated Horror is a game from Glitchy Pixel, an indie dev studio from Bogota, Colombia, with the work of Italo Capasso and Diana Pacheco as its driving force. This is a fun puzzle game where you play as the ghost of Henry B. Knight, who is not happy about all the new tenants that are trying to live at his home. What is a ghost to do when his home is invaded? Why, haunt everyone until they run out screaming!

For each level Henry will be given access to a set number of skills with finite uses, going from animating objects to summoning a portal to take all pesky tenants in a room to a dark, dark place. Every skill you activate will only affect the single room where you activate this, and this is a very important part of the game. There are two specific skills (a bell and a ghostly dog) that help you move tenants to another room to maximize the damage you can deal to them. Each one can have up to three hit points, and the skills at your disposal can deal between 1 and 2 points of damage. 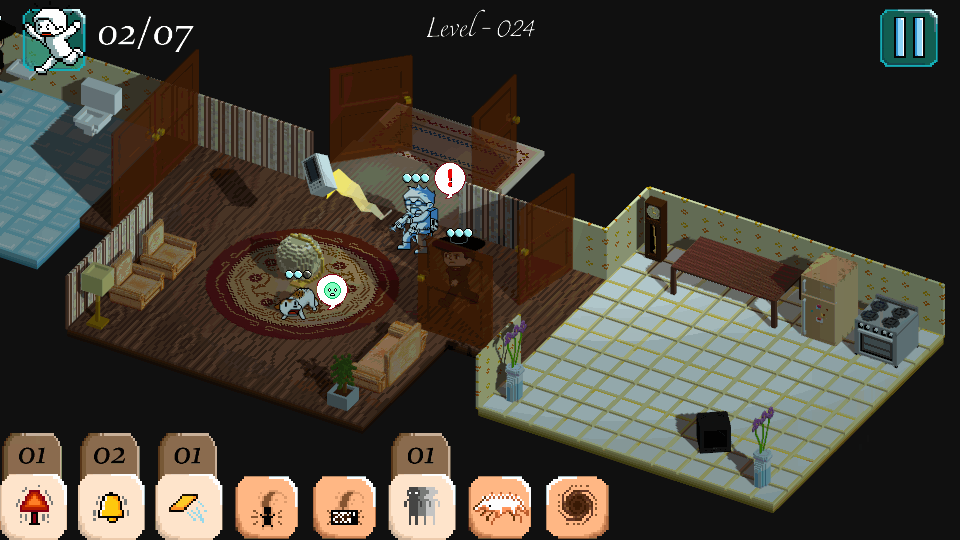 To complicate things a bit, some of the tenants have special powers that can instantly nullify one of your skills, meaning you must plan accordingly and either isolate them or send them into rooms where you can damage them along with other tenants to be able to “live another day” in peace. This makes a handful of the levels be more “trial and error” than the rest, but once you find a solution, you’ll end up feeling great about your expertise. And even though some levels have one specific solution, several can be completed in a couple of different ways without having to use every skill at your disposal.

The game features 60 levels split into four different eras. Each set has 12 regular levels and 3 boss levels, and the bosses will test everything you’ve learned up until that point. The first boss is easy to figure out since he teleports to the room at which a skill is being used, but later bosses add new twists that must be taken into consideration, completely changing how you approach things. 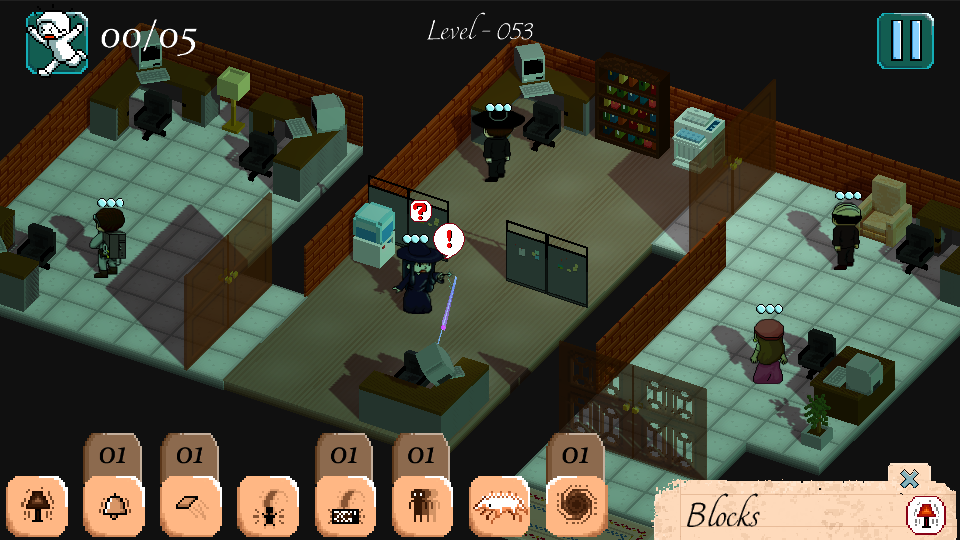 Trophy hunters will be pleased to know that, aside from one particular trophy that requires a lot of work, most trophies will be unlocked after you’ve completed all 60 levels. One trophy demands that you find the “glitchy objects” in some of the levels, but these take a handful of minutes to activate after you’ve finished every level since you can just go to the specific levels and to trigger them. The one trophy that will require you to bring your A game is the one for completing the time trial mode (unlocked after completing all 60 levels) where you’re tasked with finishing every single level in the game (one after the other non-stop) in 90 minutes or less, giving you a minute and a half on average for each one. 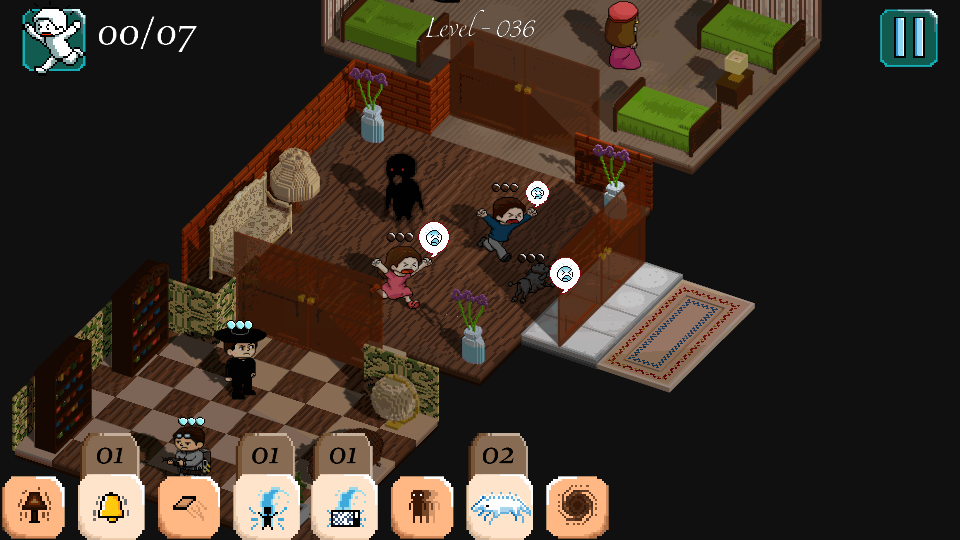 Overall, I loved my time with Poltergeist: A Pixelated Horror thanks to the fact that it’s available on PS Vita, making it easy to play a couple of levels here and there, putting the portable into sleep mode to continue as soon as I had some free time. I definitely hope we get a sequel at some point because I’d love to see the team expand on the ideas they’ve presented in this first release.