Pure Pool has made its way to PS4. Did they clear the table or did they illegally pocket the 8 ball?

Let the makers of Hustle Kings™ transport you to the slick and exciting world of Pure Pool. Experience a living, breathing, bustling Pool Hall from the convenience of your living room – all wrapped up in VooFoo Studios signature jaw-dropping visuals! Whether you prefer to spend your time playing solo or weighing up against the competition, connect and prepare to be blown away by the next best thing to real life Pool.

With four game modes from classic American 8 Ball Pool to Killer, four challenges from Perfect Potter to Royal Rumble and full live online Multiplayer, rack-up, hone your skills and compete against the best in online tournaments and matches for a place in the Global Leaderboards. Pure Pool also builds a DNA profile as you play creating an AI interpretation of yourself, your friends and your foes – which you can still play against, even when they’re not online.

Pure Pool is a great video game version of Billiards. It’s been quite a long time since I have played billiards, but Pure Pool brought back all my fond memories of mostly losing like a chump.

The first thing I noticed when starting to play the game is the overall presentation. You start by walking into a pool hall, and all of the creator logos are part of the hall itself as you walk into the venue. Once you get to your table you are then able to start playing right away. You can use the Options button to pull up your menu from where you can select one of the many modes that are available to you. It’s a smart menu system that you can even easily access while playing.

You have several options for play including League Play, Online, and a Career mode. I first started in the Career mode which game me several tournaments to enter. You can either play 8-ball or 9-ball tournaments, and what I liked is that instead of just playing regular 8 ball rules they threw in some variations of different pool games such as Killer and Accumulator into the mix. They also added several challenge games based on ball sinking streaks, speed potting, and other fun tasks. 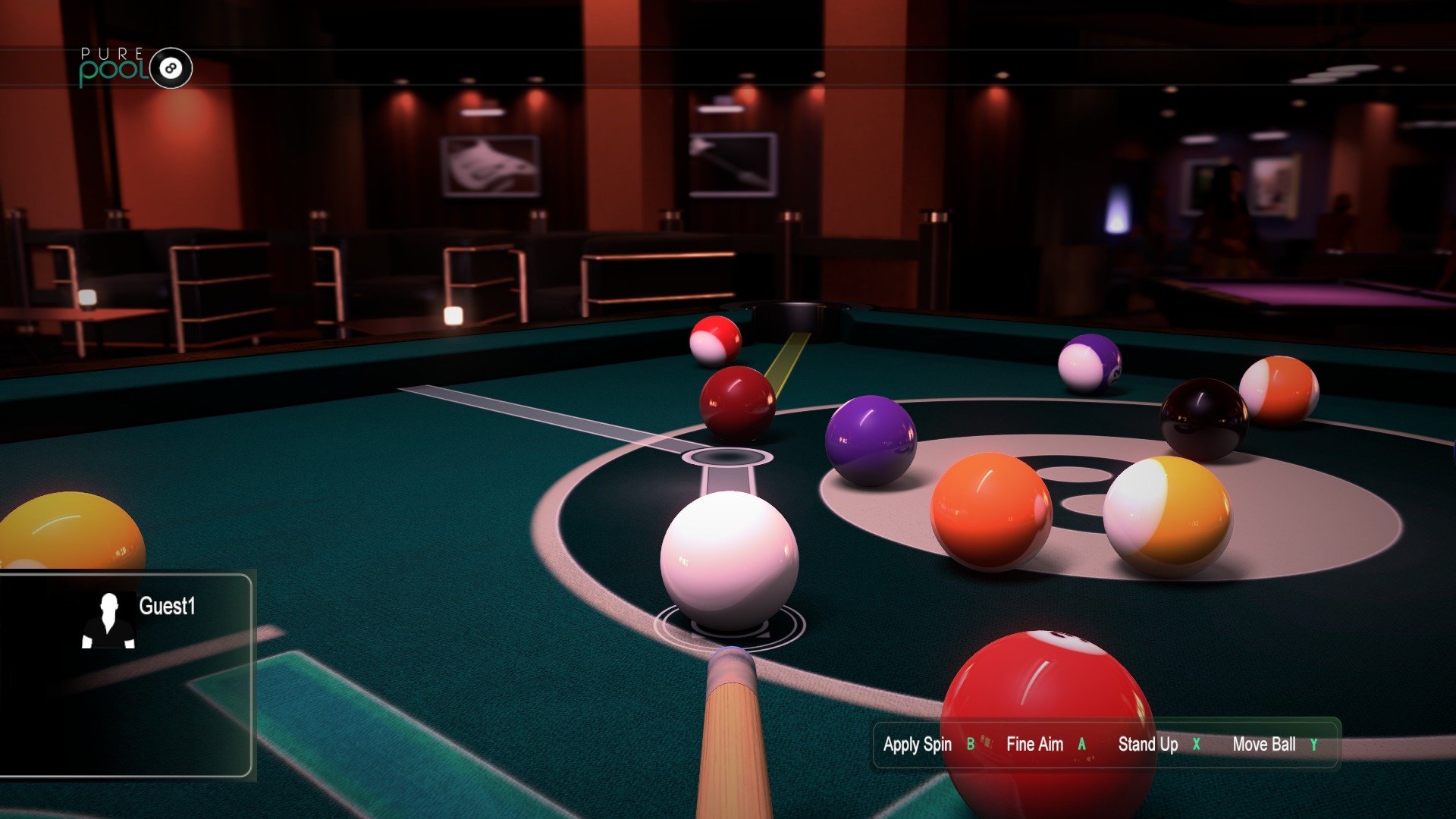 One of the most important aspects of any pool game is the physics, and Pure Pool handles this very well. When aiming the cue ball, you get a white line showing where you are aiming. Depending on your distance from your target, you will also get a yellow line showing you the where the ball will potentially go when hit. This helps you line up some great shots, and the closer you are, the more accurate it will be. If you are further back it’s much harder to read. It helps to reinforce that good pool players can sink balls, but its the best ones who control where the cue ball ends on the table to make the easiest shots.

The online play was very smooth. Whenever I wanted to play against a human opponent, it would quickly match me and usually against someone of my skill level. There was no lag while playing the game against the online players, and the matches flowed very smoothly. My only complaint about the online play isn’t even the online play itself. There is a status bar that tells you at the top who’s move it is and how many balls they have left, but it also flashes when new people log into the game. Not just friends, but anyone logging in at all. There were so many people playing that it just kept flashing new names as people logged in, instead of the useful info it was supposed to be displaying. 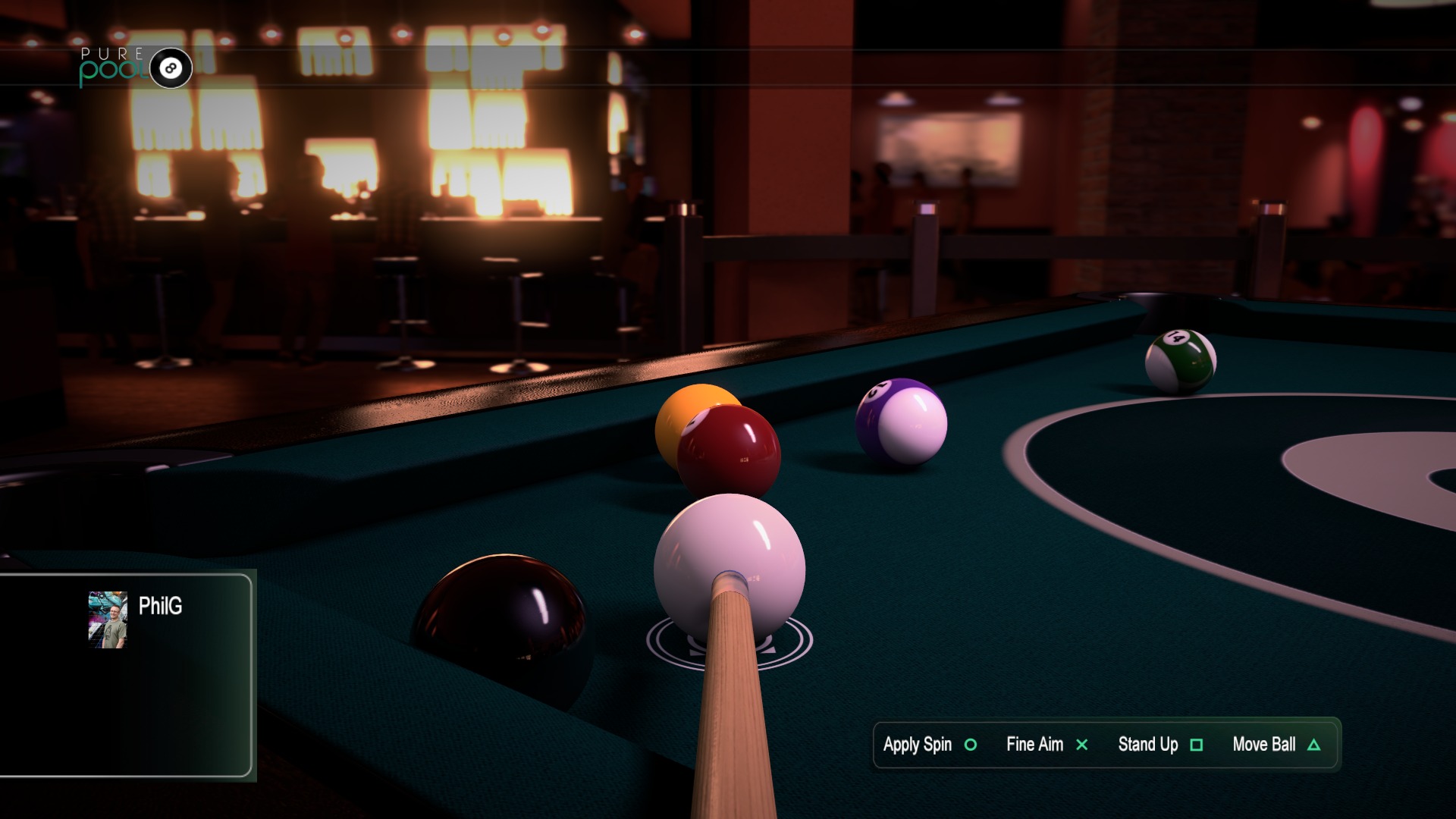 Everything in this game is very visually appealing. The table looks great, and the balls look perfect down ti the shine that you might get off them when the lights hit them. The lounge you’re playing in looks great as well, and there is stuff going on in the background giving off a certain authenticity. I also enjoyed the jazz music that they used in the game since it completely adds to the atmosphere of the game sucking you into its world.

There is a platinum trophy to get along with 44 other trophies up for grabs, but I didn’t even come close to the platinum. Apparently it could take over 100 hours to get all trophies in the game, so trophy hunters need to consider this is going to be a marathon and not a sprint.

Pure Pool is a great game and a great time sink. There were times when I didn’t even realize that hours had gone by while I was playing. This is a worthy addition to your PS4 library especially for a game that you will continually come back to over and over again.