Worms has entered the next generation. How did the upgrade to the formula fair overall?

Worms™ Battlegrounds brings friends and families together in the noble pursuit of self‐improvement, world domination and exploding sheep.

Form Clans, Take On The World

Join together with friends and other Worms™ Battlegrounds players to form a fearsome team, name your clan, design your own emblem, promote other players to act as leaders and officers. Enter your clan into the league and fight together to make your mark on the leaderboards. Nobody wants an empty trophy cabinet!

Story Mode’ adds a ton of variety by introducing physics based contraptions for the first time ever. A plethora of interesting machinery spices up the gameplay, and makes solo Worms™ much more fun! The single‐player game isn’t only about dealing death and destruction, it’s also about negotiating tricky swinging rope bridges and rescuing friendlies from death defying traps! The player spends much more time playing, and much less time waiting for their A.I. opponent to take a shot.

So confessions time: this is my first Worms experience. I know the series has been around for 20 years now, but I somehow have never ever played a Worms game. So here are my thoughts about my first foray into the franchise.

As with most games, I fist put my focus on the single-player campaign to teach me the ropes. The campaign has an interesting story with a British Narrator. You are in a museum trying to get an artifact called the Stone Carrot for the narrator from the villainous Mesmer. The cool thing about the museum setting is the levels backdrops are set in different historic times. You start in the prehistoric era and work your way through history. 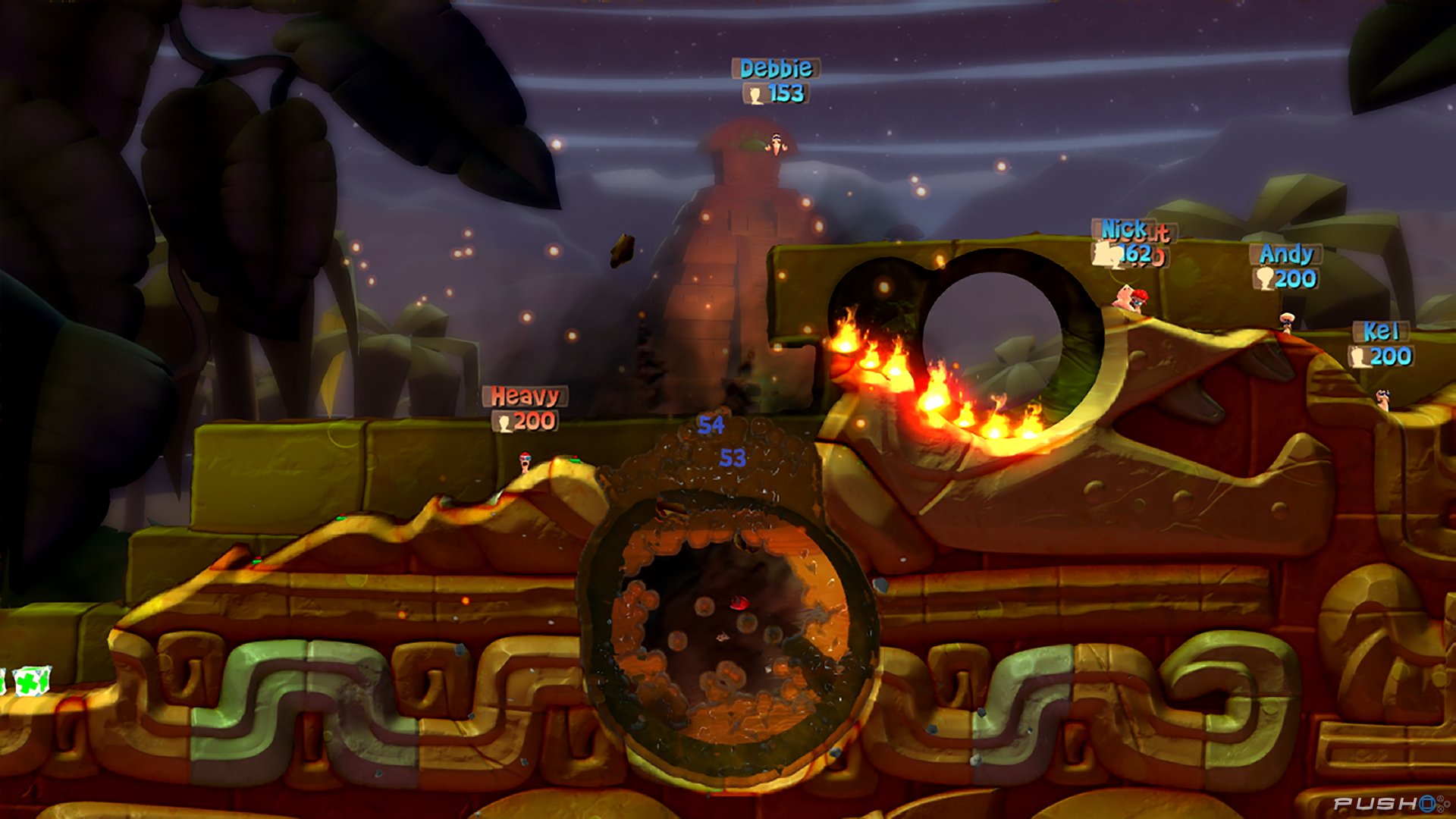 The story does a good job introducing you to all the different game mechanics, gadgets, and other tools you will use. It is a 25 level tutorial for the multiplayer, and it does a great job at it. I did find that the A.I sometimes seemed to be a bit sluggish in making decisions. The campaign mixes up the level design to give you something different when playing, so that your objectives feel fresh Sometimes it is a death match, and sometimes it is more of a puzzle that needs to be solved.

The heart of Worms is the multiplayer mode. It has local and online modes available and, As expected, a game like this is great with friends at a party when playing couch co-op. Since it is turn-based, you can pass the controller around and keep the matches moving. The game’s online modes are Team Deathmatch or Forts. Forts is basically a different version of Team Deathmatch but the focus is on protecting your forts while breaking into your opponents forts. 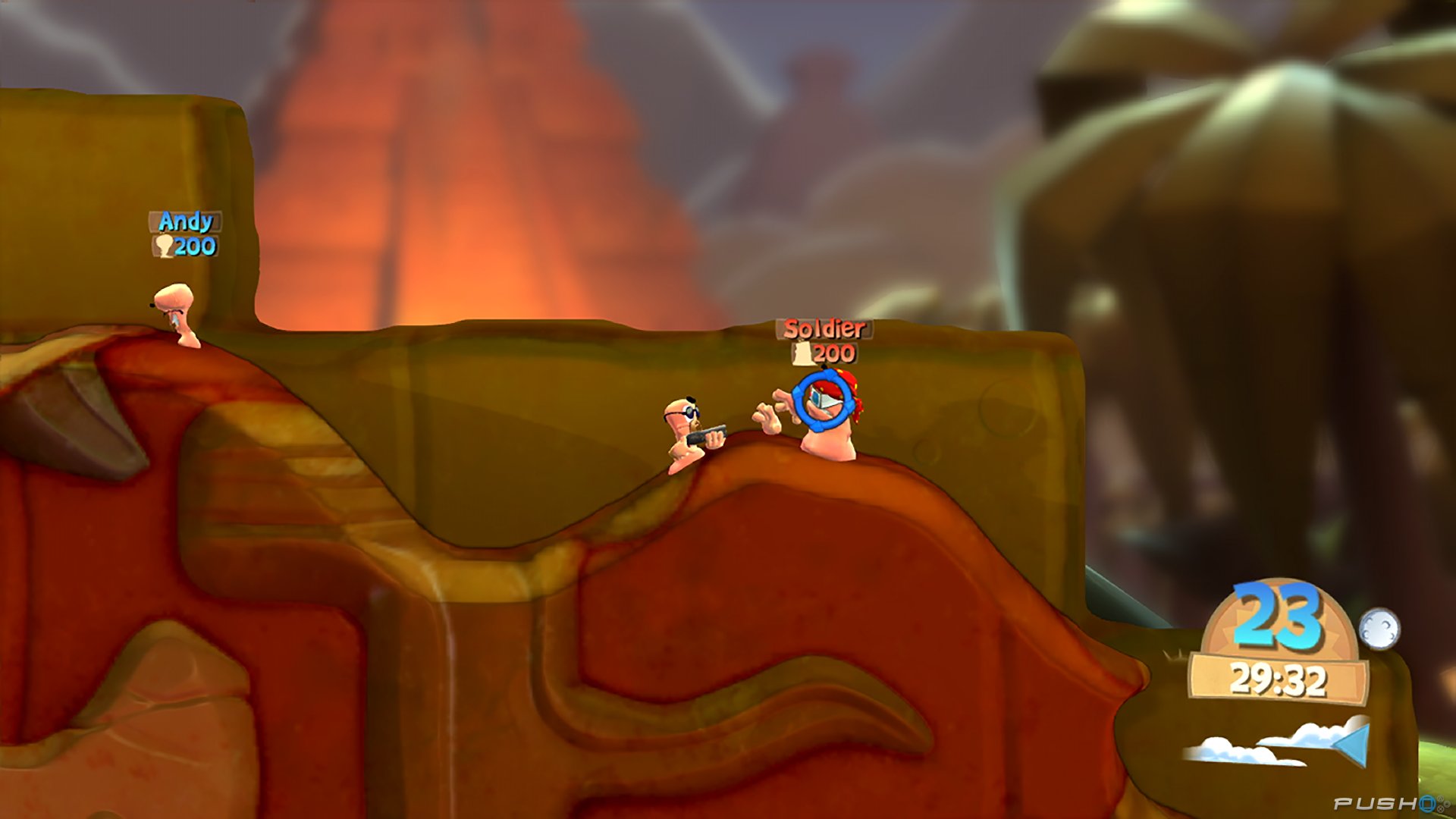 They also give you a choice to join a clan in Battlegrounds mode, and you can name your clan, choose the classes that will makeup the team, give the team names, choose what they are wearing and what their voices will be. You’ll then be playing against other clans for control over the top of the leaderboard. There is a lot of cool things in the multiplayer mode, but to make it work for you an active community is a must (it’s getting there).

There are 31 trophies in the game including a coveted Platinum trophy. There are trophies for the single-player campaign, online and other various tasks. I was very happy to see the inclusion of a platinum as a lot of downloadable titles have not included that recently. Great value for the trophy hunters out there.

Worms is a great game that can be played on its own, but is better when played with friends or online. If you haven’t played any games in the franchise, this is a great introduction to the series, and if you’re a Worms vet then there are plenty of new features here for you.

Great addition to the worms franchise

Atlus announces an Earthbound-like RPG coming to PS4 and Vita in October!