Guacamelee!, the hit game released last year on PS3 and Vita has now arrived on PS4 with a new Super Turbo Championship Edition. How did it fare with the system upgrade?

Guacamelee! Super Turbo Championship Edition is a Metroidvania-style action-platformer set in a magical world inspired by traditional Mexican culture and folklore. Get ready for…

Guacamelee! was one of my favorite games from last year, and it is in my top 5 for 2013. I was very excited to hear about a PS4 release this year with newly upgraded features.

If you missed Guacamelee! last year, you play as a Mexican villager who is killed by dark forces. You are resurrected as a Luchador with special powers and are sent on a quest to rescue El Presidente’s daughter. The game is a Metroidvania platformer, and as you explore the world and gain new powers, you will be given access to newer areas on the map. EdEN did a review for PS3blog.net and he liked it quite a bit.

Guacamelee! Super Turbo Championship Edition is more like a .5 sequel than just a straight port. This version adds new levels, new powers, and new content to the entire package, making a great game even better. 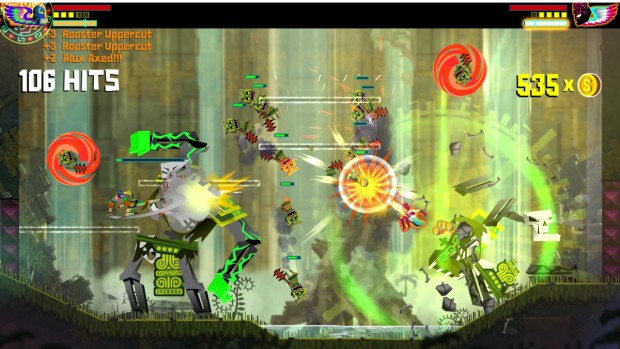 It becomes clear very quickly that this is a different game when you watch your first set of cut-scenes which were not present in the first game. This is one of the many changes that make the game a new experience even if you did play it on PS3/Vita. About one hour into the game you stumble upon your first new content when the game has you go in a completely different direction to a new fishing village which wasn’t in the first version of the game. These new levels still retain the great and intelligent level design from the original but resets the rules and makes it very clear that this is not the same experience. All of the new levels are great, and they still manage to fit in the game very well while providing challenging platforming sections for you to experience.

The new powers are pretty cool. One of these is the “Intenso” meter which builds up as you go and when ready, it unleashes your inner spirit. You essentially become much more powerfully for a short time. You can save this for situations when you are trouble to help you out of tough situations. As a bonus, you can actually activate this as a chicken as well and “Cluck Some Butt.” You also have the new “Pollo Bombs” skill available you when you are a chicken and a new “Shadow Swap” ability as well. All of the new moves add more to the experience, making it deeper than before. 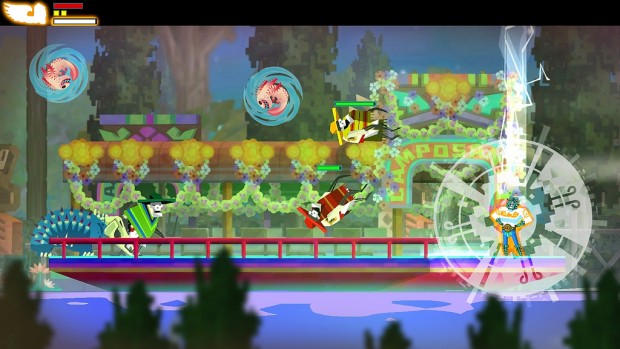 The game retains its charm and humor as it had in the previous game. I beat the game on PS3 twice to get the platinum and I am still chuckling at the fun one-liners delivered by the characters. There are also many Easter eggs planted throughout the game, most reference different video games or slightly “Luchador-ized” versions of them. I always liked to stop and figure out where they are from, and with the new version this game found a way to put some more in.

The game also has a new coin system when beating major battles with enemies you will earn silver coins which can now be spent on different costumes for your character. These new costumes will generally grant you positives and negatives in battle so the game will become easier in some aspects byt harder in others in order to balance things. The game also includes ALL of the DLC from the PS3/Vita release so you can take on the challenge rooms and put your skills to the test.

With this being a new game, there is a new trophy list so even if you platinumed the PS3/Vita you can now start again at earning them. While most of the trophies have returned the newer ones from the DLC are included, plus some extras for the new content in the game in general. This is a game definitely worth taking the time to platinum.

Guacamelee! Super Turbo Championship Edition is an awesome game and I am glad to have had the pleasure of replaying it. If you missed this on PS3/Vita now is your time to experience an awesome title, and if you did play it there is enough new content that I can easily recommend a replay.

Atlus announces an Earthbound-like RPG coming to PS4 and Vita in October!