In Titan Attacks! old-school is new-school again. The game is a love letter to games like Space Invaders and Galaga, adding some new twists of its own.

Single-handedly turn back the evil invading Titan army! Drive back the aliens across the Solar System, and finally defeat them on their homeworld in this modern remix of classic arcade shoot’em’ups.

Titan Attacks! has the same easy-to-learn but hard-to-master gameplay of classic arcade shooters, but is packed full of new features, new strategies, and stylish neo-retro visuals.

FIGHT the Titan Invasion across the Earth, the Moon, Mars, Saturn and finally Titan itself!

EARN bounty money and upgrade your ship with new weapons and powers!

DESTROY falling wrecks, dodge hurtling asteroids and capture escaping aliens – or blast them from the skies!

WIN prizes in sharp-shooter challenge stages and compete with other players for a place on the online leaderboards!

Purchasing this content entitles you to the PS3™, PS4™, and PS Vita versions!

As I mentioned earlier, the game is a homage to classics such as Space Invaders. You control a spaship at the bottom of the screen, and can move left or right, and shoot. Where it differs from older titles is in the variety of enemy ships, the upgrades, and boss battles.

Things start very simple with you defending the earth as the Titans have invaded. You being your fight by trying to destroy a very simple enemy type, but as you progress through the levels the enemies get tougher. When you kill enemies you get money which can be used to purchase upgrades for your ship.

The upgrades you unlock for your ship include boosting your shield, increasing your firepower, being able to fire more bullets, or getting a special bomb that destroys everything on the screen, to name a few. You can customize your ship however you want, but the trick to properly upgrade your ship is to not take damage since constantly refueling your ship’s shields takes a lot of money that could be put towards other upgrades. 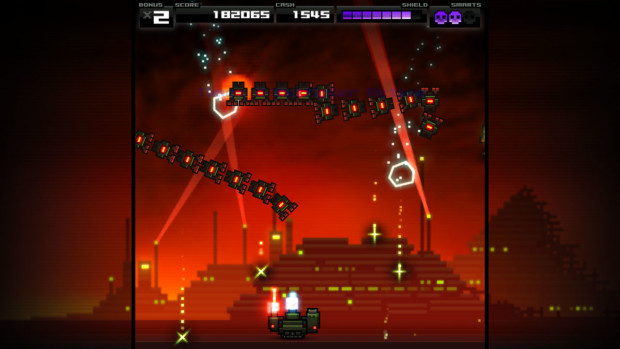 The game has 100 levels to go through as you proceed to make your way to the Home world of the Titans, and every 20 levels you will fight a boss that will take some skill to defeat. When you beat one of the bosses it creates an access point that you can pickup and start again later if you die instead of starting from scratch. The 5 different worlds are very distinct and offer different challenges when you play them.

The game is Cross-buy for PS4, PS3 and Vita, which is a nice plus. I played on the both the PS4 version and on the Vita version, and since the game has an old school 8-bit ascetic visually – but with some major updates – the action on the small screen of the Vita can get frantic and you can sometimes lose track of where the enemy fire is coming from. On the big screen with the PS4 (well, as big as your TV is) all of the action is easier to take in, but the sprites don’t look as sharp. Besides that, both games play identically. I do wish the game was cross-save as well, because when I switched versions I needed to start again. 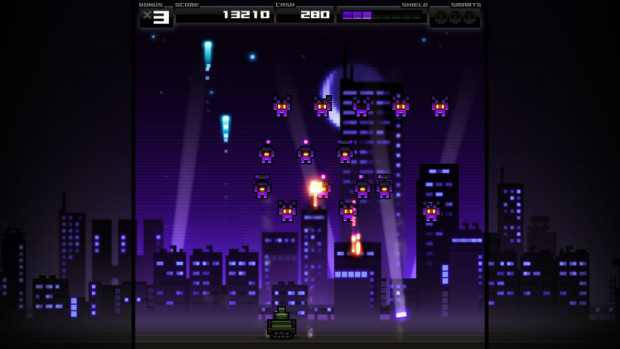 The game has 13 trophies, and most are awarded from progression through the game by beating the boss of each world. There is 1 Gold, 3 Silver, and 9 bronzes, which is not a bad mix for a downloadable title.

Like Resogun, a similar style game, the focus in this one really comes to the leader boards since you are constantly trying to beat your top scores, as well as the scores of your friends, and this is the charm of the game. I will constantly be coming back to this one in between other major titles to make sure stay high in the charts.

Titan Attacks! is a great game with an old-school charm that delves back to my childhood and to the games I used to play. The upgrade system gives it some serious depth, and you will be tested as you try to find the best combination to help you overtake the swarms. If you are looking for a great game to play at home or on the go, while also being challenged along the way, then you should definietly get this one.

New school Old School in the best of ways.