Stick it to the Man was previously released on PS3 and Vita, and now it finally arrives on the PS4 (and it’s free for PS+ members this month… so hurry!). Is this the definitive version?

Hard hat tester Ray, has a bizarre accident and wakes up with a giant pink spaghetti arm sticking out of his brain! With his awesome new powers, he can read minds and change the world with stickers but he’s on the run for a crime he didn’t commit. Can you help Ray out of this sticky situation?

As I’ve said, Stick it to the Man was released on PS3 and Vita on November of last year. Since I never got a chance to play it back then, I’m glad I waited to get the PS4 version since this is the best version yet.

Stick it to the Man is an old school adventure game mixed with some platforming. You play as Ray, a hard helmet tester who is hit in the head on the way home from work – and no, he was not wearing his helmet. This imbues Ray with special powers in the form of a giant hand sticking out from your head. You can use said hand to read minds, reach out-of-way places, or to collect and place stickers which will help you progress further in the game.

Every level is cleverly designed, making exploration and puzzle solving fun, while also it making sense with no weird jumps of logic or things that are crazy weird (thus making the game crazy good). As you make your way around the level, you will run into people that are having issues and who are experiencing a peculiar situation. Guess who is the one who can help them? You can use your powers to read their minds and find out exactly what they need, and there will be stickers around the level you will be able to grab and use to solve their problems. Sometimes after solving them you can read their mind again, and this will unlock a new sticker for you to progress further.

You often have to explore the entire level before things start to fit together. This is an interesting game mechanic very similar to old school adventure games like Monkey Island or Full Throttle, but the twist with the mind reading adds some new depth to the game. The only issue I found was when you had multiple things you wanted to target that were close together, making you have to turn the right stick in a very specific way to make sure you were targeting the right item. 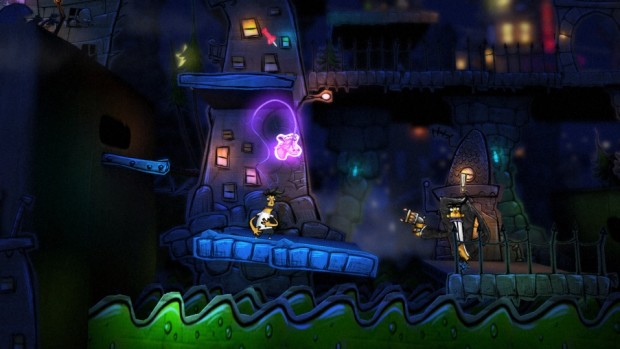 The platforming elements in the game usually come into play when you need to avoid enemies and make it to the next part of the level. The game knows these sections can be tricky, so it gives you some stickers which can help by putting enemies to sleep or by making one of them a decoy so that the rest of them chase after it. Unfortunately, I found these sequences to be my least favorite part of the game. The character jumping isn’t as accurate as you would want it to be in these situations, and sometimes that made it very frustrating for me. I think the designers recognized this to a point, and they thankfully created warp points so that once you were through a section you didn’t need to repeat it over and over again.

The game has a wild and dark sense of humor, and I found myself laughing at the oddest things could only make sense in this world. From the Mental Hospital doctor who has a split personality as a dancing king, the reanimated stuffed-whale raft, or from seeing their version of the Starship Enterprise with a 20 sided dice for the helm, the crazy never stops. Normally these things wouldn’t usually tie together but thanks to perfect art direction, the game makes everything work. Stick it to the Man has a dark feel to its animation, almost invoking a Tim Burton feel (old Tim Burton, not new Tim Burton). Every character has a distinct feel, look and voice which is normally hard to do, and they also found a good way to bring back characters from previous parts of the game during the later levels in ways that make sense, helping build the quality of the Stick it to the Man universe. 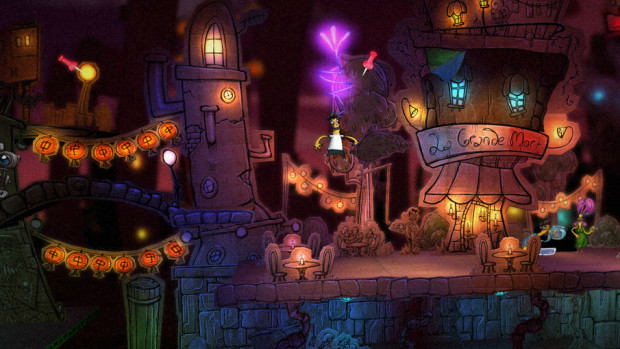 As most adventure games do, this one relies heavily on the voice acting to help deliver the story. All of the characters have a distinct voice, which is great news because without great voice acting, it’s hard to be motivated in type style of game. The music is super fun and sets the tone very well, and there is a very catchy tune that plays when the game turns on and that also runs over the closing credits. One of the cool parts which I think is probably exclusive to the PS4 is that they use the speaker on the Dual Shock 4 controller for the sound whenever you are mind reading people. It surprised me when I first did it, but I really grew accustomed to having it there. This was something unique and I hope we see more games try and use some of these features going forward.

There are 16 trophies in the game (1 Gold, 15 Bronzes), and none are awarded just for completing the levels. However, if you try to solve most of the puzzles in the levels you will unlock most through your journey. Because there is a chapter select, you can easily go back and clean up any trophies you may have missed.

Stick it to the Man is a great adventure title and I am finally happy to play it on the PS4. It takes advantage of the hardware in some unique ways that other games haven’t tried yet. If you are a PS+ member it’s a no-brainer to download and if not it still deserves your time and attention. It’s only about 3-5 hours long to complete everything, but you will have a great time.

Stick it to the Man Review

Game title : Stick it to the Man