From Patrick Plourde – Creative Director of Far Cry 3® – and Jeffrey Yohalem – winner of the Writers Guild of America Award – comes Child of Light, a digital title developed under Ubisoft Montreal.
Envisioned as a “Playable Poem” by its creators, Child of Light is a modern reimagining of our childhood fairy tales.

Set in the magical world of Lemuria, Child of Light takes us on the coming-of-age journey of Aurora, a young girl struggling to save a lost kingdom and her ailing father.
“Come, tuck yourself into bed
Let me tell a story.
Of Lemuria, a kingdom past
And a girl born for glory.”

The daughter of the Duke of Carniola is transported to Lemuria, a mysterious world that needs her help. Identified as the Child of Light and granted the power of flight, she takes on the minions of Lemuria’s Dark Queen in her quest to recover the sun, the moon and the stars to return home. Along the way she’ll discover that her destiny may be far greater than she ever dreamed.

Child of Light is a beautiful new RPG from Ubisoft Montreal, and it has been one of my most anticipated games over the past year. It uses the Ubisoft Framework Engine, the same one used for the latest entries in the Rayman Series, and it has helped to create a beautiful new world that everyone should start exploring.

Child of Light is a turn-based RPG set in the world of Lemuria. You play the role of Aurora, daughter of the Duke of Carniola. You are sick and thought dead, but during this lull you are transported to the world of Lemuria. Once you arrive you are recognized as the Child of Light… the person who will help save their world. Along the way exploring this colorful world, you will encounter several new friends who will join you and aid you on your adventure. 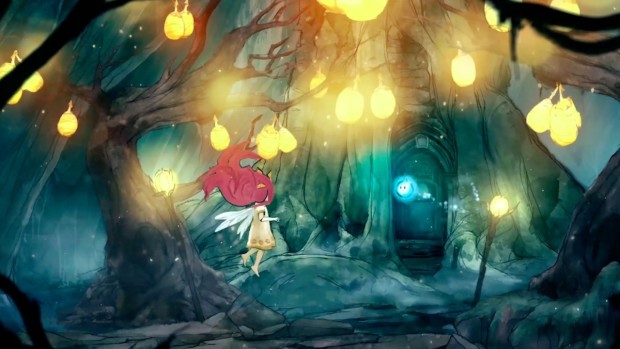 The story is a very personal one and it is written in Iambic Pentameter or poem. Everything rhymes and has been written with reason, crafting a beautiful story that you could miss if you don’t take the time to read the dialog or pay attention to the story. Like most RPGs it starts small, but it eventually grows exponentially and soon you are responsible for saving the entire world. I won’t get into the specific details as to not spoil anything, since it is something you have to experience.

As I said before the game is a turn-based RPG, and as all great RPGs do, this one has a great battle system. It uses a system similar to some of the older Final Fantasy Games, where all characters are on one meter at the bottom of the screen. When your character reaches the cast part of the meter, you can choose what action you would like to take place, whether it is attacking, defending, using potions, or switching your character. Once you choose the action you then have to wait for the action to happen. When you reach the end of the meter, your chosen action takes place. Your enemies are also on the same bar, so you can see well in advance when it’s their turn to cast. If you attack your enemy after they have chosen their action, but before they have taken the action itself, it interrupts their turn, putting them back further on the meter. However, the enemies can also do the same to you, interrupting your attacks and putting you back on the meter. This system is really simple and yet very deep, and anyone can enjoy it. It all comes down to timing and being prepared for what your enemy will do and what you are ready to do.

You also have control of Igniculus, a blue orb which can help you in battle and on the map. During a battle, you can put him over enemies and use his powers to slow down their progress on the attack bar, or you can use the power on your characters to help you get your health back. You can also use him on the main map to get hard to reach to items, light up darkened areas, or setup your enemies for sneak attacks, netting you advantages in battle. You can also have a second player take control of him as well, providing a unique co-op opportunity.

After battles, you receive experience points which can be used in your skill tree. Each character has 3 different paths and you can choose how you would like them to develop. I ended up using more points put into attacking power, but some people might put more emphasis on the passive skills or on defensive abilities. No two games will be same depending on what skills you choose for your characters.

The game is just over 12 hours long, which may seem short for an RPG, but I think it’s just right. There is nothing wasted in the story, no beats missed. I find that games with huge stories that go on for 60 hours are the ones I don’t tend to complete. I hope this trend continues in future releases because I think it makes it little more friendly to the average gamer, and a 12-20 hour long RPG that is great is better than a 100 hour long RPG that is average.

The art in the game in gorgeous, and it looks just like a watercolor painting. With them using the Framework engine from the Rayman series, they are able to hand-draw characters and place them directly in the game. This gives the game such a sharp visual look that you will not be able to find in any other RPG. Every character has it’s own distinct art style and perfectly matches the world. From the battles to the world, there isn’t a single thing wasted or out of place.

When you first load up the game you hear the musical score, and you know you are in for something special. The main score of the game sounds like they brought an orchestra in to play the music for you. It matches the story very well and helps immerse you in this special world even more. All of the sounds come together to give you a great gaming experience. 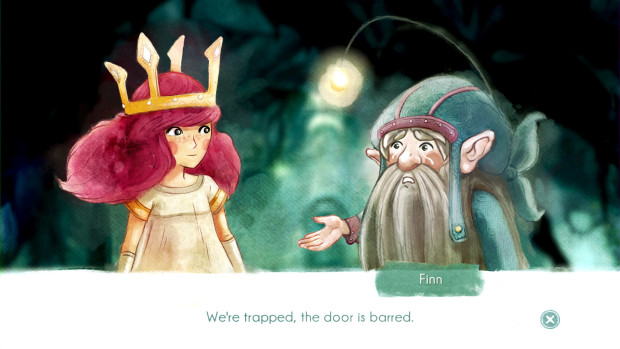 The game has 20 trophies: one silver and the rest bronze (the silver is for completing the game). You should get most of the trophies in your first play through, and it doesn’t take long to get the one’s you missed for getting 100% completion. I do wish they had done a bit more for the trophies, like putting some harder to complete ones or even a platinum, and I would have definitely played a New Game+ if it meant working towards the platinum trophy along with some extra content in the game.

Ubisoft Montreal created a winner with Child of Light. I am very impressed with them taking a huge chance on this game as it is not the norm. Some publishers would have not even let it get off the ground.This is why we need to support it and show publishers that they should be willing to take chances on games like these in the future. This is a special game that only comes around every once and while. It’s only $15 and it’s worth every penny. No matter what system you own, you must make it a priority to play this game.

Excellent JRPG that everyone should play.