Take your stunt bike on the road and survive the punishing challenges that lie ahead.

Take on an unlimited array of platform-racing challenges in the unreal world of Trials Fusion. Using your skills to traverse across obstacle-laden, ramp-ridden courses, you must strive to set track records against the best Trials players around the globe. Whether you’re racing alone, with friends, or in a global tournament, competition is always around you. And racing on official courses is just the beginning. A rich world of custom courses—built by some of the most creative and skilled content creators in gaming—awaits those who are continually searching for a new, insane track to conquer. And with long-term support of fresh features and content, the Trials experience will continue to expand and challenge players in new and exhilarating ways.

Up until this point, the Trials games had always been exclusive to the Xbox brand. As a Sony fanboy, I had always hoped to see it on PS3, but that never happened. Now, in the age of the PS4, we finally have our first entry into the Trials series. How does it hold up? Was it worth the wait?

Trials Fusion is a futuristic stunt bike racing game in which you need to reach your goal with as few mistakes as possible. From my understanding, this is set in the future of the other trials games and doesn’t have a huge connection with them. You drive through the level controlling your bike through obstacles, trying to reach the end with as few crashes as possible. It’s a fairly simple game in concept, until you play the damn thing. When you complete a level you are graded on time and crashes and are awarded a gold, silver, or bronze medal.

The control scheme is setup so that the two triggers act as your gas and brake, similar to other racing games. The key with this one is your left stick which adjusts the lean of your rider. This will control where the weight is being put and how your bike will control. You can put more weight on the back and pop a wheelie or more up front and have your weight pushing the front tire down. As you navigate the levels getting through them will depend on how you are leaning on your bike. Simple to learn, very difficult to master. You can also use the right stick to perform stunts while in the air.

The game starts off fairly simply, running you through tutorials and some easier levels. It really lets you learn before you start getting into more of the advanced levels. As you progress through the levels they get harder, but for the most part you are able to handle it, thus creating a false sense of security. When you reach the hard levels the difficulty goes through the roof and the game almost acts as a platformer and not as a racing game. When I was playing I was getting gold medals on the medium difficulty levels on my first attempts. However, when I hit the hard levels it just became about getting through the level, not necessarily about getting the gold. It was a really humbling experience.

Another cool thing when going through the levels is that you can see ghost racers of people that have played that level, coming from your friends list. As I was playing, I was consistently trying to beat specific racers and take their spot on the leader boards. It really drove me to get the best time possible. I also like that when one of my friends beats my best time, the game lets me know when I log in so that I can go after said target to recover my place at the top of the list. This game is really driven through the leaderboards.

Along with the options of getting medals in the levels, there are also tasks that need to be completed, which will net you more experience points, pushing your level up and giving you access to more upgrades. Some of these are based on completing flips, doing flawless runs, environmental items, or even not letting your front tires touch certain parts of the level. A lot of these are pretty cruel, so kudos to whoever manages to complete them all. 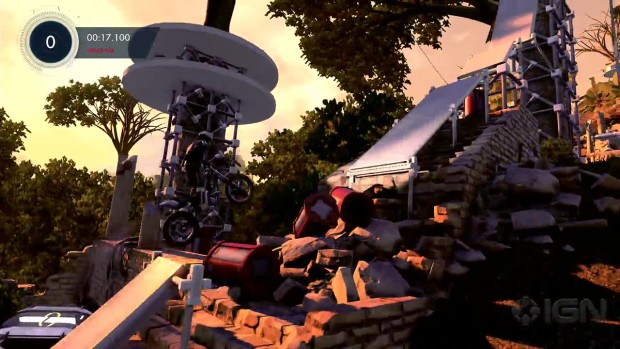 There is a track editor so you can complete your own custom tracks or race on other people’s tracks. This is a great way to get the community involved and receive an output of unlimited playing options. The game only features up to 4 player local co-op racing, and there is no online option for playing against friends. I did some research and the studio is planning something different from the last game, as their previous online play was not well received. That being said, it does make the game seem slightly unfinished. I understand that that it will be included in a later update, however, that seems like a large omission.

There are several ways to buy the game. It is available for $19.99 on the PSN or $39.99 with the Season Pass on the PSN. You can also get a disc based version at the $39.99 level with the season pass included. The reason I bring this up is because of the trophies. you see, there are only 16 trophies and no platinum trophy (or golds). I still think there should be a platinum included, especially for those opting to buy the $39.99 version as you would expect for other games at that price point. Also, some of the silvers are punishingly difficult and are not a great investment in a trophy hunters time. So, to sum things up: Trophy hunters be warned.

I really enjoyed Trails Fusion, even though at times it kicked my ass. It kept driving me to make that next jump or climb that next hill. This is something that I could see myself coming back to often and trying to reclaim my high scores. If you enjoy racing games or punishing difficult games then this is for you. There is a lot to like. 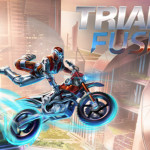