The critically adored and “sold-damn-well” Steam World Dig has finally made the jump from the 3DS to the PS4. How does it play out on the big screen? Keep reading to find out.

SteamWorld Dig is a platform mining adventure with strong Metroidvanian influences. Take the role of Rusty, a lone mining steambot, as he arrives at an old mining town in great need. Dig your way through the old earth, gaining riches while uncovering the ancient threat that lurks below…

Key Features
– A rich world of steam-driven robots, inspired by Steampunk and Western themes.
– Explore an underground world full of secrets, treasure and terrors.
– Uncover the remnants of human civilization, a degenerate race of dynamite-wielding troglodytes.
– Randomized worlds with emergent gameplay.
– Purchasing this content entitles you to both the PS4™ and PS Vita versions!

Steamworld dig sets you in a wild west run by robots. You are Rusty, a young robot who has inherited a mine from his long-forgotten uncle. With nothing else to do in his life, Rusty begins to dig away in order to see if he can earn himself a nice fortune.

The gameplay starts off really simple in the game. Armed with your pickaxe you begin to dig through your mine looking for riches. As you dig deeper you will find patches with minerals in them. Digging those parts up will give you a mineral, which you can collect take to the surface and exchange for cash. The catch is that you have limited inventory space and your lamp that lights the cavern runs out fast. Therefore, you end up making trips back to the surface world on a regular basis. 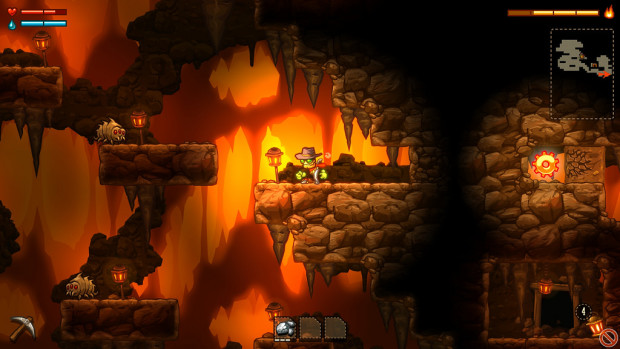 As you progress down further into the earth you will find mysterious rooms to be explored. Some will have extra minerals for you to collect, while others will reward you with new power-ups, such as a drill, a mineral detector, or speed boots. There are quite a few power-ups that you can earn through your journey, and they allow you to go back to previous areas in order to secure as many minerals as possible to upgrade your equipment.

Speaking of that, you can use your cash to purchase improvements such as health upgrades, a larger satchel, or more water for your steam powered weapons. However, you can also put the money towards upgrades to your drill, pickaxe, and punching ability. This starts to add new dynamics to the game as you can decide where to invest your money depending on your play style.

This game really feels like a great take on the “Metroidvania” sub-genre, but adds an addictive component with all of the mining where you are looking for more money to buy more upgrades and powerups. I could play focusing on the mining for a long time while ignoring the main goals of the game, and I liked it.

The graphics of the game look great on the big screen. Proper care was taken for getting them to 1080p. It’s 2-D and it’s gorgeous. I love the way the 2-D sprites look, and every character model has it’s own unique and distinct features. The different parts of the mine look great as well, starting off with the first one which is just more of a regular mine followed by the other areas that have a completely different flavor to them.

The music is great, giving a nice western vibe. It has all of the hallmarks of a great western movie in it’s music and sound effects. From the sound of the pickaxe, to the explosions of dynamite, and the sounds of the drill… everything just sounds great. 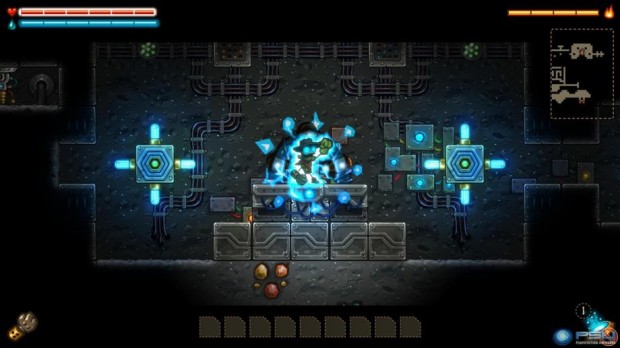 My only complaint is the size of the game. There are really three major parts of the mine to explore, and it doesn’t take long to get through them. My first run through clocked in at 4.5 hours and that was with extra time spent just mining. There’s also only one major boss fight in the entire game, right at the very end. It would have been great to see one or two more, maybe at the end of each section of the mine. These are what holds the game back from being perfect.

There are 14 trophies in the game (no platinum, unfortunately). That being said, trophy hunters will have some considerable hard trophies to aim for, such as doing a 2.5 hour speedrun of the game, getting through the whole game without dying a single time, and another one for getting all of the upgrades. If you are looking for a challenge, it is definitely here.

Steamworld Dig is a great game that you should play. If you own a PS4, put the money down for this one as it is worth it. After playing the game I see why it received all of the praise it did on 3DS, and I’m glad it made the trip to my big screen on the PS4. What are your waiting for… go buy it already! 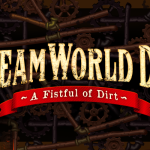 Great platformer with a unique twist