PS3 title Awesomenauts has received an excellent upgrade and is now on the PS4 as the new Awesomenauts Assemble!

Awesomenauts is a MOBA fitted into the form of an accessible 3-on-3 action platformer. Head out to the online battlefields together with your friends as an online party or in local split screen, and never worry about having to wait for an online match because of drop-in matchmaking!

Devise strategies as you upgrade and customize each character’s skills to suit your playing style.

Awesomenauts came to the PS3 in 2012, and it was a free PS+ game thus allowing it to get quite a bit of attention. Ronimo Games has decided to bring the game to PS4 with considerable upgrades, and it is now known as Awesomenauts Assemble.

Awesomenauts feels like a 2-D platformer/shooter hybrid in a lot ways. You are put on a team of 3 people, and you must battle another team of 3 people for control of the level. You will need to defeat the opposing team’s turrets and make your way to their core to destroy it in order to win the match.

You will battle the other team members as well as various other enemies in the level as you make your way their base. The game doesn’t really have a single player mode per-se unless you play strictly against bots… but the game is more fun when played directly against humans (as was to be expected) .

There are many characters for you to play as in the game. It starts off small with a selection of 3 characters, but as you progress through the game and increase your level with experience points, you can unlock new characters. When all are unlocked, you will be able to select between 15 characters, all with their unique play styles and skills.

The maps are interesting and provide a considerable amount of variety. They all have the turrets and cores, but each one has a very different layout and visual feel, as well as obstacles that will try to hinder your progress. 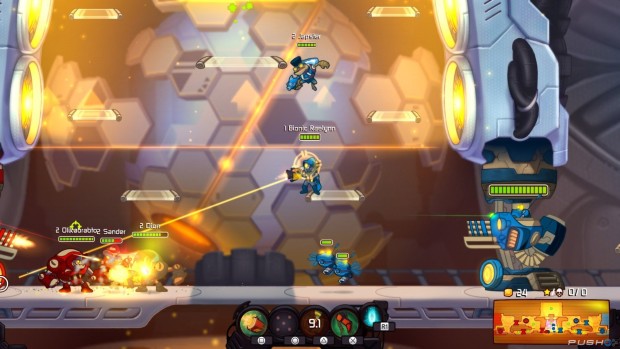 As you go through the levels, killing the opposing team or destroying targets, you will unlock solar which you can use to purchase upgrades for your character. There are many options, and depending on how you want to play you will have a considerable freedom for creating a character just the way you want it. So even if you see someone playing the same character as you in the level, you might have a completely different setup. You also get a chance to change your character’s load-out when giving you more freedom for creation. I love the customization options since it gives this unique game a bigger edge.

The game looks gorgeous. One of the big upgrades on the PS4 is that the game is running in 1080p. This makes the 2-D models look gorgeous, and everything looks distinct and stands out. This is important to the game play because, with so much action going on in the screen, you want to be able to pay attention to everything. It looks like a Saturday Morning cartoon that I would watch when I was a kid, which makes me appreciate the design aesthetic even more. 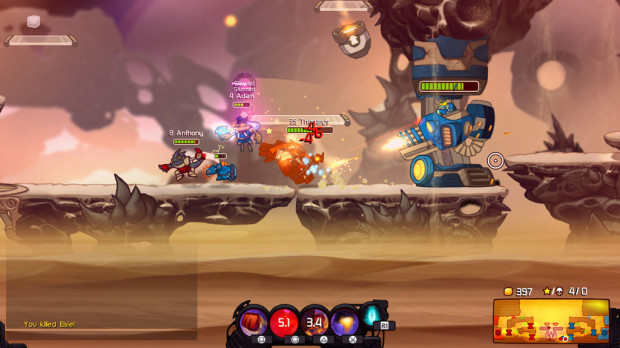 The sounds design in the game is really strong. Each character has its own voice, and all levels feature some really cool sounds to go along with the hectic action. The only issue I had here was that as you play for longer sessions you begin to hear a lot of the same commands over and over again. If you establish a favorite character, you will feel that.

There are 21 trophies in the game, and they’re all bronzes. A lot of them you will get naturally through playing, but it will take you some real time and dedication to unlocking the others. It would have been great to see a few silvers and golds thrown in, especially on the harder trophies or the time consuming ones.

Awesomenauts Assemble is a great online or local couch co-op game to enjoy with your friends. You get a ton of variety in the game thanks to a huge cast of characters, and no game will feel the same as you will always be up against different teams. This is a definite recommendation if you would like to try something different and new. If you played Awesomenauts on the PS3 and enjoyed it there is a lot here for you as well to invest in an upgrade. 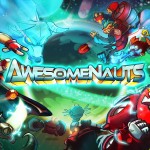 Awesome ( No pun Intended) Game for Parties or strategey lovers.