Super Motherload puts players in the shoes of miners that are out to make the most money in the shortest amount of time by taking on a dangerous mission in Mars. You can take on this task either by yourself or with friends since the game features 1 to 4 players local co-op, but the more people that are around for the job the better you must be at coordinating your actions.

The main objective for Super Motherload is collecting all the minerals under the surface of Mars, doing so in several trips back and forth between the comfort of the surface and the unknown dangers of what lies beneath the soil. At first you will be making some very short trips because your vehicle is not fully equipped and thus has a small cargo space to store the minerals you collect, and it also has a small fuel tank for your trips. Once you run out of fuel, you can’t dig anymore, and of you must go back to the surface. One other element you must take into consideration is the strength of the hull that protects your vehicle because if you fall from a great height, or crash into a wall at a high speed, your hull bar will decrease, bringing you closer to death. 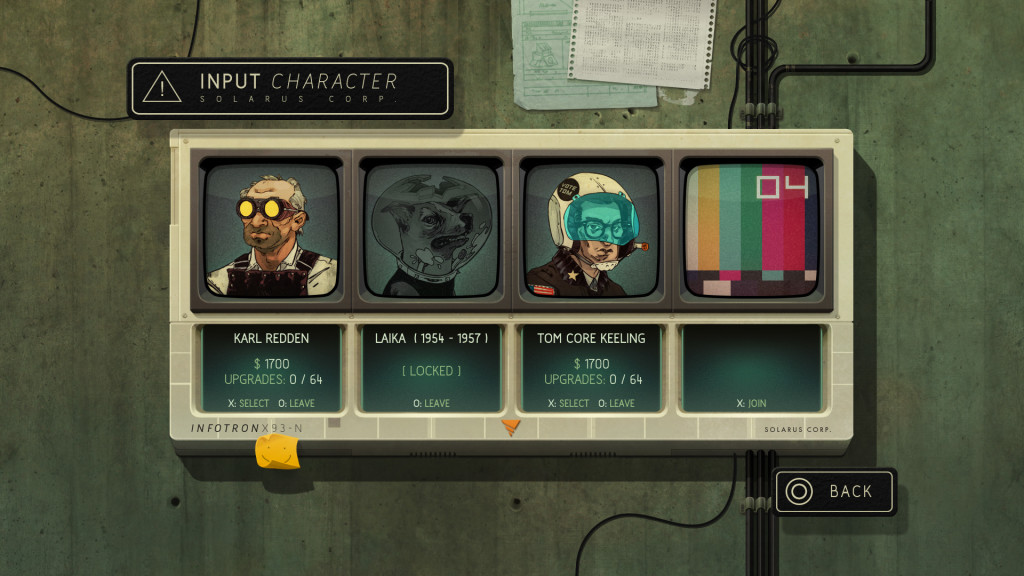 Minerals can be sold for cash, and said cash can be used to refuel your vehicle, repair its hull, and to upgrade its speed, hull strength, drill strength, drill speed, fuel tank or cargo space, to name a few. Without a stronger drill and a bigger fuel tank, you will never be able to reach the subterranean facilities where more upgrades can be bought, and which serve as your new “base of operations” in order to continue digging deeper and deeper into the planet.

In order to maximize your mining runs, there are some things you can do:

a) Collecting the same mineral over and over in a row will activate a multiplier that grants you some extra cash for every single mineral you add to the chain. This requires some planning because you must carefully dig only the same type of mineral to not break the chain (and if you’re going for a particular trophy, you need a 50 mineral chain).

b) While digging for minerals, you should try to not get ANY damage on your vehicle, fill up your cargo and return to base before running out of fuel. Doing this will grant you a cash bonus for each of these things that you do. As long as your cargo is full, you will get a bonus for that, but if your cargo is not full, then you won’t activate the fuel and hull bonus when you return to base.

c) Combine minerals. At the store, you can upgrade your smelter to combine the last two minerals you dug, as long as said combinations is one of the available combos. To make it easier on your end, you can look at the Combos screen when you press the help button on the Dualshock 4 and scroll to said option on the menu. Combining minerals allows you to earn more money since the combined mineral is always worth more than the minerals used AND it also frees up cargo space because you used to have two minerals, and now you have just the one. Again, only the last two minerals you dug count for combinations, so do plan accordingly. 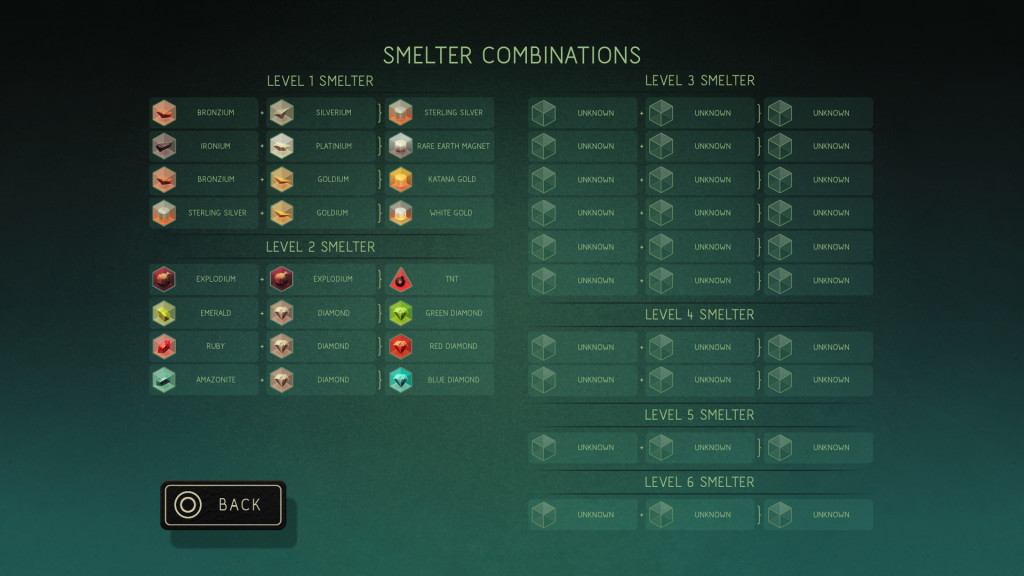 To progress in the game, you’ll need to purchase bombs at the store, dig them from the soil or create them by combining minerals. You will also need to learn how to use them because, if you’re not careful, the blast from the bombs will end up destroying the precious minerals you were trying to reach. The blast from each bomb is as follows:

a) TNT: This blast will be one space wide around your vehicle, thus forming a square.

b) C-4: Like the TNT blast, but this powerful explosive’s effect will be two spaces wide all around your vehicle.

c) T-Bomb: Just like its name says, the blast will be one space up and 3 spaces wide from your vehicle.

d) Shaft bomb: These ones are tricky but helpful. The blast will be 8 spaces in total – 4 above and 4 below your vehicle. Excellent for quickly moving further into Mars, or for opening an exit route.

e) Electron bomb: A special kind of bomb used to destroy plates in your way, turning them into hot, hot melted steel. 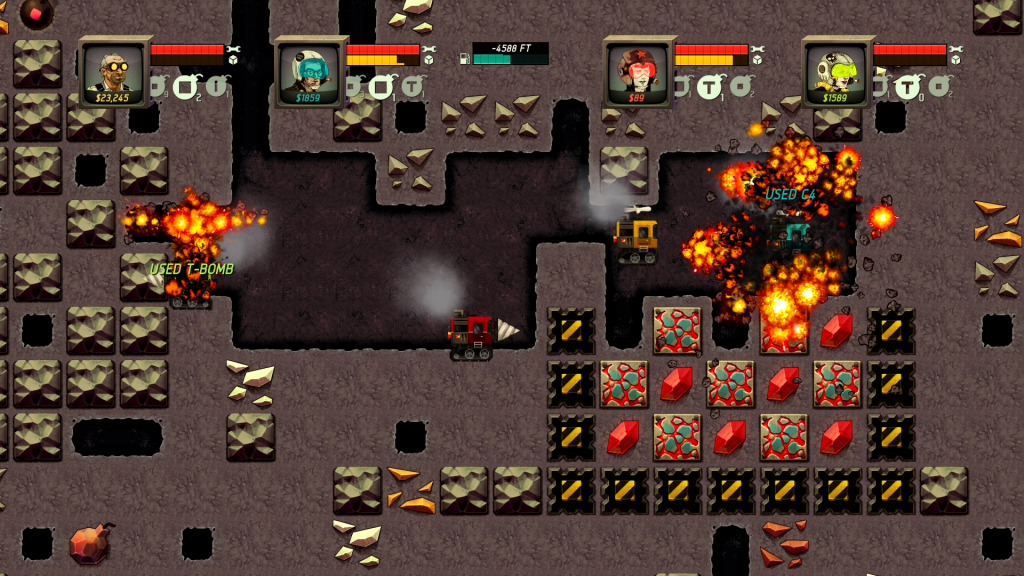 Speaking of bombs, the Dualshock 4 Touch Pad can be used to trigger any bombs you might have, depending on the direction you swipe on it, or if you press it. Left is for TNT, up is for C-4, right is for T bombs, down is for Shaft Bombs, and pressing the Touch Pad will trigger an Electron bomb. By making the most of this, you will cut precious seconds from every single run you make, thus allowing you to collect more minerals in less time and spend less money on wasted fuel.

The good thing about multiplayer is that it is “jump-in jump-out” which means that anyone can join at any moment without breaking the flow of the game. Even though you are all working together to dig deeper into Mars, each player is still aiming to secure the most minerals (as well as those of the most value) to increase their personal riches. While in multiplayer, everyone shares a single fuel tank, so be sure to communicate between each other, so you don’t waste any precious fuel.

Said fuel is even more important during Hardcore mode since in this mode running out of fuel means you’re dead. Not “guess I’ll respawn soon” dead but “your character is gone, all upgrades are reset and you just lost all of your items and money as well” dead. Hardcore mode does its name justice, and should only be engaged by those that have already played the game on Normal and know how things work.

Every time you start a new game, Mars will be different. Terrain is randomly generated at the start of each new full run, and you will find new puzzles to solve and new mineral formations to collect. You might notice a heart-shaped cavern on one game, or a rock formation in the shape of a skull during another run, and this helps every game feel a bit different.

During your mining, you will slowly unravel the story around what happened to the other miners sent before you, and in order to advance the plot, and gain access to some extra upgrades, you will need to retrieve specific items at crucial points of the story. There are some interesting plot twists to the story that keep you going and going, but I won’t spoil them for you in here. Play and learn! 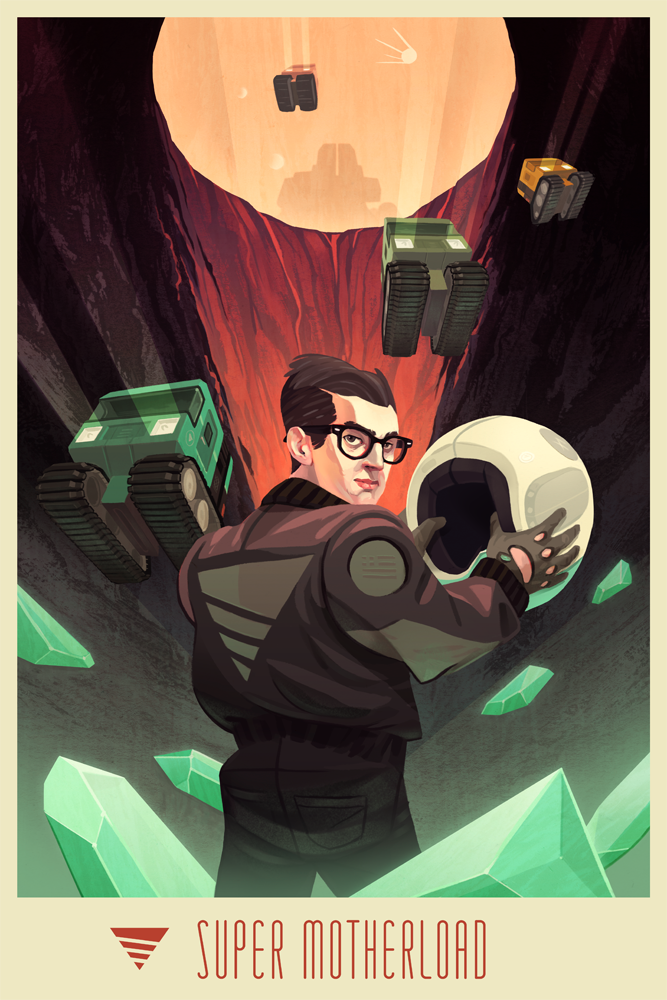 Super Motherload is a very addictive game. The gameplay is easy to learn, but there is more depth to the game than the simple “dig for minerals, sell them, repeat” description you might see around the internet. The careful planning needed to maximize your mining, the huge number of upgrades to purchase, the great music and fun gameplay mechanics kept me coming back for more. It is one of only a handful of games I played this year that I immediately started to play again as soon as I had watched the credits roll, and I hope it has the same effect on you. 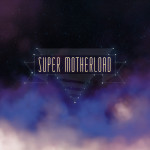